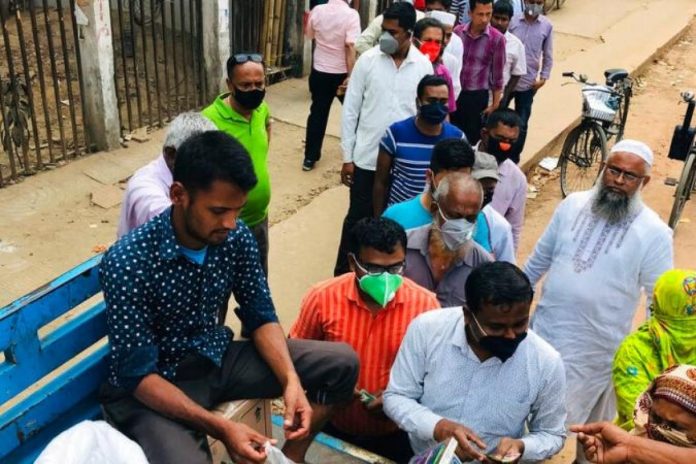 As the number of confirmed cases of the novel coronavirus continues to rise in Bangladesh, experts say the South Asian nation may see a peak in infections in the next two weeks.

The country on Monday registered 1,602 new infections of COVID-19, with 21 deaths, marking the single day record in the country of around 165 million population.

“Bangladesh may see a peak in COVID-19 cases in next two weeks or so,” said Dr. Bijon Kumar Sil, leader of a Bangladeshi research team at Gonoshasthaya Kendra Hospital that invented a $3 test kit that can detect the coronavirus in less than 15 minutes.

Since the first positive cases of the virus was recorded in the country on March 8, both the cases and deaths have continued to increase manifold.

As the world still waiting for a vaccine to fight the virus, Bangladeshi experts and virologists consider natural herd immunity among a majority of the population as the strongest weapon against the virus.

Dr. Sil told Anadolu Agency that after getting the final approval from the government about using their indigenous test kit they could begin the rapid testing ant then the number of infections could be reduced accordingly

Sil had also invented a similar kit for detecting the SARS coronavirus while working in Singapore during the outbreak in 2003. The Chinese government bought the patent for the kit.

“Infections can be controlled in two ways: by immediately isolating those who got infected with the virus and those who come into contact with infected persons and locking down the surroundings as well,” he added.

However, he warned that this method “is no longer effective for Bangladesh as coronavirus carriers have already spread across the country and it has spread through the air.”

“The second one is to control the peak by developing herd immunity and antibodies in the human body against the virus,” he added.

He went on to say that developing herd immunity and antibodies are the only option for the country as “we cannot confine people for such a long period of time.”

Bangladesh has been under severe lockdown since March 26, however thousands of workers in garment factories violated the restrictions traveling to the capital Dhaka after several factories resumed operations earlier this month.

“Some of the population has already developed coronavirus antibodies … as we have found in our study,” according to dr. Sil.

“Now it is time for large-scale blood testing in communities to know how many people are developing antibodies against COVID-19, and if it covers over 50% of the community then automatically the disease has been brought under control,” he noted.

He proposed for developing a government-backed action plan for conducting the blood testing.

Dr. A.S.M. Alamgir, chief virologist at the Institute of Epidemiology, Disease Control and Research, also echoed Sil, adding that the pace of infection growth “may decline after the end of May and community transmission may remain tolerable compared to some other countries.”

“The virus infections might not have crossed 1,000 in Bangladesh if the garment factory owners had not opened their factories in such a way,” he added, blaming the factory owners for sudden announcement to resume operation that leads thousands of low-income workers to rush to the capital city in mass.

Most factories reopened this month after the government eased the lockdown and allowed owners to operate under the government guidelines of social distancing and other coronavirus protective measures.

If the country can be successful to “break the chain of coronavirus transmission”, a downward trend can be seen from the start of next month, he said, underlining that most of the part still under complete lockdown.