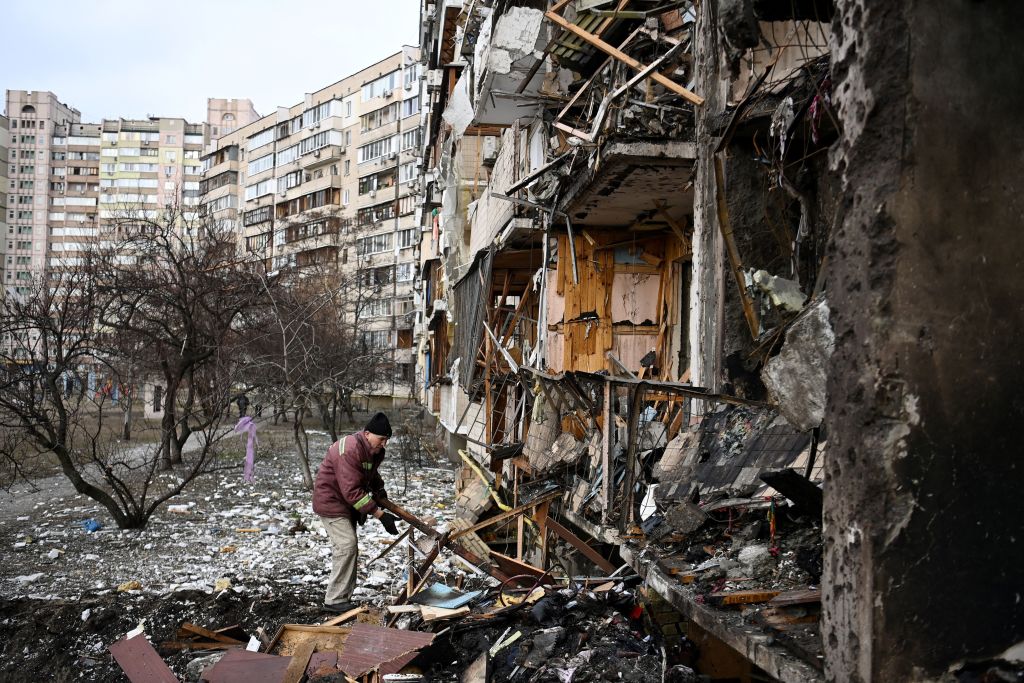 TOPSHOT – A man clears debris at a damaged residential building at Koshytsa Street, a suburb of the Ukrainian capital Kyiv, where a military shell allegedly hit, on February 25, 2022. – Russian forces reached the outskirts of Kyiv on Friday as Ukrainian President Volodymyr Zelensky said the invading troops were targeting civilians and explosions could be heard in the besieged capital. Pre-dawn blasts in Kyiv set off a second day of violence after Russian President Vladimir Putin defied Western warnings to unleash a full-scale ground invasion and air assault on Thursday that quickly claimed dozens of lives and displaced at least 100,000 people. (Photo by Daniel LEAL / AFP) (Photo by DANIEL LEAL/AFP via Getty Images)

A Bangladeshi sailor has been killed in an attack on his vessel in the Ukrainian Black Sea port of Olvia, the state shipping company said Thursday (3).

The Banglar Samriddhi, a bulk carrier, arrived in the country on February 22, a day before Russia invaded, and has since been unable to leave.

Pijush Dutta, executive director of the Bangladesh Shipping Corporation, told AFP that the vessel was hit in a “rocket or bomb” attack on Wednesday.

The third engineer was killed and the bridge caught fire, he said, but the remaining 28 crew — all Bangladeshis — were still on board.

“The fire has been brought under control,” he added. “Other crew in the ship are safe.”

The ship had been due to bring clay to Bangladesh for the country’s booming ceramics industry but has been unable to depart Olvia as there were fears mines had been laid in the channel to the port, he said.

Asiful Islam Asif, one of the crewmembers, made an impassioned video appeal for help, saying reports of their evacuation to Poland were incorrect.

“Please rescue us,” he said in a video message aired by the Bangladesh private Channel 24 television station.