Modi, Biden review India-US ties during their meeting in Bali 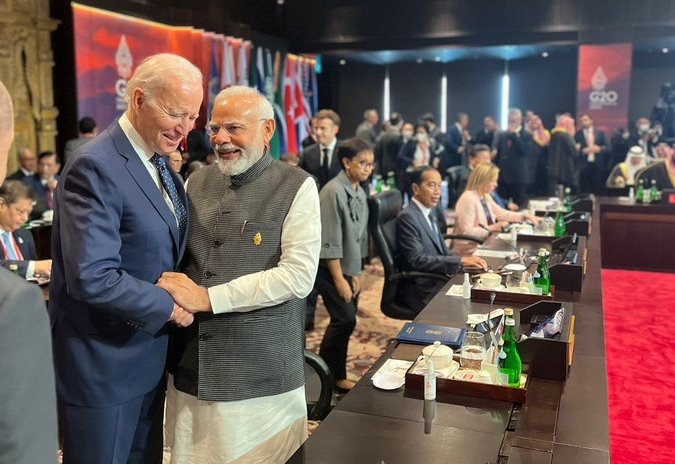 Prime Minister Narendra Modi and US President Joe Biden on Tuesday reviewed the state of India-US strategic partnership including in sectors like critical and emerging technologies and artificial intelligence.

It is understood that Modi and Biden also touched upon the Ukraine conflict and its implications in their meeting that took place on the margins of the G-20 summit in this Indonesian city.

In its readout, India’s Ministry of External Affairs (MEA) only said that the two leaders also discussed “topical global and regional developments” in the meeting.

“They reviewed the continuing deepening of India – US strategic partnership including cooperation in future-oriented sectors like critical and emerging technologies, advanced computing, artificial intelligence, etc,” it said in a statement.

“He expressed confidence that both countries would continue to maintain close coordination during India’s G-20 Presidency,” it said.

The MEA said the two leaders expressed satisfaction about the close cooperation between India and US in new groupings such as Quad and I2U2.

While the Quad comprises India, the US, Australia and Japan, the members of the I2U2 are India, Israel, the US and the United Arab Emirates.

Agreed to maintain close coordination during #G20India,” he tweeted.

Modi and Biden held the conversation days after External Affairs Minister S Jaishankar met US Secretary of State Antony Blinken on the sidelines of the ASEAN-India Summit in the Cambodian capital of Phnom Penh last week.

Jaishankar and Blinken discussed a range of issues including bilateral ties, the Ukraine conflict and the situation in the Indo-Pacific among others.

Since the Ukraine conflict began in February, Prime Minister Modi spoke to Russian President Putin as well as Ukrainian President Volodymyr Zelenskyy a number of times.

In a phone conversation with Zelenskyy on October 4, Modi said that there can be “no military solution” and that India is ready to contribute to any peace efforts.

In his meeting with Russian President Vladimir Putin in the Uzbek city of Samarkand in September, Modi conveyed to him that “today’s era is not of war”.

India has not yet condemned the Russian invasion of Ukraine and it has been maintaining that the crisis must be resolved through diplomacy and dialogue.