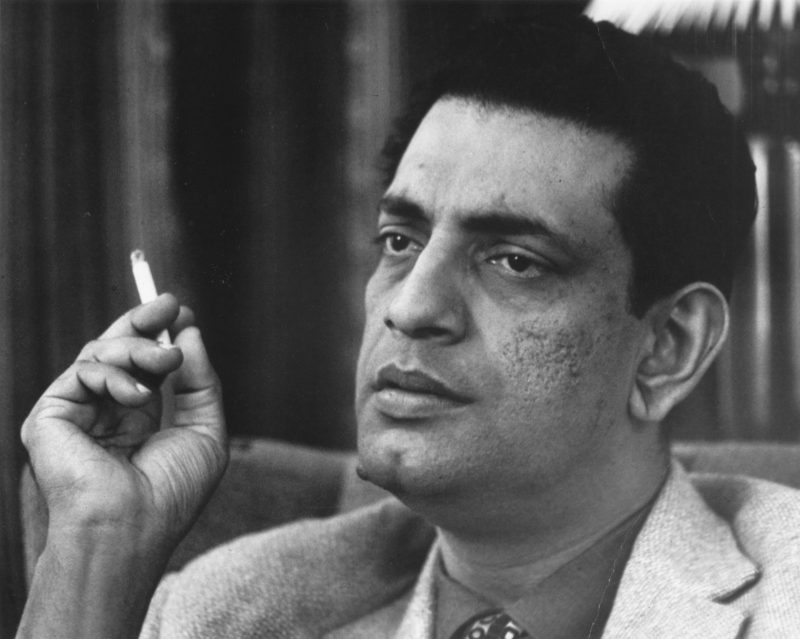 Sangeeta Datta explains how she structured the BFI’s Ray season

My first meeting with Satyajit Ray was on my graduation day at Jadavpur University in Calcutta (now Kolkata).

It was convocation day and we were getting our degrees. Ray was stood at the back of the hall after he was awarded his honorary DPhil degree by the vice-chancellor. I summoned up enough courage to ask for an autograph and tell him about our University Film Society.

The very tall and authoritative figure smiled and obliged with his autograph. He also asked us to visit him and discuss our plans for the film society.

Walking into his study at his Bishop Lefroy Road apartment was like entering a sacrosanct space. This world cinema icon sat at his desk flanked by two large windows, shelves and tables spilling over with books and handwritten scripts and sketches. He took great interest in advising us about programmes for our film society.

Ray had started the first film society in India with his friend and movie critic Chidananda Dasgupta (filmmaker Aparna Sen’s father). They liaised with international embassies and brought many films which were screened through a little projector on Dasgupta’s balcony.

When Ray travelled to work in London for six months, he watched a film almost every day. After watching Vittorio De Sica’s Bicycle Thieves, he came out of the cinema hall, his mind firmly made up, that he would be a filmmaker. He had illustrated a children’s book adaptation of Pather Panchali (a novel by Bibhutibhushan Bandopadhyay). The story idea of the two children, Apu and Durga, in a Bengal village was already in his mind and he had started storyboarding as well. He started filming with a group of friends, over the weekends, putting his own money into it and later pawning his wife’s jewellery to finance the project.

Pather Panchali opened at the Museum of Modern Art in New York, and the world was stunned with the new film language and craft that Ray and his team displayed in their debut film. The movie went on to receive accolades and awards in the western world, including Best Human documentary award at the Cannes Film Festival.

In India, this film language was new as the audiences were used to dialogue-heavy films with song and dance. But Ray’s humanist spirit shone through, and his story-telling techniques made Apu and Durga iconic in world cinema. Ray himself has often acknowledged the influence of Italian neo-realism in creating a new film language in Indian cinema. He also spent time with the French filmmaker, Jean Renoir, while scouting for locations in Calcutta for his film, The River.

I hold subliminal memories of the film Pather Panchali, of the two children hopping behind the sweet seller, Apu running through the fields to see a train for the first time, and the tragic sequence of Durga’s death.

As a child, I remember Ray’s musical Goopy Gyne Bagha Byne released to much fanfare in Calcutta. Adapted from his grandfather’s popular children’s story about a singer and drummer who receive three boons from the King of Ghosts, the film was a runaway hit, a fantasy with a strong anti-war message that is as relevant in our conflict-ridden world today as it was back then. The younger generation will both enjoy the film and have lessons to take away from it. This is a recommended family viewing opportunity.

Musician-composer Soumik Datta, struck by the anti-war message, wrote a complete score and played with various live orchestras around the world with a shorter version of the film.

They opened at the Edinburgh festival, then played at South Bank Centre in London and later at the Globe, who also published the music. The incredible audience reception once again proved the universal power of music and cinema.

When I was invited to programme this major Ray season at the BFI [British Film Institute], it came as a huge honour. I thought I would depart from the chronological Ray seasons and grouped the films thematically.

Every filmmaker has central concerns or philosophies that emerge from their ouvre. So did Ray. A humanist always, he probed into the continuum of life and placed family life at the centre of every axis of change. The Apu trilogy follows the young child Apu in the village to adolescence in Benaras and young adulthood in Calcutta. Starting with Apu and his well-meaning father, to the last film where Apu is finally reunited with his young son Kajol, the father and son theme comes full circle. The clash of moral values is a repeated theme in Ray’s work and cross-generational audiences may relate to it.

In the “Women Question” theme, I have Mahanagar (a BFI re-release) which, along with Charulata, are Ray’s strongest feminist films. Mahanagar captures the economic crisis in Calcutta when the woman has to step out in search of a job, shifting family dynamics. Arati’s confidence and courage elevate her in the gallery of women-centric films Ray made.
In the [Rabindranath] Tagore adaptations Charulata and Gharey Bairey, the conflict between tradition and modernity plays out in the life of the woman. Today the feminist debate is crucial to young people and Ray’s exploration of his female characters would engage young audiences as would his detailed period art direction for sets, costume and music.

The city trilogy of 1970’s Calcutta which we wat­ched in our early teens are Ray’s strongest politically inflected films. Through the fabric of family and larger society, he tells the stories of a graduate who desperately looks for a job (The Adversary); an ambitious officer who stifles conscience to rush up the corporate ladder (Company Limited); and a young jobless graduate who starts his own business, unaware of impending moral crisis (The Middleman).
“Histories of the Land” features Ray’s Hindi feature Shatranj ke Khiladi, a beautifully detailed film of two chess addicts who play on while the world changes around them, and the British annex the state of Lucknow in north India .

“Travel Stories” are films in which characters and perspectives shift during travel. The screen hero in Nayak is on a train journey when an encounter with a young journalist triggers his deep insecurities and trauma; a dysfunctional family sheds its gloom when they sight the Kanchenjunga mountain, a group of young men examine their shallow urban lives when they visit the forests in one of Ray’s perfect screenplays Days and Nights in the Forest.

Then there are the detective stories The Golden Fortress and The Elephant God. Those who grew up on Ray’s detective fiction can take their children to watch Soumitra Chatterjee’s Feluda and that famous camel ride with a theme tune that has thrilled successive generations.
After Ray’s death, we organised a public retrospective of his films in Bombay (now Mumbai).

Over 10 days we watched his films from evening until late into the night, in chronological order. That is when I gained a full perspective on his works, his extraordinary film craft and giant humanism, his empathy for the common person, his deep understanding of life, his sketches and original scores, his art design and costume, the giant vision of an artist. It was life-changing for me.

For anyone planning to catch the films at the BFI over the next two months, it is a lifetime opportunity to know one of the great masters of world cinema, of whom Akira Kurosawa had said: “Not to have seen the cinema of Ray means existing in the world without seeing the sun or the moon.”

The Return of Faraz Ali: Debut novel helps author define her ties with…