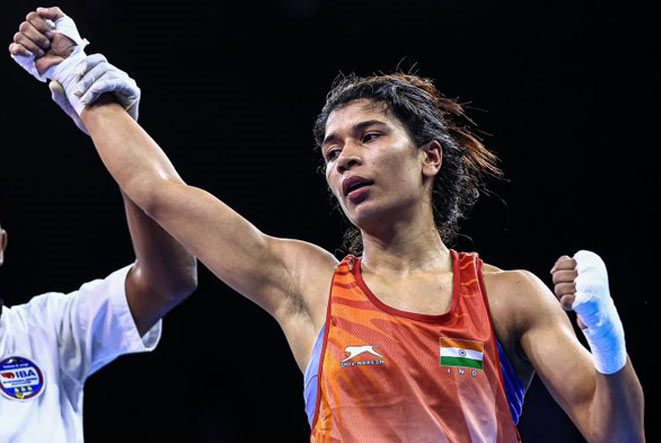 Since winning a gold medal in flyweight division at the Women’s Junior and Youth World Boxing Championship in Turkey in 2011, it has been a difficult journey for Zareen.

Fresh from her exploits at the World Boxing Championship, Nikhat Zareen has now firmly set her sights on being the first among equals at the Paris Olympics with a top podium finish during the 2024 edition of the quadrennial extravaganza.

Zareen clinched the coveted gold in the flyweight (52kg) division with a facile 5-0 win over Thailand’s Jitpong Jutamas in the final of the Women’s World Championship in Istanbul on May 19, thus becoming only the fifth Indian boxer to be crowned world champion.

“I am happy that I have won a gold in the World Championships for the country and in future too I would like to put in more hardwork and keep on winning medals for India,” Zareen, also a 2019 Asian Championship bronze medallist, said during a felicitation function organised jointly by the Sports Authority of India and national federation (BFI) in New Delhi on Tuesday.

“Olympics is my ultimate goal but to achieve success there I will have to put in lot of hardwork because I know how big a competition Olympics is? I have to give double the effort I have done till now.

“Now there is more responsibility on me.”

Since winning a gold medal in flyweight division at the Women’s Junior and Youth World Boxing Championship in Turkey in 2011, it has been a difficult journey for Zareen.

In the 2019 edition of the senior World Championships, Mary Kom was preferred over Zareen because of her consistent performances despite the latter asking for a fair trial from the BFI. Mark Kom went on to claim her eighth world medal, a bronze.

“The journey has been pretty good. It was not easy as I have witnessed many ups and downs but that motivated me to stand where I am today,” an emotional Zareen said.

During the event, BFI president Ajay Singh reminded Zareen of her future targets.

“I want special commitment from Nikhat (Zareen). Today, she is standing here as world champion but next time she should stand here as Olympic champion,” he said.