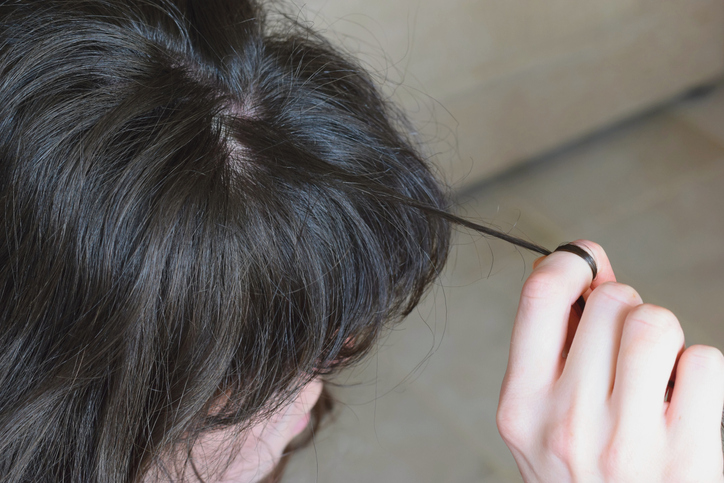 It is estimated that in the UK, trichotillomania, or TTM, affects around 350,000 people. and most of them are women.

According to the NHS, TTM, also known as trich, is when a person cannot resist the urge to pull out their hair. They may reportedly pull out the hair on their head and in extreme cases from their eyebrows or eyelashes as well.

Originally, TTM was classified as an obsessive-compulsive disorder or a form of self-harm.

However, experts now recognise trichotillomania as a “body-focused repetitive behaviour,” along with nail-biting and skin picking.

Becka Gaul, 28, from Oxford recalls her trichotillomania began when she was just 11 after stressing over her SAT exams.

Becka who supposedly has a recurring dream where she wakes up with a full head of flowing locks is now talking about her condition to raise awareness of the rare condition, the Mirror reports.

She is reported to have said, “I often have dreams where I wake up one day and my head is completely full of hair, and then I wake up for real and I’m really sad about it. I start the day with disappointment.”

While growing up, Becka’s hair loss made her a target for bullies which inevitably made the condition even worse for her.

Speaking about the first time she pulled out her hair, Becka is quoted as saying, “I was getting really, really stressed,” I pulled a hair one day, and it just kind of made things better. So, I kept doing it.

“It didn’t hurt at all. I’d run my fingers through my hair to find any strands that felt different from the others – like when you get a crinkle in your hair.

“I’d single them out and pull them one strand at a time. It wasn’t a massive deal at first – it was just a couple of strands here and there.

“But then it just progressed until I had a 50p-sized shape on top of my head that had no hair on it.”

Hair loss and TTM expert Lucinda Ellery, in an earlier report in the Mirror is quoted as saying, “So many young women are stuck in a destructive ‘pulling’ cycle and are too ashamed to seek help.”

She adds, “A woman’s hair is her crowning glory, it’s the very essence of what makes her feminine. But these women have an overwhelming urge to pull it out.”

Stressed by the bullying, Becka reportedly confided in her mother who took her out of school and decided to educate her daughter at home.

But though Becka did well in her studies, she just couldn’t get rid of her obsession with tugging at her hair.

TTM has also been the reason Becka faces constant anxiety. She even missed her GCSEs because she just couldn’t face going to her exams.

Commenting about her hair pulling, Becka explains, “To me, it’s a comfort thing. “I don’t always know I’m doing it, it’s very subconscious.”

Due to her condition, at the age of 15, Becka needed a wig to hide her balding scalp. However, the wig didn’t seem to solve much, as for Beckha, the “hair pulling was uncontrollable. Once it started there was no stopping it. I even pulled my eyelashes and eyebrows out. Some of the eyelashes hurt, but everything else just felt comforting,” she said.

And though she tried to get help from a GP and even tried to get a wig through the NHS, unfortunately her request was turned down for “vanity reasons.”

“My GP didn’t really have an explanation for what was going on, I had to do my own online research to work out I had trich,” Becka informs.

She reportedly said, “When I tried to get a wig on the NHS I was declined – I was told it wasn’t for a medical reason, like alopecia or chemotherapy, it was vanity.

“At that point, mum was buying wigs for me at anything from £80 to £180. They were synthetic and got ruined quite quickly, so I needed a new one every few months.

“I hated the look of them, and didn’t want anyone to see me or know that I was wearing one.”

One salvation, for Bekha has reportedly been her 29-year-old partner, Paul Comley.

Speaking about the habitual hair pulling and severity of the condition, the Trich expert, Lucinda reportedly said, “It’s a clinical disorder – sufferers are either unaware they are even doing it or simply can’t control it. And over time it becomes an addiction that is very hard to break.”

Though there is no known cause or cure for TTM, experts believe people may have a genetic predisposition.

The NHS explains that TTM though triggered by stress or anxiety can also be caused by chemical imbalances in the brain or changes in hormone levels during puberty.

It is also more common among teenagers and young adults.

Additionally, though the trigger may be stress or trauma, trich may also occur for no obvious reason.

The NHS recommends speaking to others and working out the triggers for one’s hair pulling and trying to understand how to avoid these triggers may help to manage trich.

Replacing the action of hair pulling with another action like squeezing a stress ball may also help.

Also, if your GP thinks you have trich, you may be referred for cognitive behavioural therapy (CBT) which is a type of treatment that involves talking therapy and is commonly used to treat depression and anxiety.

And though Becka is hoping that 2023 will bring a cure for her condition, she states, “My ultimate goal is to find the willpower to stop!”