Writers, friends gather in support of Salman Rushdie, read from his works at solidarity event at New York Public Library 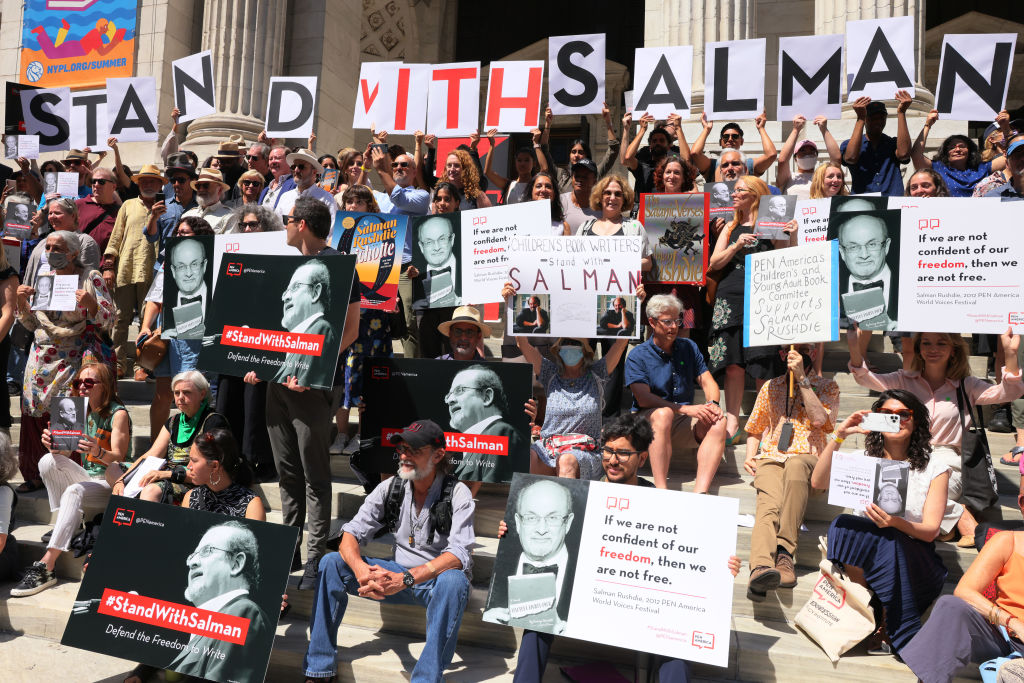 A week after author Salman Rushdie was stabbed onstage at a literary event, writers and friends of the Mumbai-born author gathered at the New York Public Library here and read from his works, expressing their solidarity with him and his relentless advocacy for free expression.

Literary and advocacy group PEN America, which Rushdie had helmed as President, his publisher Penguin Random House, the New York Public Library, and House of SpeakEasy on Friday hosted the Stand With Salman: Defend the Freedom to Write’, a special solidarity event that brought together authors, activists, and friends in support of Rushdie.

Authors, writers, artists and members from the literary community, including Tina Brown, Kiran Desai, Aasif Mandvi and Reginald Dwayne Betts read from some of Rushdie’s most celebrated works and wished the 75-year-old Booker Prize winner a speedy recovery.

PEN said through the event, that writers from around the world stand in solidarity with Rushdie and “celebrate his tireless advocacy for the freedom of expression and the plight of imperilled writers around the globe.

The event was hosted exactly a week after Rushdie was stabbed in the neck and stomach onstage in front of a stunned audience by 24-year-old New Jersey man Hadi Matar before the Satanic Verses’ author was about to speak at an event at the Chautauqua Institution in western New York.

Rushdie, the Mumbai-born controversial author who faced Islamist death threats for years after writing ‘The Satanic Verses’, was airlifted to a local trauma centre and put on a ventilator and underwent several hours of surgery.

When a would-be murderer punched a knife to Salman Rushdie’s neck, he pierced more than just the flesh of a renowned writer. He sliced through time, jolting all of us to recognise that horror of the past is haunting the present, CEO of PEN America Suzanne Nossel said at the start of the event.

She said that Rushdie has been a constant, indefatigable champion of words and of writers attacked for the purported crime of their work. Today, we will celebrate Salman for what he has endured, but even more importantly, because of what he has engendered the stories, characters, metaphors and images he has given to the world.”

Two days after the attack, his son Zafar Rushdie had said in a statement that his family is extremely relieved that Rushdie was taken off the ventilator and additional oxygen and was able to say a few words.

?Following the attack on Friday, my father remains in critical condition in hospital receiving extensive ongoing medical treatment, the statement had said. Though his life-changing injuries are severe, his usual feisty and defiant sense of humour remains intact, he said.

Matar was arrested and charged with second-degree attempted murder and assault. He pleaded not guilty to the charges and remains in Chautauqua County jail.

PEN America said that in addition to the Manhattan rally, public readings of Rushdie’s works were encouraged around the globe as well as online with the hashtag #StandWithSalman to remind Rushdie of both the affection that writers and readers have for him and their solidarity with his unrelenting belief in the right of writers to create without fear of reprisal.

Nossel had said in a statement that Rushdie is both an author of unmatched distinction, and a relentless champion for free expression, using his voice to support imperilled writers and intellectuals across the globe over decades. We are shaken to the core by this grievous assault, a reminder to us all that our rights and freedoms are more precarious than we wish to acknowledge.

The outpouring of support for Salman from leaders, friends, admirers and readers worldwide has the potential to fuel a watershed moment for the freedom to write, a cause that is synonymous with Salman’s life and work. We are gathering as friends, associates and admirers to amplify Salman’s words and convey our warm wishes, but also to rise in defence of principles that will not be extinguished by violence.

Markus Dohle, CEO of Penguin Random House, said in a statement that Rushdie’s voice and literary works are inextricably tied to the advancement of freedom of expression, and the attack on him is a horrifying and unconscionable act of violence.

As publishers, we have a collective responsibility to support writers whose books and ideas ensure an open and ever-evolving society. It is our honour to publish Salman’s prolific works and to stand with him and the entire literary community as we remind the world of the power and necessity of the written word.