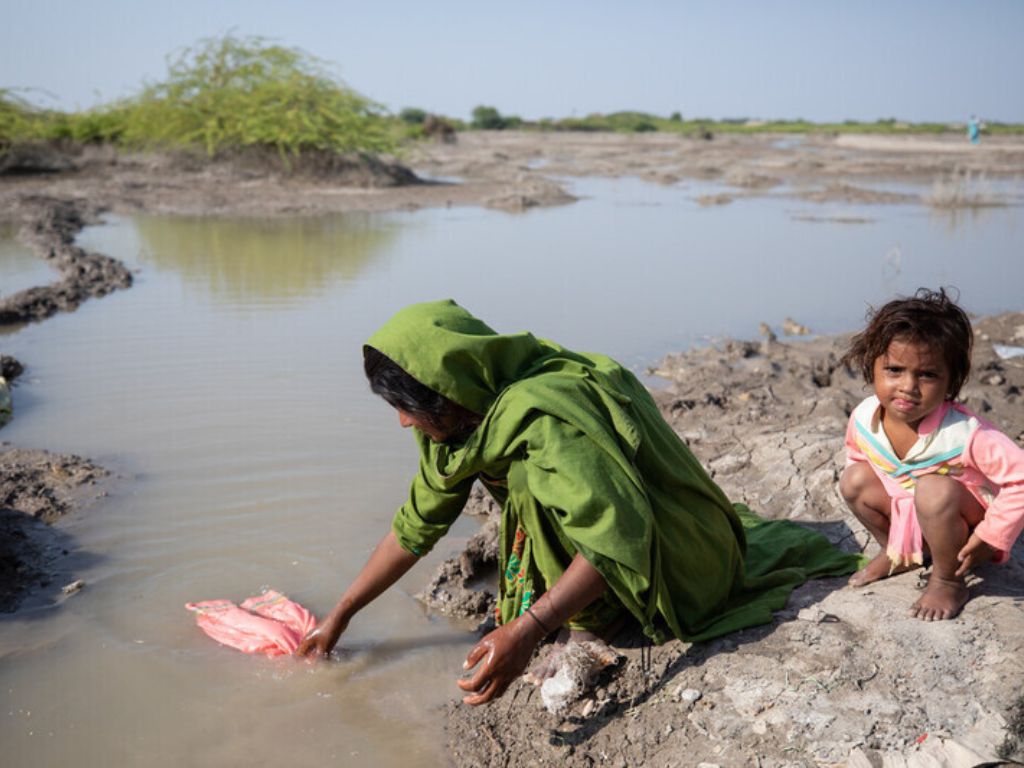 For 45-year-old Rasheeda, a resident from Dadu district of Sindh province in Pakistan, the country’s recent floods have not only taken everything that man needs for a minimal survival but also posed a serious danger to her health in the form of urinary tract infection (UTI).

The condition is turning worse and the doctor has advised her to remove her uterus as the infection is spreading to other parts of the body. But Rasheeda is in no position to undergo such a surgery.

There are several women like her who are facing such a gendered threat after the deadly floods devastated the South Asian nation, killing more than 1,700 people, displacing eight million, and causing the economy an estimated loss of $3 billion.

WaterAid, an international not-for-profit organisation that works on water, sanitation, and hygiene, said that while leaders from across the world are currently meeting at COP27 to discuss gendered impacts of climate change, women and girls in Pakistan are struggling with serious health-related complications such as UTI, reproductive issues, and others after the floods that submerged a third of the country earlier this year.

Stagnant water, unhygienic conditions, poor sanitation, and lack of access to medical facilities batter their health, with one woman with an underlying health condition advised by doctors to have a hysterectomy, and another fearing for the life of her unborn child, WaterAid said in a press release.

Representatives from the organisation visited flood-affected communities in Dadu and Badin districts of Sindh and saw women and girls there facing trauma and anxiety, with some even fearful of menstruating due to lack of privacy and sufficient access to clean menstrual products of clothes. It was also seen that people tore their ‘dupatta’ (scarves) and other clothing to manage periods.

Tahmina, a local nurse working with women and girls from camps in Dadu, told WaterAid that most of the women she meets complain of abdominal cramps, excessive bleeding, and unusual discharge.

She said she has witnessed symptoms associated with UTIs “significantly increase” and estimates that “70 per cent” of women she has seen are suffering from the condition. She held unhygienic conditions and contaminated water for the health issues the women and girls are facing.

“Unhygienic conditions, using of the same cloth for longer periods, holding urine for longer periods, using contaminated water for drinking and washing purposes and lack of handwashing are contributing a lot to this. Due to trauma and anxiety, women are in shock,” she told WaterAid.

“Moreover, miscarriages were at a peak during the initial days of the floods. I got to know one case of a stillbirth. I was told that the woman couldn’t get timely medical assistance during her labour pains and the child died before birth.”

Thirty-two-year-old Rubina was six months pregnant when she fled her village Bachal Laghari, Johi, in Dadu because of the floods. With her pregnancy about to complete its term, Rubina lives with her husband and four daughters in a makeshift camp, fearing the health of her newborn and other children.

“Living in a tent is not a life that I saw for my child and I am not sure whether my child or I will be able to survive in such a critical situation,” she said, adding, “I am aware that the stagnant water will take more than three months to be absorbed by the soil, so I just get goose-bumps when I think of living here for the next four months. My family has lost everything, but we do not want to lose this baby.”

Rubina is one of the estimated 650,000 pregnant women in Pakistan’s flood-affected areas who urgently need maternal health services to ensure safe pregnancy and childbirth. More than eight million women living in the flood zone are believed to be of reproductive age.

WaterAid also spoke to Rashida, whose health has been threatened by infection in the uterus because of lack of hygiene. She was vulnerable to infection prior to the floods due to a prolapsed uterus. For the past three months, she has been wearing the same menstrual cloth, without soap and water to clean it, and it has caused her abdominal pains and the infection is getting worse.

“When I moved in here, there was no toilet or clean water and even now we are living without it. Therefore, I am forced to use my menstrual cloth without washing it with soap or washing powder but just with dirty flood water. I used to bury my cloth in the ground but now I wash my cloth in the dirty flood water so that it can be used again and again,” Rasheeda, a mother of seven, said, adding that the doctor asked her to remove her uterus before the infections spread to other parts of the body. But her family’s dire financial conditions do not allow her to go for such a procedure.

Rasheeda also said that the workload at the camps has also increased since they have to fetch water for drinking, cooking, and toilet and with her health conditions, it becomes difficult for her to do the household chores.

“I just lie all day on the bed and my daughter looks after me and other tasks as well,” she said.

Many of the women and girls WaterAid met fled their homes without any possessions and as a result, they had no choice but to use clothes to manage menstruation.

Forty-year-old Rabia said, “When I left my home, I could not take any extra clothes or pads to use during my period. I was just wearing a suit, and I tore my dupatta [scarf] when, after two days, I got my period. I had to wash it again and again but due to the rains it could not dry. Using the same wet cloth during those days was impacting my health. I got itching and pain in my lower body, which was consistent for so many days.”

Lack of privacy for managing menstruation is another serious challenge for the women and girls staying in the temporary camps. Nazia, 12, said her period started for the first time while she lived in a camp in Hayat Khaskheli village in Badin and it was an experience she would not like to remember.

“I am yet to forget how helpless and embarrassed I felt when I had my first period. There were strangers [men and women] as our neighbours in the camps. They were outside and I was not comfortable going out to wash my menstrual clothes, so I waited till dark. This was devastating.”

With gender being a key aspect on which COP27 has focused, WaterAid has called on the world leaders to channel more money towards water, sanitation, and hygiene projects so that women and girls, who are bearing the brunt of climate change, can better cope with its impacts.

“I challenge world leaders to listen to the words of these women and girls in Pakistan who are on the climate change front line and do all they can to help them and the millions more like them across the globe.

“If they fail to act, many more lives will be hanging in the balance. Clean water, sanitation and hygiene promotion are essential for women and girls to stay disease free, go to school, earn a living and be more self-reliant. They cannot wait any longer for world leaders to act – the time is now.”

Risk-modelling firm RMS has said that the 2022 floods in Pakistan were the tenth most-expensive climate disaster to have hit a nation over the last decade.