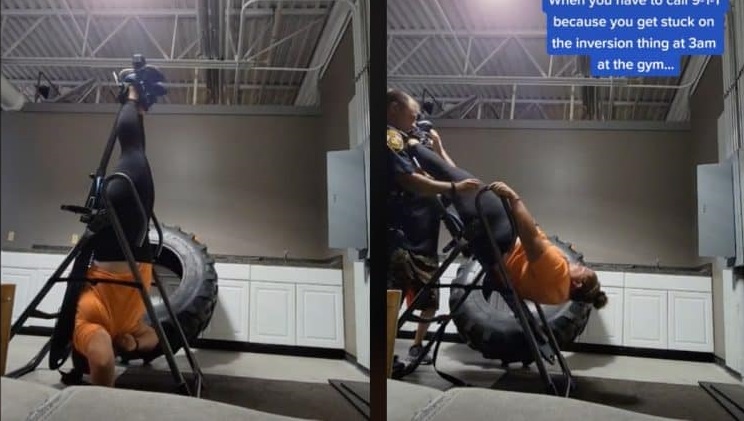 A woman from Ohio, in the US, is now trending on the internet after she had to make an embarrassing phone call to 911 for getting stuck upside-down, in exercise equipment while working out at 3 am.

She was rescued after she somehow managed to dial the emergency number using her smartwatch.

Christine Faulds was working out at the inversion table at the 24-hour Powerhouse Gym in Berea where the incident is supposed to have taken place.

She was filming herself while working out and moments later, she became stuck in the exercise equipment – her ankles were locked into the inversion table.

The table suspends the body upside down, helping to stretch the spine, which in turn provides relief from back pain.

Footage of the incident shows Christine trying her best to lift her lower body but to no avail. After many failed attempts, she finally called 911 and asked for help.

A few seconds into the video, she is heard talking to 911 about her predicament – “Hi, I couldn’t look up the non-emergency number. There’s only one other person at the gym and I got stuck in this you know that backboard thing that flips back?”

She adds, “I wish there were more people in the gym right now, but I’m stuck in this reverse back decompression thing. I don’t know, I just can’t get anyone’s attention at the gym. I’m just stuck upside down and I cannot get myself right side up.”

The only person reported to be in the gym at that time was a person called Jason but he couldn’t help her as he was in the other room doing weights, and couldn’t hear her due to the loud music.

The video was posted on Twitter with the caption, “’This is so embarrassing’ — A woman went viral after getting stuck upside down on an exercise machine and calling 911 for help.”

A user commented, “I’m glad she’s ok and was a good sport about this, but in all seriousness, that apparatus should only be used with a spotter for safety.”

The entire ordeal lasted for around 12 minutes, and Christine stated that she experienced a headache afterward, and also felt a little bit fuzzy. However, she wasn’t harmed.

Inversion tables are used for inversion therapy, also called spinal traction, to help those with chronic lower back pain. It is known to provide relief by taking pressure off the spine.