We struggled, but we did it together: Hardik Pandya to Virat Kohli after thrilling win over Pakistan 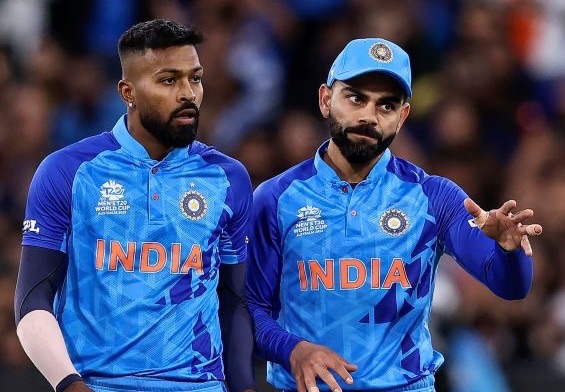 An explosive half-century by star batter Virat Kohli and a century stand with Hardik Pandya helped India defeat Pakistan by four wickets in their Group 2, Super 12 match of the ongoing ICC T20 World Cup at the iconic Melbourne Cricket Ground (MCG) on Sunday.

“Yeah, the best part of today was that we struggled, but we did it together. This would not have been this special if we would have just walked, just cruised through hitting exceptional shots. It feels more special because we struggled. We were talking to each other about how difficult it was. Credit to Pakistan as well, they bowled really well. They were fantastic,” Hardik told Kohli in a video posted on the website of BCCI.

There were 31 needed from the last two overs and Kohli smashed Rauf for two massive sixes on the final two deliveries of the penultimate over to make the equation 16 from the final six balls.

“Those two shots played by Virat Kohli, just because I know how important those two shots were, if you had missed even shot, still they were running ahead with the game. I have hit a lot of sixes, but those two sixes were really really special. What it meant for both of us, we actually were so pumped. Those two shots, I told him that I have played so much cricket but I do not think anyone could have played those two shots except Mr. Kohli,” he added.

“Firstly we had a great partnership There was a lot of pressure when Hardik came to play, we were in a very difficult position. To be honest I was feeling a lot of pressure. I understand the pressure and magnitude of the game. But Hardik played fearlessly in that partnership. We looked to bat deep. He really kept me focused on that point. We just kept batting and I don’t even know when we stitch up 100 run partnership,” Virat Kohli told Hardik.

The all-rounder further stated that he was numb when he came to the ground. Pandya said: “I sensed a lot of pressure in our room, I could sense it. It was a big game, but for me, I do not know, for some odd reason, I was very numb today when I came to the ground. This is where I wanted to be and I am just happy to be here. The quality of relationship which I have in this group is something I cherish.”

“I would have taken a bullet for you at that point in time, but I would not have let you get out. My goal was simple, whatever I can do to make your life easier, I’ll do it. You have done it so many times and no one is better at handling pressure than you,” the all-rounder further added.

Put to bat first by India, Pakistan put up 159/8 in their 20 overs. Shan Masood (52) and Iftikhar Ahmed (51) scored solid half-centuries but Pakistan kept losing wickets consistently. A 76-run stand between Masood and Ahmed was crucial for Pakistan. Hardik Pandya (3/30) and Arshdeep (3/32) shined for India with the ball. Shami and Bhuvneshwar also got a wicket each.

Chasing 160, India was reduced to 31/4 in less than seven overs. From then on, Virat and Hardik started to rebuild, putting up a 113-run stand. Pandya was dismissed for 40 but Virat ended unbeaten to score 82 off 53 balls with six fours and four sixes to guide his team to a four-wicket win. Virat got the ‘Man of the Match’ for his knock.