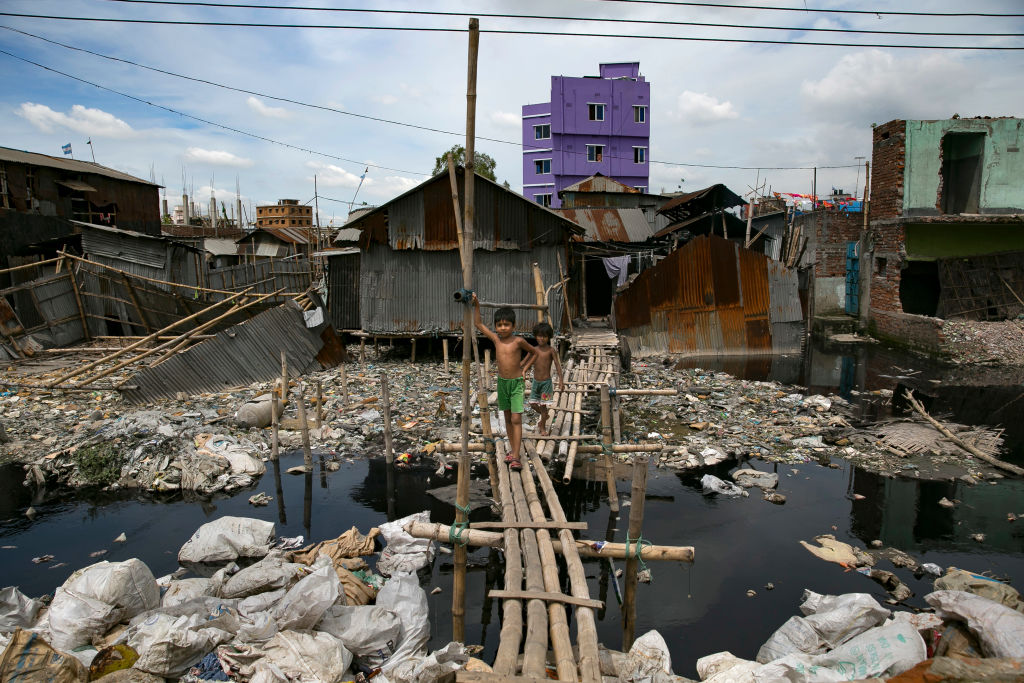 Children walk over a polluted canal that leads to the Buriganga river in Shyampur June 10, 2018 in Dhaka, Bangladesh. (Photo by Allison Joyce/Getty Images)

Water pollution threatens nearly all the globally agreed development goals to end environmental destruction, poverty and suffering by 2030, economists warned in a report on Tuesday, citing the largest-ever database on the world’s water quality.

The World Bank report warned of the ripple effects of water pollution on the health, economies, education and agriculture of rich and poor countries alike.

“This study was a huge wake-up call to us about the quality of water worldwide,” said Richard Damania, World Bank economist and one of the study’s authors.

“The world tends to focus on water quantity such as floods and droughts, but this report focuses on the more invisible threats – the effects of pollutants impacting global water quality,” Damania said.

The 193 United Nations member states agreed on Sept. 25, 2015 to a lofty 15-year agenda of 17 Sustainable Development Goals (SDGs), with 169 targets aimed at helping everyone live healthier, more prosperous lives on a cleaner planet.

SDG 6 refers to clean water and sanitation for all, but the U.N. World Water Development Report found about three out of 10 people – 2.1 billion – did not have access to safely managed drinking water at home in 2015.

In sub-Saharan Africa, coverage was only 25 percent.

“Chemical contamination such as arsenic in Bangladesh, mercury in Maputo and fluoride in parts of Kenya are major concerns,” said Neil Jeffery, the CEO of water rights group Water Sanitation for the Urban Poor (WSUP).

“Pollution affects countries both rich and poor. It is just the cocktails of chemicals that change,” Damania said. “Plastics and pharmaceutical contaminants are problems everywhere.”

“Information is the first step,” said Damania, in league with water rights groups.

By way of example, Jeffery cited that “informed consumers can make decisions to keep rubbish out of waterways.”

And they can pressure corporations and government “to take the challenge seriously,” said Javier Mateo-Sagasta, senior researcher at the Water Management Institute (WMI).

The report said that the scale of the problem meant there is ‘no silver bullet’ but Damania remains optimistic that “social movements, political and corporate will and new technologies” could still save the threatened resource.