“He (Raiji) passed away at 2.20 am in his sleep at his residence in Walkeshwar in South Mumbai due to old-age,” his son-in-law said.

He made his debut for a Cricket Club of India team that played Central Provinces and Berar in Nagpur in 1939.   His Mumbai debut happened in 1941 when the team played Western India under the leadership of Vijay Merchant.

Raiji, a chartered accountant, was 13 when India played its first Test match at the Bombay Gymkhana in South Mumbai.

“His warmth and passion for playing and watching Cricket was endearing,” Tendulkar wrote of his meeting with Raiji on Twitter following the announcement of the death.

I met Shri Vasant Raiji earlier this year to celebrate his 100th birthday. His warmth and passion for playing and watching Cricket was endearing.

His passing away saddens my heart. My condolences to his family & friends. pic.twitter.com/fi8dOP7EnI

According to Indian sports statistician Mohandas Menon, New Zealand’s Alan Burgess, who was 100 on May 1, is now the world’s oldest living first-class cricketer.

The cremation will take place at the Chandanwadi crematorium in South Mumbai on Saturday afternoon.

Raiji is survived by his wife and two daughters. 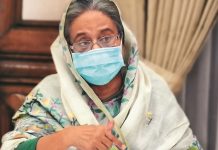