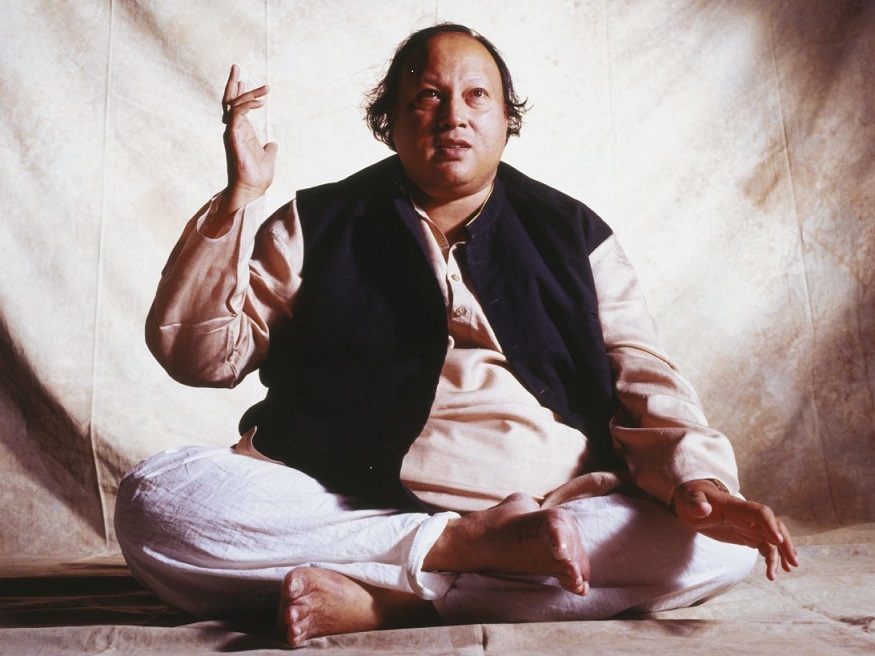 NUSRAT FATEH ALI KHAN REMEMBERED BY THE LEGEND WHO DISCOVERED HIM

Late great maestro Ustad Nusrat Fateh Ali Khan is regarded as the greatest qawwali artist of all time and one of the most important musical voices of the 20th century.

After an incredible career, the supremely gifted Sufi star passed away on August 16, 1997, aged just 48, and left a hole in the music industry that has yet to be filled.

Legendary British music pioneer Muhammad Ayyub MBE helped give him a global springboard through his path-breaking Oriental Star Agencies (OSA) record label and perhaps knew him better than most. He released almost 150 albums of the qawwali giant, along with organising live shows and connecting him to international organisations like Real World Records.

To mark the 25th death anniversary of the qawwali king, Eastern Eye got Ayyub to get us closer to him by recollecting his own incredible journey with a man who changed music forever. He also revealed unknown facts about Nusrat and the story behind an extraordinary record-brea­k­ing global music deal that almost happened.

How did you first encounter Nusrat Fateh Ali Khan?
My friend Haji Hidayat from London used to record artists from Pakistan. In 1977, he brought two 10” reels, which we heard in our office. My brothers Yunus and Farooq, me, and Sam Sagoo (Bally Sagoo’s father) were mesmerised. This was the first time we ever heard Ustad Nusrat Fateh Ali Khan’s voice. I said ‘wow, what an angelic voice’, and we thought it must be introduced to the whole world.

Tell us about your first Nusrat music release?
From that recording we heard in 1977, we rele­ased four cassettes, one hour each. The most important tracks on those were Haq Ali Ali and Jana Jogi De Naal, which became great hits immediately.

How did you feel about being able to release so many albums of his?
We, at OSA, feel very proud to have released almost 150 albums in various formats, like cassettes, vinyl, CDs, and DVDs. We recorded almost 30 of his concerts, which are now rare recordings of a master, which will entertain audiences for centuries to come.

Which among his music was closest to your heart?
I loved every track he sang, but in traditional qawwali I loved Haq Ali Ali. In contemporary recordings, the album Magic Touch produced by Bally Sagoo and, especially, the track Kinna Sohna.

What made him great?
He sang from his heart and could feel an audience’s pulse. He had command on va­­­rious ragas and used a variety on his re­­cordings. He was a master of rhythm and created tunes which are copied gl­o­b­ally even today. Even Ustad Rahat Fateh Ali Khan regularly performs his compositions.

What was Nusrat like as a live performer?
He was one of the greatest live performers of all time and would always have people completely engrossed at his concerts. He took people to great heights and made them feel close to God. His voice reached high notes, where no other singer could reach. There are so many unforgettable stories from his many concerts around the world, which left audiences mesmerised. I remember audiences in Tokyo saying they couldn’t understand the language, but whatever words he sang went straight to their hearts.

Tell us something about his first performance for international audiences at the Womad festival?
That was unforgettable indeed. He was the last on stage that weekend after everyone else had performed and started at 12 midnight. His performance was supposed to last 90 minutes, but audiences liked it so much that it carried on till 4.30am. Following that, he was booked across Europe, North America, and Asia, and for big global TV channels like BBC.

How did you feel organising live concerts with him?
I went with him to every concert OSA organised in the UK and enjoyed each one. Every time he sang a qawwali, there was a variation in his style. I felt honoured, elevated, and closer to Allah. I never tired of repeatedly listening to his qawwalis. Listening to him was a feeling of spiritual enlightenment for me and the audience. I felt completely involved and in sort of a trance.

What was Nusrat like away from music and work?
He was kind, humble, generous, always spoke softly, and ate very simple food. He loved his family, especially his daughter Nida, always phoning her and buying her gifts. He loved buying poetry books and records in diverse languages and genres, including western classical and contemporary music. He loved cricket and watched the Pakistani team live whenever possible. He did a lot of philanthropic work, including charity concerts, and supported many impoverished families in Pakistan.

Would you describe any special moment you shared with him?
Every moment I spent with him was special. I remember once he wanted to buy a Japanese doll when we were in Tokyo for a concert. We spent the whole day looking until we found one.

Tell us something not many people know about him?
His name was Pervez as a child, but a visiting holy man asked his father to change it to Nusrat. He said Pervez was a Persian ruler, and wouldn’t suit him as he would be singing in praise of Allah, the Prophet (PBUH), and Sufi saints. His father wanted him to be a doctor. Greats like Shiv Kumar Sharma, Ustad Zakir Hussain, and Hans Raj Hans liked watching his concerts. Even artistes like Madonna attended his concerts. He shared a close bond with great tabla maestro Ustad Allah Rakha. I remember Nusrat had performed at Rishi Kapoor’s wedding in 1980, in front of the whole Indian film industry. Lata Mangeshkar was out of town and expressed a desire to meet him. Yash Chopra arranged for Nusrat to deliver a private concert for her. These are some of the many things people may not know about him.

Tell us about the global record deal he was about to sign before he died?
Mambo Sharma, Rashid Din and myself, were invited in 1995 to New York Sony head office to discuss a deal with the top directors of Sony Music. They wanted to sign Nusrat Fateh Ali Khan for a vast sum. They asked him to lock himself in a New York recording studio and offered him any artist globally to record with. The multi-million-dollar deal would have been the biggest ever for any south Asian artist. But his health deteriorated soon after.

Tell us about that?
Nusrat was going to have a kidney transplant in America. He returned to Pakistan to meet family and friends before the operation. He then went to India to finish some Bollywood film music and fulfil a commitment, despite his failing health. He contracted Hepatitis B and C during dialysis. His health deteriorated, but he kept recording and performing concerts in India and Pakistan. Finally, he was travelling to USA for his operation. During a stopover in London, he was rushed from Heathrow Airport to Cromwell Hospital, London. A few days later, he sadly passed away at noon Saturday, August 16, 1997.

How do you remember him today?
I rate him as the greatest Pakistani singer, mu­sician, performer, and human being of our time. He ranks very high among the wo­r­ld singers of modern ti­m­es. He lived and lo­v­ed music. His music will remain a great source of inspiration for many generations to come. He will be remembered for centuries. He brought the world closer together through his music. He preached the Sufi message of peace, love, understanding, and brotherhood. He was a true cultural ambassador for Pakistan, Islam, and music. I miss him.