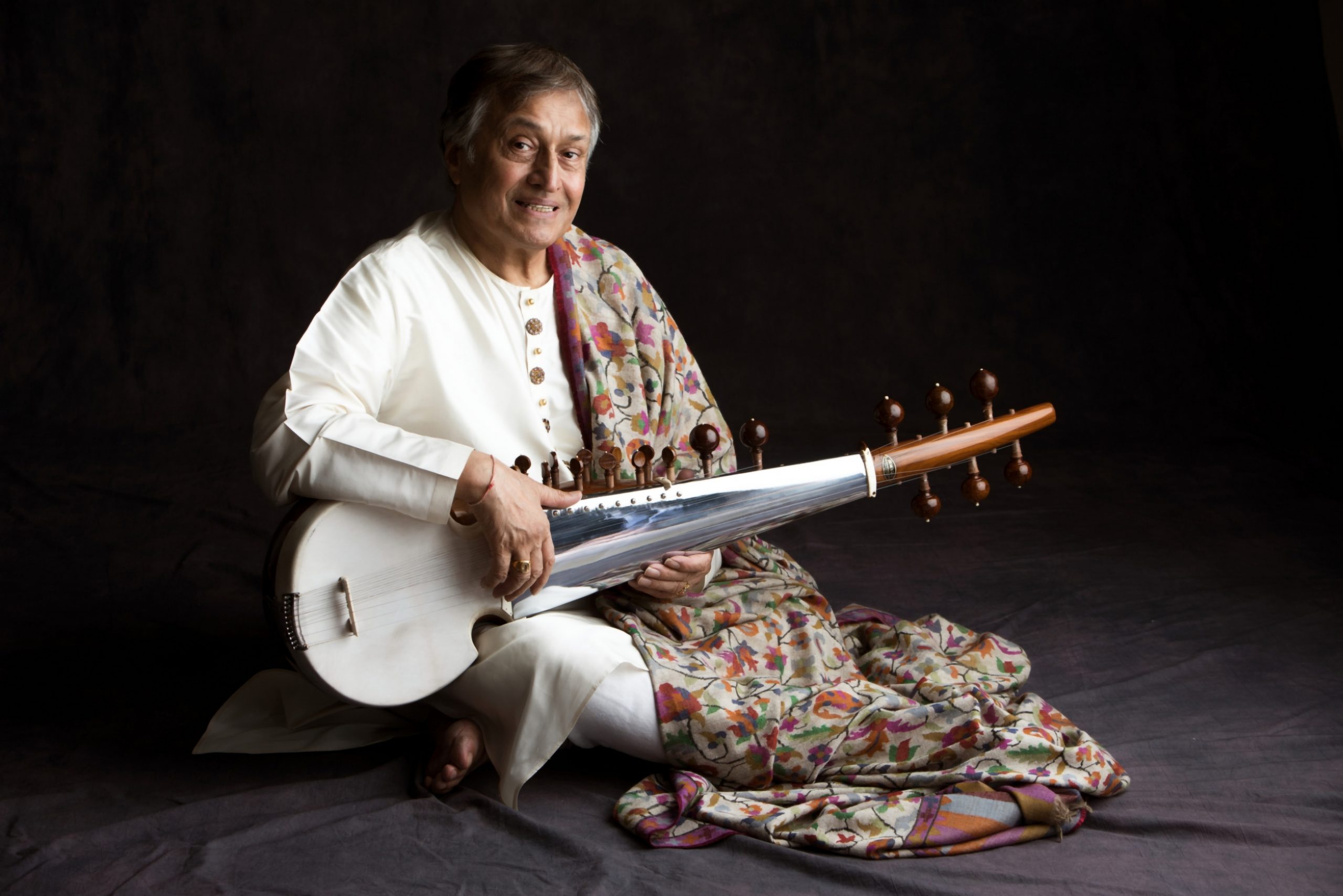 The BBC Proms is widely regarded as the greatest classical music festival in the world and a beautiful highlight from this year is a concert headlined by Ustad Amjad Ali Khan.
The Indian sarod maestro will deliver what promises to be a majestic performance at the Royal Albert Hall with his sons Amaan Ali Bangash and Ayaan Ali Bangash, who are acclaimed virtuosos, along with outstanding performers on the tabla and mridangam.

The August 21 concert continues an epic journey for the all-time great, which commenced with him being born into an esteemed musical family stretching back multiple generations and receiving rigorous training as a child, before taking to the stage internationally as a young prodigy in the 1960s.

Eastern Eye caught up with the sensational 76-year-old to discuss his deep connection to music, BBC Proms concert and what keeps him so grounded.

You’ve achieved so much in your life and are an all-time great. What keeps the passion and drive so strong?
The power of music. Music is a precious gift of God and has connected the world. Music does not belong to any religion. We all need music in our life.

But sir, you inspiringly seem to have more energy than people a third of your age. Where do you find all this amazing drive to keep powering on after many decades of global success?
Again, it’s music. You must have heard that music is now being used as a therapy. Music can cure a lot of ailments, problems, and diseases, so I think it is a precious gift of God. All the musicians of the world are like one family. We belong to one family and are committed to peace in the world. We want the world to be very peaceful, and there should not be any hatred towards each other. Education could not create compassion and kindness in human beings, with all due respect to education. But we need kind and compassionate people in the world. I’m very sad there are wars, conflicts, and problems in the world (so have to keep going).

You have delivered countless live performances across your esteemed career. How do you feel before going on stage today?
You know I feel every concert is like the first concert of my life. Wi­th every concert I feel like I’m appearing on the stage for the first time.

You have remained so humble despite being one of the world’s all-time greatest musicians. What has kept you so grounded?
Dear sir, I cannot manipulate through sound. Sound is so pure, music is so pure and so sacred. With all due respect to language, language creates barriers. So, there’s nothing to be arrogant about because arrogance is a disease. When whoever in whatever profession becomes arrogant and unkind, it’s a disease. I think the medical world should create a tablet to make people kind and compassionate. We have tablets for every disease, such as coughs, headaches, and everything, so it’s my humble appeal to the medical world that please, create a tablet which can make all humans kinder and more compassionate. We need that kind of medicine.

How much are you looking forward to performing in the Proms this year?
I think it’s a desire of every musician of the world to perform at the Royal Albert Hall and for the Proms. Our concert is on August 21. I’m playing with my sons Amaan Ali Bangash and Ayaan Ali Bangash. So, we are performing as a trio. This concert at Proms was supposed to happen in 2020, but due to this Covid pandemic, the entertainment world has suffered a lot and it was postponed.

You have such a huge repertoire of music. How do you decide what to perform ahead of a big performance like this year’s Proms?
We take these decisions maybe a few days or even a few hours before – what ragas to play. Any melody which has a discipline of ascending and descending, we call it a raga. And the most important thing in Indian classical music is the composition because composition is an identity of the performer. The improvisation goes away with the musician, but what we leave behind, like if you listen to Beethoven, Bach or Mozart, are the compositions.

You have created many iconic compositions, so have a lot to choose from…
Yes, I have created many compositions. I have composed for orchestras, like the Scottish Chamber Orchestra, which was their first sarod concerto. I have written a 45-minute piece that many orchestras of the world have played called Samaag­am, which means confluence of many cultures. I have collaborated with Mr Joe Walsh, the famous guitarist from legendary band The Eagles, and we made an album. Also, Sharon Isbin, the world-famo­us guitarist, and I also made an alb­um. There are many collaborations like th­is, which we are always open to.

How does it feel when you’re on stage with your sons?
This is ultimate joy and pleasure. I was always worried that I should not be too old to be on stage with them because I could not see my father as a young musician. He was very old when I was born. I’m the youngest child of my father. So, I prayed to God that I should have children early in my life so they can perform with me on stage. So, I’m grateful to God, that all three of us perform all over the world. It’s a great pleasure and joy. I just feel indebted to God almighty for that.

Whenever I’ve spoken to your sons, they’ve always told me about the many lessons they have learned from you. Have you learned anything from them?
It is always a continuing learning process. While teaching them I learn a lot also. You know the world is complaining about Covid. This pandemic had a negative side, but also a positive one. The positive is that my grandchildren, twin boys of Ayaan, started playing sarod because their schools were closed. They are now nine or 10 years old. So, Ayaan gave them a lot of time, and now all five of us play together.

What do you think makes the sarod such a special musical instrument?
You know our family gave sarod to the whole world. My forefathers came from Afghanistan. The ancient instrument rabab was modified to create a sarod. Sarod is a Persian word, which means music. Now there are sarod players all over the world because its tonal quality has become very popular. The sound has a lot of depth and appeal. So, I’m grateful to God that we have music and sarod in our lives. My grandchildren are practising hard and I’m looking forward to them perf­o­r­ming with all three of us in future, especially in London. Maybe for the Proms, next time, they can have all five of us.

You are one of the greatest in the world but what according to you is the secret of a good live performance?
You know the secret is commitment and dedication. Just to play music in tune is not enough and not everything. Music should be appealing and that is only possible with the blessings of God. There has to be spirituality involved.

Tell us about that spiritual element?
Sometimes you must have heard the expression, sacred music. So, purity, sacred music, spirituality, and feeling is a precious gift from God. This leads to commitment and dedication. I hope this legacy will continue, and every young member of our family will realise this and value this classical music and sarod. We are really looking forward to this Royal Albert Hall concert.

You’ve inspired so many and remain an inspiration, but what inspires you?
You see India has produced so many great musicians and great masters, whether vocalists or instrumentalists. All the contemporaries of my father inspired me. I mean thank God we have their recordings and can still hear their music. So, listening, admiring, and appreciating other great masters itself is a big task and big process. It’s really easy to criticise everybody, but we learn more by finding good points in every person.

Why should we come to your concert at the Proms this year?
Because it’s a combined effort by my sons Amaan and Ayaan, and me. All of us are solo musicians. Amaan, Ayaan and I are often invited for solo concerts. But this togetherness and how the three of us present our music and communicate through music are special. So, this is our humble effort to give our best. I would like to invite maximum people who love appealing music and this kind of Indian classical music. We are looking forward to having very discerning and appreciative audience in London.