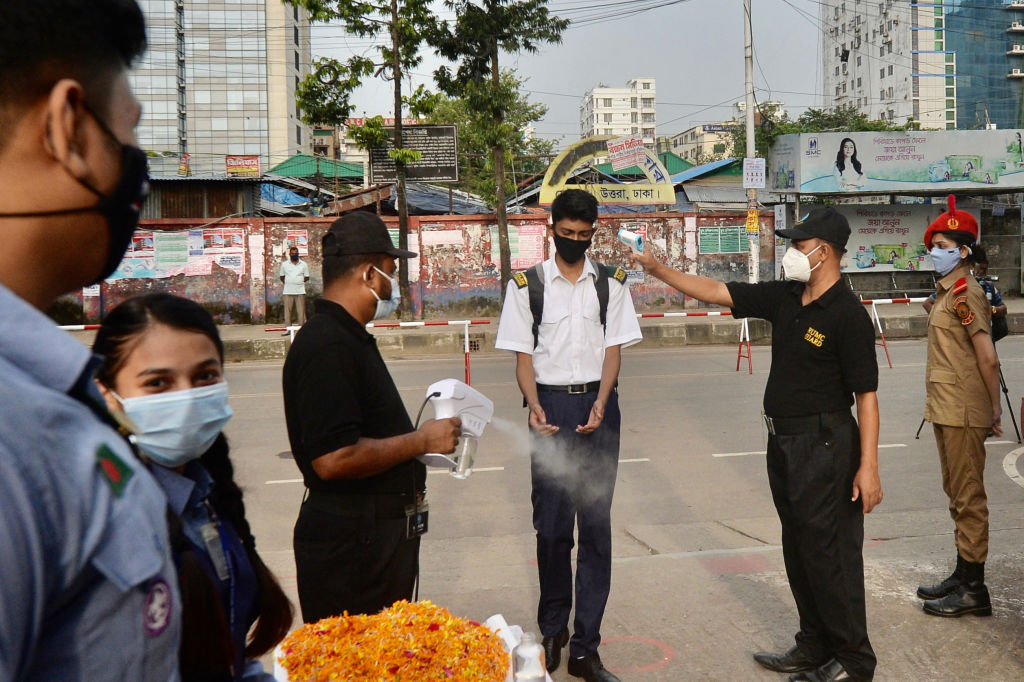 An official checks the body temperature of a student upon his arrival at the Rajuk Uttara Model College in Dhaka on September 12, 2021, as Bangladesh schools reopened after 18 months in one of the world’s longest shutdowns due to the Covid-19 coronavirus pandemic. (Photo by MUNIR UZ ZAMAN/AFP via Getty Images)

THE United States is shipping another 2.5 million Covid vaccine doses to hard-hit Bangladesh, a White House official said on Thursday (24), after the Biden administration announced a ramping up of global donations.

The latest shipment – 2,508,480 Pfizer doses – brings the total of US shots to the country above nine million.

Packing was underway and first deliveries, made through the World Health Organisation’s Covax programme would arrive Monday (27), the official said on the condition of anonymity.

“We are proud to be able to deliver these safe and effective vaccines to the people of Bangladesh,” said the official, adding that there were “no strings attached” to the donation.

“We are sharing these doses not to secure favours or extract concessions,” the official said.

According to an AFP database, only 9.3 per cent of Bangladesh’s population were fully vaccinated as of this week.

The country of about 170 million people, which neighbours India, has struggled to get the pandemic under control, imposing some of the world’s longest lockdowns.

Children only went back to school two weeks ago after being out of classrooms for 18 months – an example of the education gap that the United Nations children’s agency, UNICEF, recently warned is worsening inequity for millions of children across South Asia.

Like other rich countries, the United States has been accused of hoarding vaccines and prioritising booster shots instead of helping swaths of the world that remain largely unvaccinated.

On Wednesday (23), the United States authorised third doses of Pfizer vaccine for elderly and at-risk populations.

However, president Joe Biden has declared the United States the world’s vaccine “arsenal” in the war on Covid-19 and US donations total more than those from the rest of the world combined.

Biden told a Covid-19 summit of world leaders on Wednesday (23) that the United States is donating a “historic” extra 500 million vaccine doses, bringing the total US commitment worldwide to 1.1 billion.

The new tranche of half a billion vaccines will be from Pfizer and will go to low-income and middle-income countries as defined by Gavi, which co-leads Covax along with the World Health Organisation.

Biden was also challenging world leaders to vaccinate 70 per cent of every country by September 2022, the White House said in a statement.

A senior US administration official told reporters that Washington is “proving that you can take care of your own while helping others as well.”

US officials also deny they are competing in “vaccine diplomacy” with authoritarian China and Russia, which have used nationally produced vaccines to fill the supply vacuum in less-developed regions during the pandemic.

While the latest global coronavirus wave peaked in late August, the virus continues to spread rapidly, particularly in the United States, which is officially the worst-hit country.

Some 4.7 million people worldwide have died since the outbreak began in China in December 2019, according to an AFP tally from official sources.