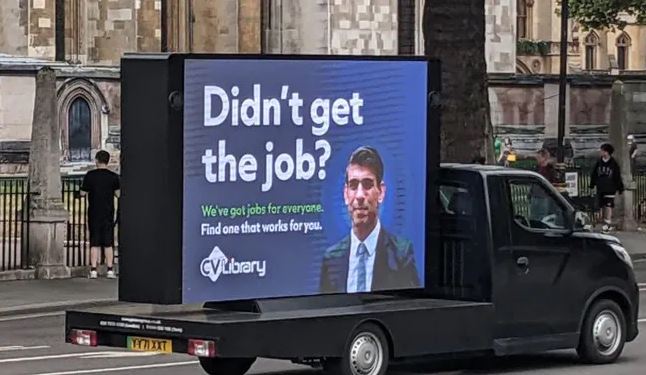 Job search company CV-Library displayed an ad with Sunak’s photo across the country after he was defeated on Monday (5). It showed a picture of Sunak alongside bold text that said “Didn’t get the job? We’ve got jobs for everyone. Find one that works for you.”

“A job site ad! Only Brits can do this!,” another wrote.

Another Twitter user recommended a raise for the creative mind behind the campaign.

However, some netizens have found reasons not to support the ad.

A Linkedin user wrote, “News aside, am I the only one that thinks that this “novel” way of digital advertising is horrible and extremely not eco-conscious? To have a minivan tour the streets with a screen seems like an irresponsible waste of petrol, contributing to traffic jams, not to mention the contamination it causes.”

Another user said: “Disgraceful! Regardless of who the photo is of, whether it’s Rishi, Liz, Boris, Tony, Margaret et al; If your child didn’t get the job they wanted, do we laugh? If they were in the public eye I suppose it’s ok? If he / she had a visible disability, identify as someone other than he or she, would you show their face in the ad with the same comment? I just don’t get it!!! Crazy world #bekind My comment is nothing in relation to politics.”

Earlier, Sunak was trolled for spelling the word “campaign” incorrectly in his banner exhibited at the time of his first television debate.

CV-Library also took a jibe at former Prime Minister Boris Johnson.With a back-facing picture of Johnson, they wrote, “There’s something exciting about a fresh start and a new beginning! There are exciting opportunities waiting for you whenever you’re ready to start your search.”

Truss took over as Britain’s prime minister on Tuesday (7), vowing immediate action to tackle one of the most daunting set of challenges for an incoming leader in post-War history led by soaring energy bills, looming recession and industrial strife.