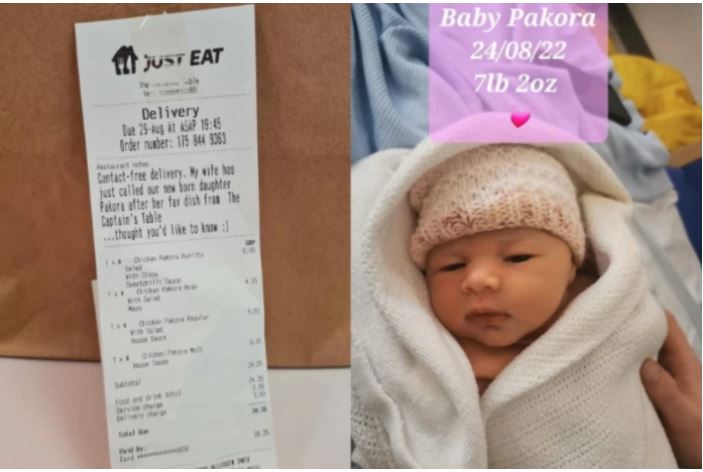 How often have you heard that a person has named their child after a famous person or a place? We’re sure, quite many times!

But, how often have you heard that parents have named their kid after a dish or food item they liked? It is quite amusing, right? Well, the cherry on the cake is that the name of a baby in the UK has been kept after an Indian dish!

In case you’re wondering what dish it is, it’s nothing but ‘Pakora’. The same ‘Pakora’ we enjoy with tea during monsoons!

The restaurant shared the photo of the newborn and wrote, “Now this is a first…welcome to the world Pakora! We can’t wait to meet you! xx”

The restaurant also shared a photo of a bill receipt that had the names of some of the dishes that have ‘pakora’ in them! Check it out:

Many netizens took to the post’s comment section and extended warm congratulations while some even got involved in fun banter online and started writing funny comments. A user wrote, “This is my two teens – Chicken and tikka”.

Another user wrote, “My favourite things to eat during my two pregnancies were Banana Popsicles and Watermelon. Thank God I used the sense I was born with and didn’t name my kids after them”.

Another one shared a photo of his child and wrote, “This is my kid, his name is chicken ball”.