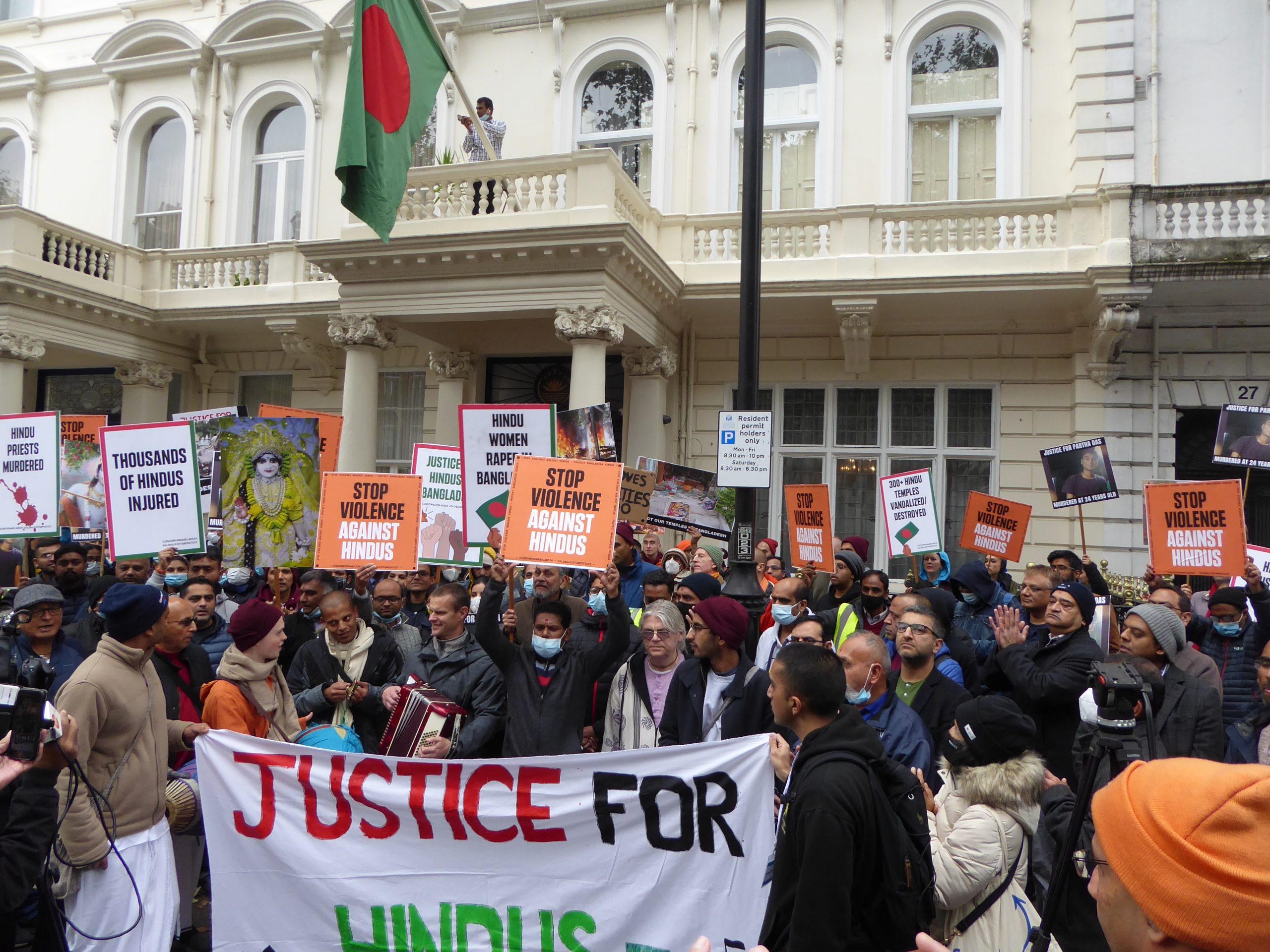 HINDU organisations in the UK appealed to prime minister Boris Johnson, home secretary Priti Patel and foreign secretary Liz Truss as they sought justice for victims of the recent violence against the minority Hindu community in Bangladesh.

The International Society of Krishna Consciousness (ISKCON) joined the Bengali Hindu Adarsha Sangha (BHAS) UK, Hindu Council UK and Insight UK for a peaceful protest outside the Bangladesh high commission in London and also in Birmingham and Edinburgh on Saturday (23). They said the protest was organised to raise awareness about the violent attacks against Hindus in Bangladesh during Durga Puja and Navratri earlier this month.

In London, the groups handed over a letter to Bangladesh’s high commissioner to the UK, Saida Muna Tasneem.

Similar letters are now being addressed to Johnson and senior UK cabinet ministers, including Patel and Truss, seeking their “intervention” with Bangladesh to take “appropriate measures” to protect Hindu minorities in the country and ensure their human rights.

“The UK Hindu community are saddened and appalled by recent events in Bangladesh, where radical extremists targeted and attacked a number of Hindu temples during the holy festival of Navratri, where countless congregation members were injured, two killed and numerous deities destroyed,” said Praghosa Das, UK chairman for ISKCON.

“There has been little to no media attention highlighting these horrendous acts of depravity. We implore the UK government to stand with its Hindu community in the UK and condemn these acts of violence and seek reassurance from the Bangladeshi high commission that action will be taken against those responsible,” he said.

As of October 20, 315 Hindu temples in Bangladesh were vandalised and nearly 1,500 Hindu homes and businesses ransacked, according to the groups.

“Hindus of all generations in the UK have expressed their empathy and deep compassion to the deceased and oppressed. The protest march resonates and corroborates that view and acts as a strong warning to Bangladesh authority,” BHAS UK said in a statement.

They appealed to the Bangladesh government to ensure “long-term protection of Hindus”, upholding human rights, punishing those responsible for the violence, repairing vandalised temples and restoring the shops and houses of Hindus which were looted and burnt.

Attacks on Hindu temples intensified in Bangladesh since October 13 after an alleged blasphemous post surfaced on social media during the Durga Puja celebrations. On the night of October 17, a mob damaged 66 houses and set on fire at least 20 homes of Hindus in Bangladesh.

Last weekend, tens of thousands of people from minority faiths rallied in cities across Bangladesh in protest against the deadly attacks on Hindu temples and homes.

Demonstrations were held on Saturday (23) in more than 60 places across the country, including the capital Dhaka, as protesters vented anger over anti-Hindu riots that left seven people dead.

“The law-enforcing agencies and civil administration have utterly failed to protect the minority people, especially the Hindu people,” said Rana Dasgupta, a leader of the Bangladesh Hindu-Buddhist Christian Unity Council, which organised the rallies.

Dasgupta said the biggest protests were held in Bangladesh’s second-largest city of Chittagong where at least 15,000 people joined in.

Another big rally took place in the Shahbagh neighbourhood of central Dhaka where several thousand gathered.

“The aim of these ghastly attacks was to drive away minorities from their homes as was done in the past,” Dasgupta said.

He said the protesters had submitted 11 demands to authorities including the setting up of a judicial commission to investigate the attacks.

The anti-Hindu riots spread to many parts of the country after footage emerged of a Qu’ran being placed on the knee of a Hindu god during celebrations for the Hindu festival Durga Puja.

Hindus make up about 10 per cent of Bangladesh’s population. But the minority community has often fallen victim to communal violence in the country of 169 million.

Bangladesh police have said they arrested about 500 suspects in connection with attacks on Hindu temples and other properties.

They include a Muslim who allegedly placed the Koran on the knee of the Hindu idol.

Authorities said they have deployed extra security including paramilitary border guards to control any further unrest.

High-speed mobile internet services were shut down last week in an apparent bid to prevent the violence from spreading.