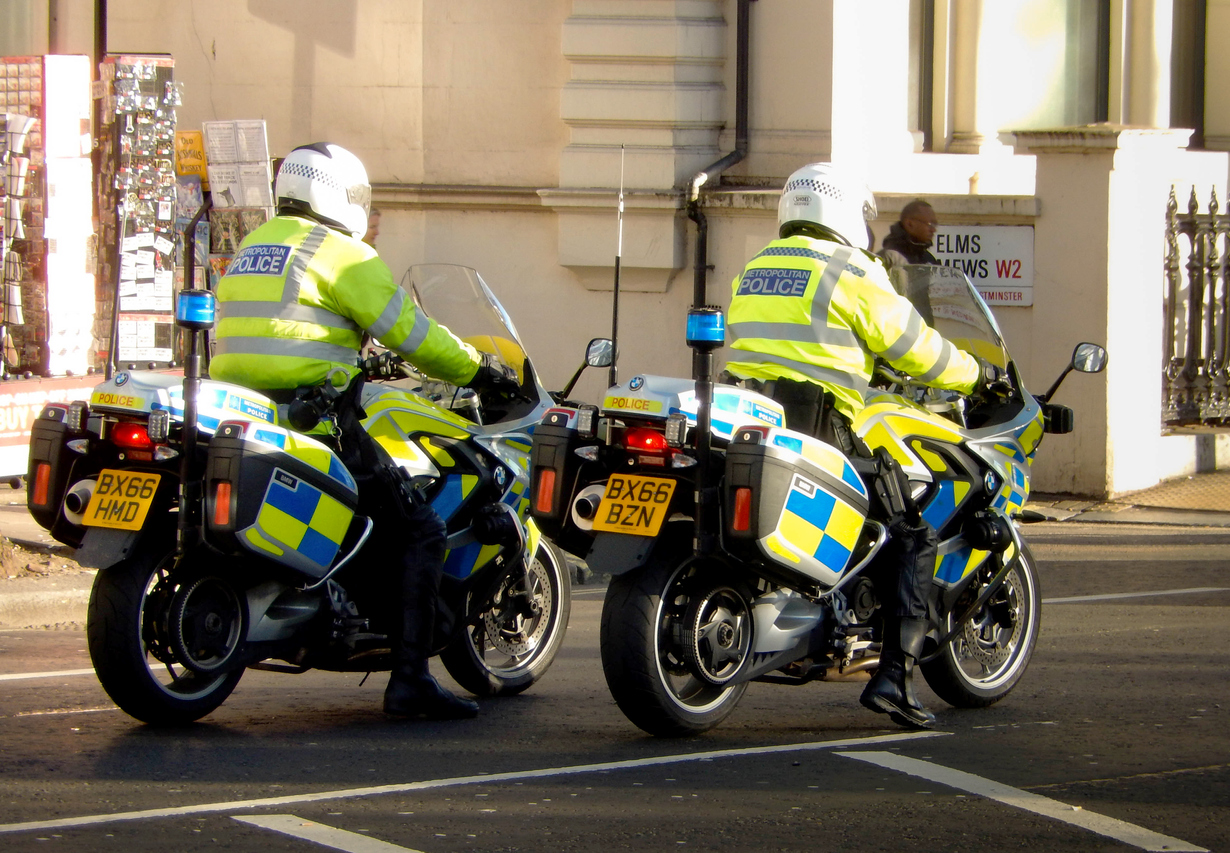 London, England – February 2018: Pair of police officers on motorcycles stopped on a street in central London

Sarah Everard’s killer Wayne Couzens’ colleagues in the Metropolitan Police were jailed for sharing misogynistic and racist messages on WhatsApp, according to reports.

They were members of a chat called “Bottle and Stoppers” on the encrypted platform with Couzens.

The court heard that the pair shared racist opinions with the group in 2019. They also talked about tasering children and persons with disabilities and made jokes about raping a female colleague.

The officers were bailed by the judge following a High Court appeal into their sentence, reports added.

In March 2021, Couzens, then a serving Met officer, kidnapped, raped, and strangled Everard, a 33-year-old marketing professional. The offensive messages shared among the officers were discovered following the tragic incident.

There were seven new Met Police officers as members in the group. In one of the chats, Cobban joked about sexually abusing domestic violence survivors.

In an exchange Borders wrote: “I can’t wait to get on guns so I can shoot some c— in the face!”. Responding to it Cobban said he wanted to taser a cat and a dog to see which reacts better and same with children.

Borders wanted to add ‘downys’ in the list, a term the prosecution said referred to people with Down’s syndrome

They referred Feltham, in west London, as “filthy” and Hounslow, also in West London, as a “Somali s—hole”. On April 25 2019, Borders also made derogatory comments about a female colleague.

According to the judge, the defendants embodied the complete spectrum of prejudicial ideas, including racism, misogyny, ableism, and homophobia.

“There was no intention on the part of the defendants to cause any harm to the persons to whom these messages relate or the minor groups of society who are undoubtedly affected by these messages,” she was quoted as saying by media outlets.

“The persons to whom these messages relate will undoubtedly have been caused great distress by knowing police officers find it funny to joke about them in such a deeply offensive manner.”

The judge went on to say that the duo made comments explicitly directed at or about people or groups that they had sworn an oath to protect as police officers.

While defending Cobban and Borders, Nicholas Yeo said that they were unaware of Couzens’ future intentions.

The Met said that they would proceed with the internal misconduct proceedings against the officers without delay.

Met Police Commander Jon Savell said: “The behaviour of these officers is despicable and I condemn them for sending such grossly offensive and repulsive messages. It is staggering that they regard this language as defensible.I am deeply sorry these officers have let down the public, and their Met colleagues.”