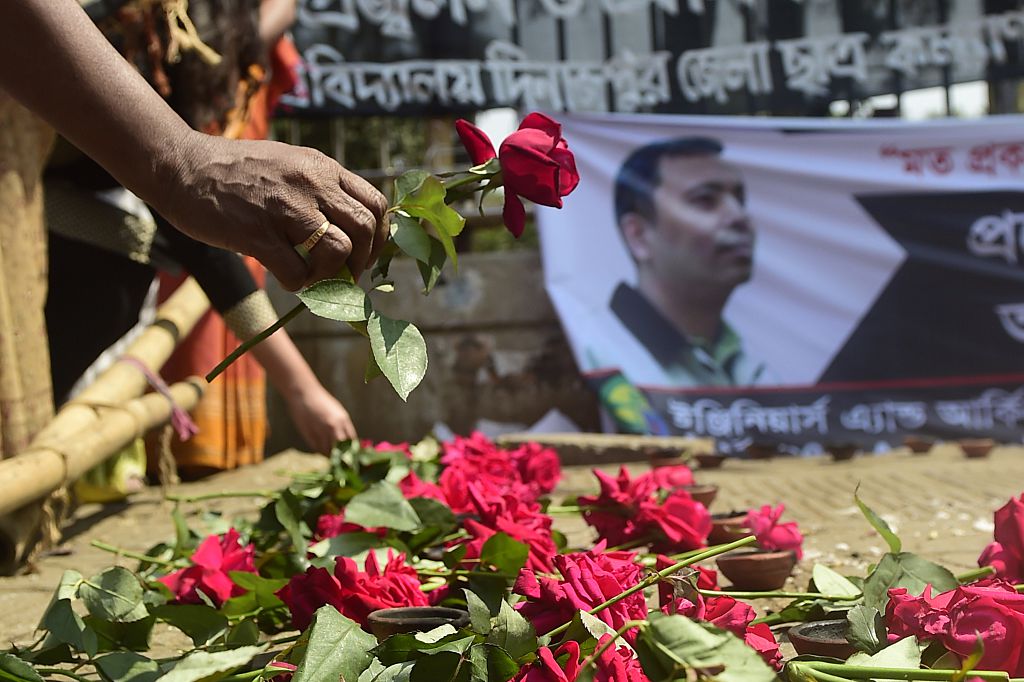 Two Islamist militants, who were sentenced to death for killing prominent Bangladeshi-American secular blogger Avijit Roy and his publisher, escaped dramatically from the premises of a crowded court in Dhaka on Sunday with the help of unidentified bikers who sprayed some chemicals on police and created a smoke screen before whisking away the convicts.

Hours after the incident, home minister Asaduzzaman Khan Kamal told reporters that a nationwide alert has been issued to recapture them and an investigation launched to ascertain how the event took place.

“We have launched a massive manhunt to recapture them and their helpers,” a police spokesman told newsmen at the scene.

He said Moinul Hasan Shamim alias Samir alias Imran and Abu Siddiq Sohel — both of whom were operatives of the outlawed terrorist group Ansarullah Bangla Team (ABT) — were brought to the court for indictment hearing in a different case when some unidentified motorcycle-borne men whisked them away while they were being escorted to transition prison room.

Police said the two ABT operatives were sentenced to death last year for killing 42-year-old Bangladesh-born US secular blogger Roy and his publisher Faisal Arefin Dipan.

According to police and eyewitnesses, the convicts fled the court premises on motorbikes as their accomplices sprayed some chemicals on policemen escorting them and created a smoke screen.

The eyewitnesses said the spray temporarily blinded only two policemen, suggesting that the convicts in the high-profile murder cases were being treated just like any other ordinary prisoners.

“The prisoners were just handcuffed, their legs were not shackled, a usual protective measure for dangerous criminals or militants,” a court official said.

CCTV footage aired by TV channels showed two bikers wearing helmets carrying the two militants through a narrow road in front of the Dhaka Metropolitan Judges Court complex, while a plainclothesman was chasing them.

Roy, an outspoken critic of religious fundamentalism, was hacked to death with machetes by ABT militants just after he left a book fair at Dhaka University on February 26, 2015. His wife Rafida Ahmed was also injured in the attack. The terrorist group also hacked to death his publisher Dipan in November of the same year at his office in Dhaka’s Shahbagh area.

Bangladesh witnessed an alarming rise in militant activities in 2015 when four “atheist” bloggers were murdered with authorities attributing the attacks to homegrown terrorists while Islamic State at that time had claimed responsibility for three attacks.

A 2016 cafe attack was the worst of the militant assaults when 22 people, including 17 foreigners, were killed, sparking a global uproar while a court subsequently sentenced seven of the eight suspects to death.

But it prompted the South Asian country with a Muslim majority population to virtually declare a total war against Islamists engaging Army, paramilitary and elite police units that saw a series of countrywide raids on militant hideouts and deaths of dozens of extremists.