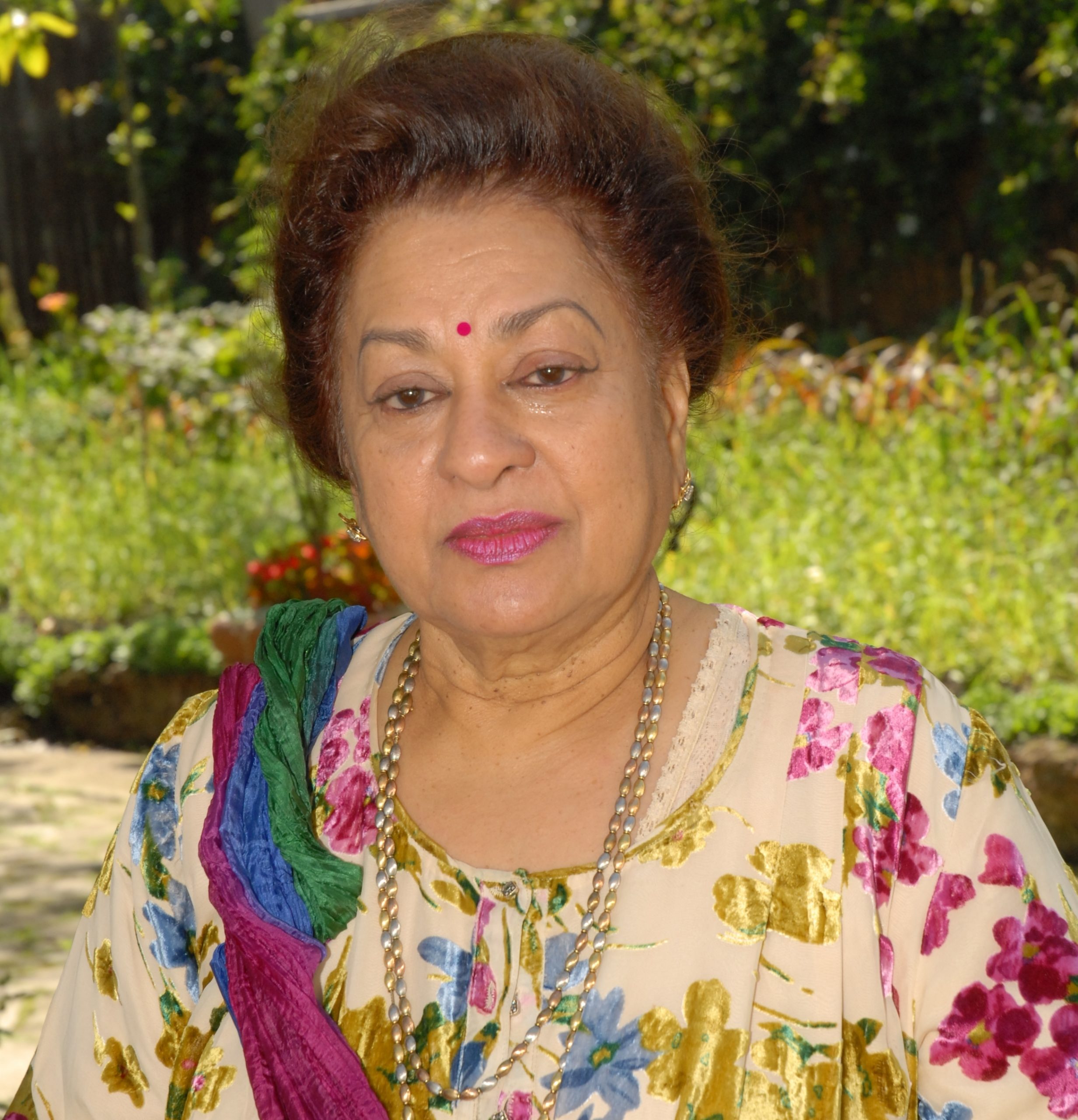 LADY ARUNA PAUL, who died suddenly at her home in London last Tuesday (3) at the age of 86, was married to the industrialist Lord Swraj Paul for over 65 years.

After her passing, Lord Paul, who is 91 and the founder and chairman of the Caparo Group, told Eastern Eye of his first meeting with her at a friend’s house in 1956 in the West Bengal capital city: “She was the most beautiful girl in Calcutta.”

Lady Paul, much loved by all who knew her, is survived by her husband and three children – twin sons Akash and Ambar, and daughter Anjli.

She was predeceased by two of her children – a daughter, Ambika, in 1968 at the age of four, and her youngest son, Angad, who died in tragic circumstances on November 8, 2015, at the age of 45.

Last Sunday (8), family and friends called on Lord Paul at the Zoological Society of London to remember “Aruna” in “celebration of her life”.

Afterwards, Anjli spoke to Eastern Eye about her mother. “On that day (Tuesday), she went to get her hair and nails done. When she came home, she literally got changed and then passed away.

“Everybody was saying how much they are going to miss her. And everybody’s got an endearing story to tell. One of the comments I got was it didn’t matter who you were, whether you were a lowly person or the prime minister of England, she would treat you in the same way. Which I think is really lovely.”

Lord Paul said Aruna “had always been very supportive”, a sentiment echoed by his daughter.

Anjli said: “My opinion is he was more dependent on her. She was dependent on him for the obvious things like finance and running life at a sort of a practical level. But I think emotionally he was probably more dependent on her than she was on him. He was in the limelight but he wouldn’t have had the success he’s had without her.”

She confirmed her mother was an avid reader. “She read Eastern Eye from front to back. She loved autobiographies and biographies as well. She was very interested in people in general. Funnily enough, a lot of people kept saying that ‘she was always interested in us and what we were doing and what we weren’t doing’. She found everyone very interesting.”

Aruna Vij was born in Calcutta on March 22, 1936, into a wealthy Hindu Punjabi family. She was educated at Loreto House, a prestigious Catholic school in the city, and studied teacher’s training at the associated Loreto College.

Swraj Paul, who was also born into a Hindu Punjabi family in Jalhandhar in the Punjab on February 18, 1931, arrived in Calcutta in the 1950s after studying at the Massachusetts Institute of Technology in America, and joined the family’s business in steel.

The city in the 1950s was an elegant place, still under the influence of British culture. It was the time of legendary heartthrobs Uttam Kumar and Suchitra Sen in films. At parties, men would come in black tie and the big-name hostesses “would wear long gloves before shaking hands”, Lord Paul would recall later.

The young Aruna Vij was beginning to turn heads. According to Anjli, “she was meant to be one of the most beautiful women in Calcutta”. In a culture where it was quite the done thing to stare, “she would tell us the traffic would stop when she walked out on the road.”

Lord Paul would later joke that Aruna, who was engaged to someone else at the time, was the target of his first takeover bid. He said that “within a week of meeting her, we were married”.

This story seems essentially true, though Lady Paul corrected some details when she spoke to Eastern Eye some years ago.

“Two days we were out of town and Sunday we got married,” she remembered. When she met Swraj, “I was already engaged. When I got married, he (her former fiancé) wept on Swraj’s shoulders for days afterwards,” added an amused Lady Paul. Anjli said the dumped former fiancé “was devastated”.

Ambar, Akash and Anjli were all born in Calcutta, and so was Ambika, who was diagnosed with leukaemia in 1966 at the age of two.

Getting foreign exchange for treatment in London in those days was almost impossible, but Lord Paul was grateful to Indira Gandhi, the new Indian prime minister, for her intervention. After six months, he was joined by his family in the UK. When Ambika was receiving treatment, she loved being taken to London Zoo by her father. Thus began his long association with the Zoo.

Ambika died in London, aged four, in 1968. A traumatised Lord Paul decided not to return to India but settle in London, and in time establish a steel business, Caparo, in the UK. He and Aruna began a tradition of holding a tea party at London Zoo in Ambika’s memory. He rescued the Zoo with a £ 1 million donation when it was facing bankruptcy. He has given more help in recent years.

In 1996, Aruna Paul became Lady Paul after her husband was given a peerage by John Major and took the title, Baron Paul, of Marylebone, in the City of Westminster. To friends, she remained Aruna.

In 2002, Lord Paul named a baby hippopotamus enclosure at the Zoo after Aruna, who was amused: “Other people name roses after their wives but you have chosen hippos.”

“Pygmy hippos are much rarer,” her husband countered.

She took a little persuading to venture out of the family apartment in London when her husband bought The Grange, a 250-acre country estate in Buckinghamshire, in 2007.

Anjli said: “She much preferred town. I think she was very comfortable in town. Of course, when she was more fit, she enjoyed The Grange and thought it was beautiful. When she became a little less mobile, she obviously found it very hard to make the journey. She loved being in London and being where we were.”

Her last trip to Calcutta, now Kolkata, was in April 2013, when she laid the foundation stone of a new wing at Loreto College which was financed by her husband. It was called the “Mary Ward, Lady Aruna Paul Wing”.

Lord Paul returned four years later to inaugurate the now functioning wing but this time his wife was not well enough to travel with him.

One of Lady Paul’s passions was reading detective stories. Author Glen Peters had introduced Joan D’Silva, an attractive Anglo-Indian widow, as a sort of Indian Miss Marple, in his debut novel set in Calcutta – Mrs D’Silva’s Detective Instincts and the Shaitan of Calcutta.

At Asia House in London in July 2013, Peters launched the sequel in which Mrs D’Silva solves a new murder mystery – Lucknow Ransom. Among his fans was Lady Paul, who attended the book launch and bought a copy. Peters remembered Lady Paul coming to the event: “She was a wonderful lady.”

The Pauls were reminded of their early blissful years in Calcutta when the “yesteryear” Hindi actress Kamini Kaushal visited London in 2014. On learning of her presence, Lord Paul summed up: “She was the Aishwarya Rai of her day.”

He immediately called up the vastly more knowledgeable Aruna and discussed Kaushal’s films which had been part of their growing up in Calcutta.

Tragedy followed in 2015 with the death of Angad.

Anjli said: “It hit them very hard. He was the apple of their eyes.”

When the West Bengal chief minister Mamata Banerjee came to UK in July 2015, she heard Lady Paul was unwell and insisted on dropping round to have tea at the Paul apartment in London.

The following year the Pauls were touched and thrilled to get a card signed by the Queen to mark their 60 years of marriage: “I am pleased to know that you are celebrating your diamond wedding anniversary on 1st December, 2016. I send my congratulations and best wishes to you on such a special occasion.”

In 2020, the pandemic forced them to postpone their tea party, now held to remember Ambika as well as Angad: “This year for the first time (in 25 years), we have to postpone the party as we are all still in lockdown.”

Anjli said her mother’s funeral was set for noon on Wednesday (11) at Golders Green cemetery in London.