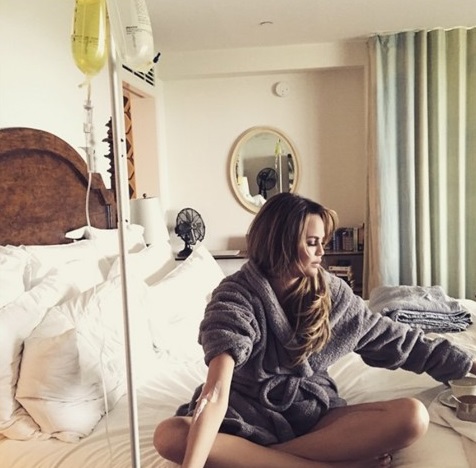 Doctors have warned that trendy vitamin IV drips do not work and may be dangerous. In the past few years, celebrities such as Miley Cyrus, Rihanna, and Chrissy Teigen have all posted on social media, pictures of themselves undergoing the therapy – triggering an increase in its popularity with clinics charging up to £2,000 for this therapy.

High street clinics that supposedly offer vitamin drips promote several health and lifestyle benefits of this therapy which involves a bag of fluid that contains a cocktail of vitamins and minerals that are slowly fed into the bloodstream through a needle and tube into the arm – almost the same way drip is administered in hospitals.

Depending on which infusion or flavour of drip bag a person chooses, the advertised benefits include boosting immunity, improved digestion, enhancing the health of the hair and skin, or getting rid of hangovers.

Dr István has warned that any overdose of vitamins can possibly weaken bones and even cause painful kidney stones, the Daily Mail reports.

He also dismisses claims these IV infusions can ease long Covid, warning that there will be no improvement in the condition with this so-called therapy.

Dr István, who is also director of internal medicine and oncology at the Hungarian university, is reported to have said, ‘Unproven [therapies], such intravenous vitamin drips, are [having] their heyday.

‘This is, in part, the result of overwhelmed healthcare systems and patients taking their health into their own hands.

‘People who suffer from long Covid, athletes who expect to see improved performance and faster recovery, or anyone looking to feel more energized or fit visit these places regularly.

‘Very few are aware of the risks involved though.’

The drips often contain vitamins A, D, and E which are known to support vision, bone health, and immune function.

However, according to Dr István, opting for these drips can be ‘really harmful’ especially if they are taken in very large amounts, as it takes the body a long time to break down these vitamins.

For example, choosing a one-off high dose of vitamin D, which is vital for bone health can trigger a loss of bone density. Besides, it will wear off within months.

Studies suggest this is because vitamin D supplementation increases the production of osteoclasts, the cells that break down bone tissue.

Meanwhile, too much vitamin A which supports vision, the immune system, and healthy skin may trigger nausea, headaches, blurred vision, and fatigue.

He notes that levels of vitamin C in the blood ‘cannot be pushed beyond a certain level’.

But despite the consequences, and in a bid to supposedly boost immunity, IV drips offered by clinics often include doses as high as 25,000mg which is more than 600-times an adult’s daily recommended dose of 40mg.

‘Linking higher doses of vitamin C to improved immunity is not backed by science.

‘Since the body doesn’t store it, the excess will be disposed of through urine increasing the risk of kidney stone creation,’ Dr István said.

The doctor is of the opinion that despite the health risks involved, people only flock to IV drip clinics due to the health claims made by them.

On the other hand, advocates of IV drip clinics argue that a high concentration of vitamins and nutrients allows the body to absorb them more quickly and efficiently.

In response, Dr István said, ‘This is false. Since vitamins administered via IV bypass the gut-liver system, larger quantities enter the body than what it can safely tolerate.

‘This leads to dangerously high levels of nutrients and risks toxicity.

‘While the body has the ability to control the absorption of the nutrients consumed orally, IV therapy doesn’t allow for any “protective mechanism”.’

He adds, ‘As boring as it may sound, a diet rich in whole foods are generally enough to cover a healthy body’s needs.

‘By eating the whole fruit, vegetable, or meat, we benefit from the synergistic effect of vitamins, nutrients, and fibres together and this is what the body best responds to.

‘Supplementing specific vitamins separately or in combination will just not yield the same results.’

According to Dr István, only a small section of people needs to take supplements and these include those who are pregnant or those who need folic acid, and those suffering from extremely rare conditions that prevent them from absorbing sufficient nutrients from their food such as Crohn’s disease, short-bowel syndrome, and cystic fibrosis.

However, once these conditions are professionally diagnosed, these people should only opt for prescribed treatment and not go in for therapies such as IV treatment, he states.

In view of the popularity of IV drips back in 2019, NHS England’s top doctor Professor Stephen Powis warned the public about the potential dangers of this therapy.

He is reported to have said, ‘People who are healthy do not need IV drips. At best they are an expensive way to fill your bladder – and then flush hundreds of pounds down the toilet – but at worst they can cause significant damage to your health.’