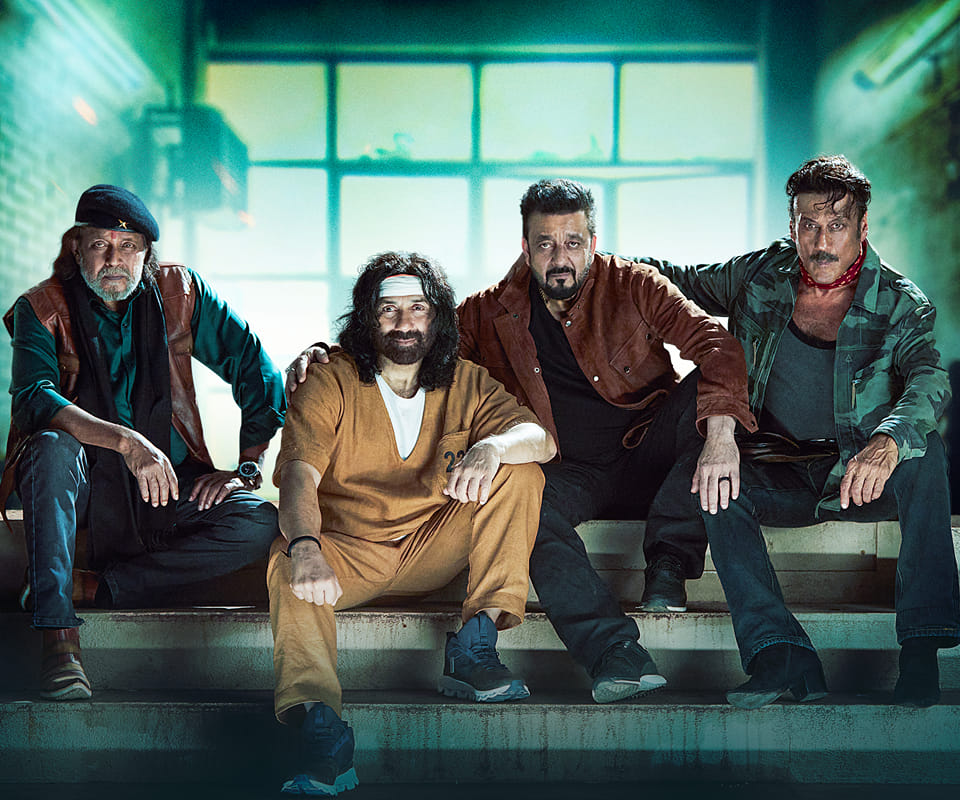 HOW OLD ACTORS HANGING ON TOO LONG ARE HARMING HINDI FILMS

Seeing once popular Bollywood actors desperately trying to cling on to their youth is not only tragic but also destroys previous good work they have done and prevents new talent from emerging.

When an elderly Dev Anand was still acting as a young lead long after his stardom was over, he became a running joke and people forgot the incredible body of work from his younger days, which included some of the finest movies ever made.

He isn’t alone, as many other Hindi heroes have stayed around too long and subsequently suffocated their earlier work. A great new example of this age-old problem is forthcoming film Baap. The ridiculous looking action-drama unites 1980s’ actors Sunny Deol, Jackie Shroff, Sanjay Dutt and Mithun Chakraborty as heroes.

Three of them are now in their sixties, and one is in his seventies, yet all four posed for a promotional image trying to look young, hip, and cool. There is a counterargument that Baap is the Indian version of The Expendables, which has been turned into a successful franchise. But that Hollywood film had older icons like Sylvester Stallone, who continued working hard in the gym, along with a new generation of marketable action heroes like Jason Statham. Unlike Baap, those films had a big budget for flashy special effects. Anyone with a small amount of sense can see Baap will be a colossal failure, but producers have been silly enough to invest in this self-indulgent fantasy.

The next generation who are heading the same way are Akshay Kumar, Ajay Devgn, Shah Rukh Khan, Salman Khan, and Aamir Khan, who are in their 50s. All of them are regularly playing characters decades younger and looking more unconvincing each year. Their once loyal fan following are also starting to notice and that’s why audiences watching their movies have dramatically dwindled. While some are trying to cash in before they are finally booted from the big league, others seem to believe they are Peter Pan and never destined to get old.

In forthcoming film Pathan, 57-year-old Shah Rukh Khan will be starring opposite Deepika Pa­d­u­kone, who is 20 years younger, and doing flying fight scenes. Earlier this year, Akshay Kumar, 55, pla­yed a character in his 20s and starred opposite an actress 30 ye­ars his junior, and 57-year-old Aa­mir Khan had a scene in Laal Singh Chaddha as a college student. But it doesn’t have to be this way.

When Amitabh Bachchan quickly realised playing a younger leading man was no longer an option in the 1990s, he quickly kick-started an exciting new phase of his professional life with age-appropriate projects. He was in his 50s, when he started redefining himself in films like Mohabbatein and Kabhi Kushi Kabhie Gham. In the last 20 years, that transition has paid off because he has done the greatest variety of work imaginable by an actor and created a niche for an older Bollywood hero. He has done everything from comedy and emotional drama to action. By stepping aside, Bachchan let a younger generation of actors thrive, but now those very same ones are hanging on longer than they should, despite the increasing regularity of their films being box office disasters. They should embrace older age and find strong projects that celebrate that.

The knock-on damage has been less young talent in Bollywood than ever before. Today, there isn’t a bankable young leading man in his 20s and the Hindi cinema hero is being suffocated by older actors.