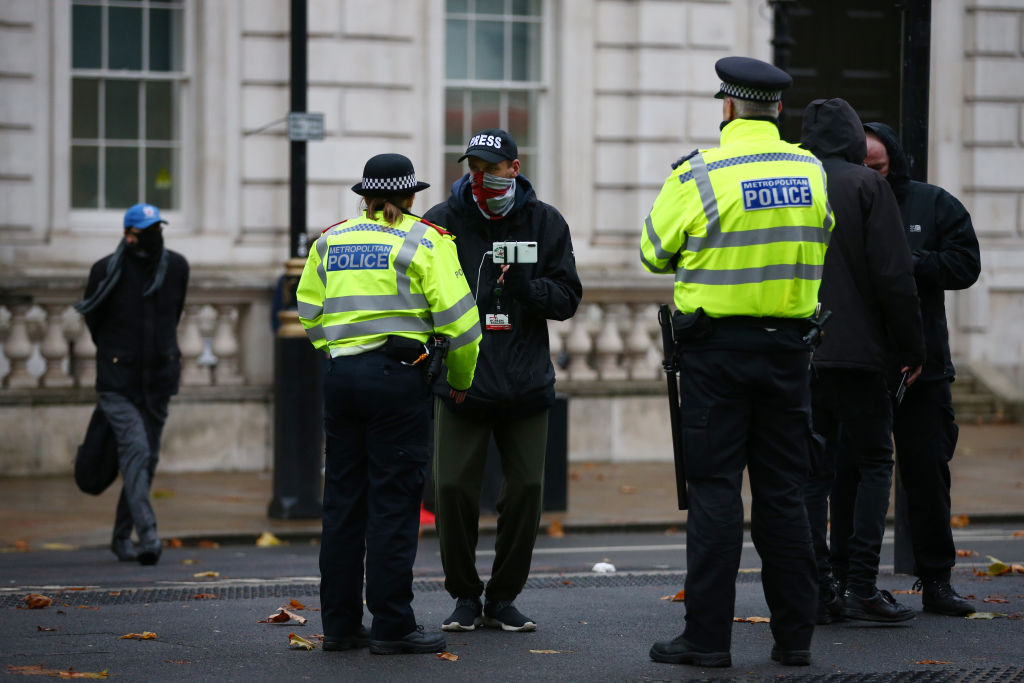 LONDON, ENGLAND – NOVEMBER 27: Metropolitan Police speak to a man during the Refugees welcome: Emergency Solidarity Protest on November 27, 2021 in London, England. Protesters from various organisations including Care4CAlais, Jewish Socialist Group, National Education Union, Muslim Association of Briain and Stop The War Coalition hold a demonstration outside Downing Street in support of the 27 migrants who drowned trying to cross the English Channel during the week. (Photo by Hollie Adams/Getty Images)

The officers, Jonathon Cobban, 35, William Neville, 34, and Joel Borders, 45, have denied the charges.

The ‘racist, misogynist and Islamophobic’ messages were discovered in the group called “Bottle and Stoppers/Atkin’s Puppets” after Couzens was arrested for kidnapping, raping and murdering Everard in March 2021. The material on the WhatsApp group was stored on Couzens’ old phone.

Reports said that jokes were made about West London being a “f****** Somalian s***hole” in the chat, while in another exchange, Neville said his experience of “struggle snuggles” had helped him pin “a 15-year-old girl going mental to the floor”.

Chats also included participants joking about police performing sex acts on domestic violence victims. All the officers were on duty when the messages were sent.

According to prosecutor Edward Brown QC, the seven officers in the group were transferred from the Civil Nuclear Constabulary (CNC) to the Met.

“There is no evidence that any of the defendants, or the other members of the group, ‘called out’ or challenged any of their co-defendants on receipt of what are said by the prosecution to be the offensive messages,” he was quoted as saying at the Westminster Magistrates’ Court by The Independent.

“Each defendant actively participated and chose to remain in the group.”

“The fact that none of those individuals (in the WhatsApp group) took those messages seriously or made a complaint about them is a highly relevant factor, and we say determinative,” he told the court.

It was reported that these officers had undergone training involving segments on responding to sexual violence, domestic abuse and hate crime, unconscious bias and addressing equality and diversity inside policing.

The trial in the case continues.