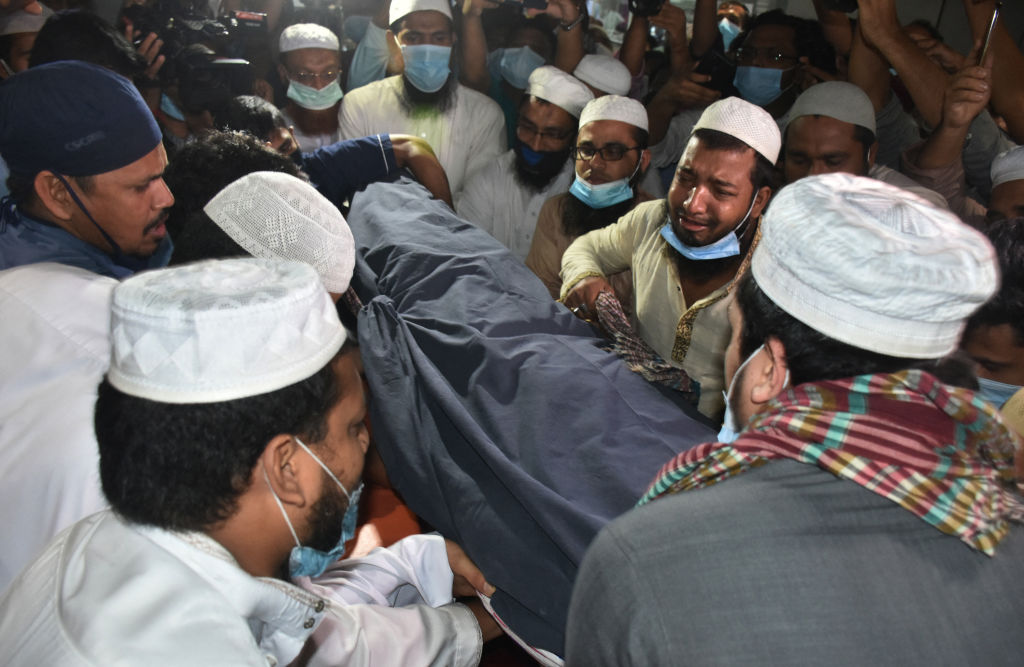 Activists of the Hefazat-e-Islam, Bangladesh’s largest Islamist fundamentalist group, mourn around the dead body of their leader Junaid Babunagari, in Chittagong on August 19, 2021. (Photo by AFP via Getty Images)

TENS of thousands of people attended the funeral of the firebrand leader of Bangladesh’s hardline Islamist outfit just hours after he died in the port city of Chittagong, police said.

Junaid Babunagari – who in November took over as the chief of the fundamentalist Hefazat-e-Islam, the largest Islamist group in Bangladesh – died after a kidney complication.

“Between 70,000 and 80,000 people attended his funeral prayers,” held late Thursday (19) on the grounds of the madrassa where he taught, Chittagong’s deputy chief of police, Afruzul Haque Tutul, said.

Hefazat’s general secretary Nurul Islam Jehadi put the attendance at the funeral prayers held in Hathazari, a town on the northern outskirts of Chittagong, at several hundred thousand.

Babunagari, who was believed to be about 70, died after being rushed to a hospital in Chittagong, the country’s second-largest city, Hefazat spokesman Meer Idris said.

As the news of his death spread, thousands of Hefazat supporters gathered outside the hospital.

Hefazat, which was founded in 2010, draws its support from millions of students and teachers in thousands of madrassas across Bangladesh, a Muslim majority country of 169 million people.

Babunagari rose from obscurity into the spotlight in 2012 when he became the deputy chief of Hefazat. He was known as being a hardliner within the fundamentalist group.

A 2013 rally in Dhaka by thousands of Hefazat supporters demanding a blasphemy law ended in unrest and dozens of deaths.

In recent months, hundreds of Hefazat leaders and activists were arrested in a nationwide crackdown, which followed the group’s deadly protests over Indian Prime Minister Narendra Modi’s visit to Bangladesh. More than a dozen Hefazat activists were shot dead in the incidents.