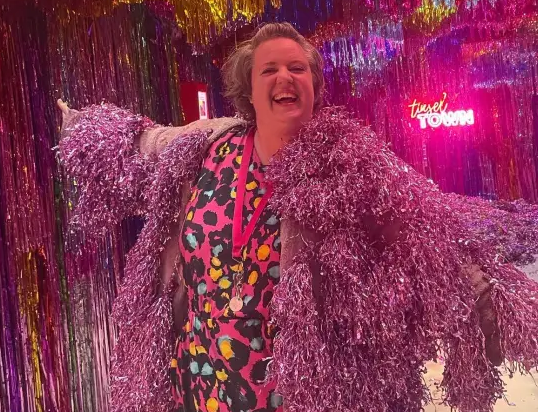 What medics thought was a urinary tract infection, tragically turned out to be a brain tumour for Jo Fletcher-Cross, a mother who is now given just months to live.

Around three months ago Jo began to suffer some health issues and was eventually diagnosed with Glioblastoma, an aggressive form of cancer which is treatable but not curable.

Glioblastoma can occur in the brain or spinal cord. This is the same cancer that Wanted boy band singer Tom Parker, who was 33, died from earlier this year, The Sun said.

Jo has been given the devastating news that she is unlikely to live beyond the next 12 to 18 months. But despite her diagnosis being “bleak” and “fairly grim” the 40-year-old mum-of-one has managed to keep her good sense of humour intact and still performs stand-up comedy.

She reportedly joked: “If I’m still here after that my colleagues will probably start asking ‘why are you still here?’”

Jo adds, “A lot of people are like ‘oh you’re so brave, but what else can you do? There’s not really much choice. You don’t want to spend too much time being miserable.”

She reportedly wants to spend her remaining days doing her favourite things with those she loves the most – one thing she has decided to do is travel abroad with her family one last time before it’s too late.

Her final wish is to go on a trip to Disneyland Paris with her daughter and “just have a great time”.

Jo is quoted as saying, “The big thing is my husband and I just wanted to create lots of memories for our daughter and just show her things and do as much as we can together.

“My daughter is aware now of what’s going on. She knows why we’re doing this trip. She’s a great kid. Telling her obviously wasn’t the greatest day but we took her out to eat lots of ice cream afterwards.”

Before the terrifying diagnosis, Jo had been blissfully living with her husband and 11-year-old daughter Rowan at their home in London.

Apparently, Jo first started suffering symptoms in late June and first noticed something was wrong while she was watching a film with her husband and realised she couldn’t talk.

She is reported to have told MyLondon, “I couldn’t get the words out – just nonsense came out. I could tell in my head what I wanted to say, but couldn’t get it out.”

About 15 minutes later, she regained her speech but since she remained concerned about her condition, she went to A&E the next day.

She was sent home with some antibiotics after being told by a nurse that doctors thought had a urinary tract infection.

However, Jo supposedly felt “strange and just not quite right” for a number of weeks after and therefore decided to get a second opinion a month later.

She is reported to have said, “I had a friend round for dinner and found myself struggling trying to cook something I had made lots of times before.”

To add to that, Jo discovered that she couldn’t remember names and this added to her concerns.

She is quoted as saying, “I was about to submit work for my MA in comedy writing which I had been doing via distance learning at Falmouth University.

“I spent a few days working very hard to finish that, submitted an hour before the deadline.

“The very next morning I got up, sat down at my desk to start work and I could not remember my computer password or how I could possibly get into it.”

She adds, “We went straight up to A&E and a doctor there realised very quickly something wasn’t right. I had a scan which showed ‘something’ on my brain, and after a few hours was admitted to the hospital for a week, during which more tests confirmed a brain tumour.

“I then had surgery to remove about three weeks later which confirmed I had a grade four glioblastoma. They have removed almost all of the tumour but it will grow back, which is why this particular tumour is always fatal.”

Though the tumour has been removed from her brain, Jo is now preparing to have radiotherapy, and after that, she will have a month off in December before she starts six months of chemotherapy.

That month off gives her a small amount of time to go abroad to Disneyland Paris with her daughter.