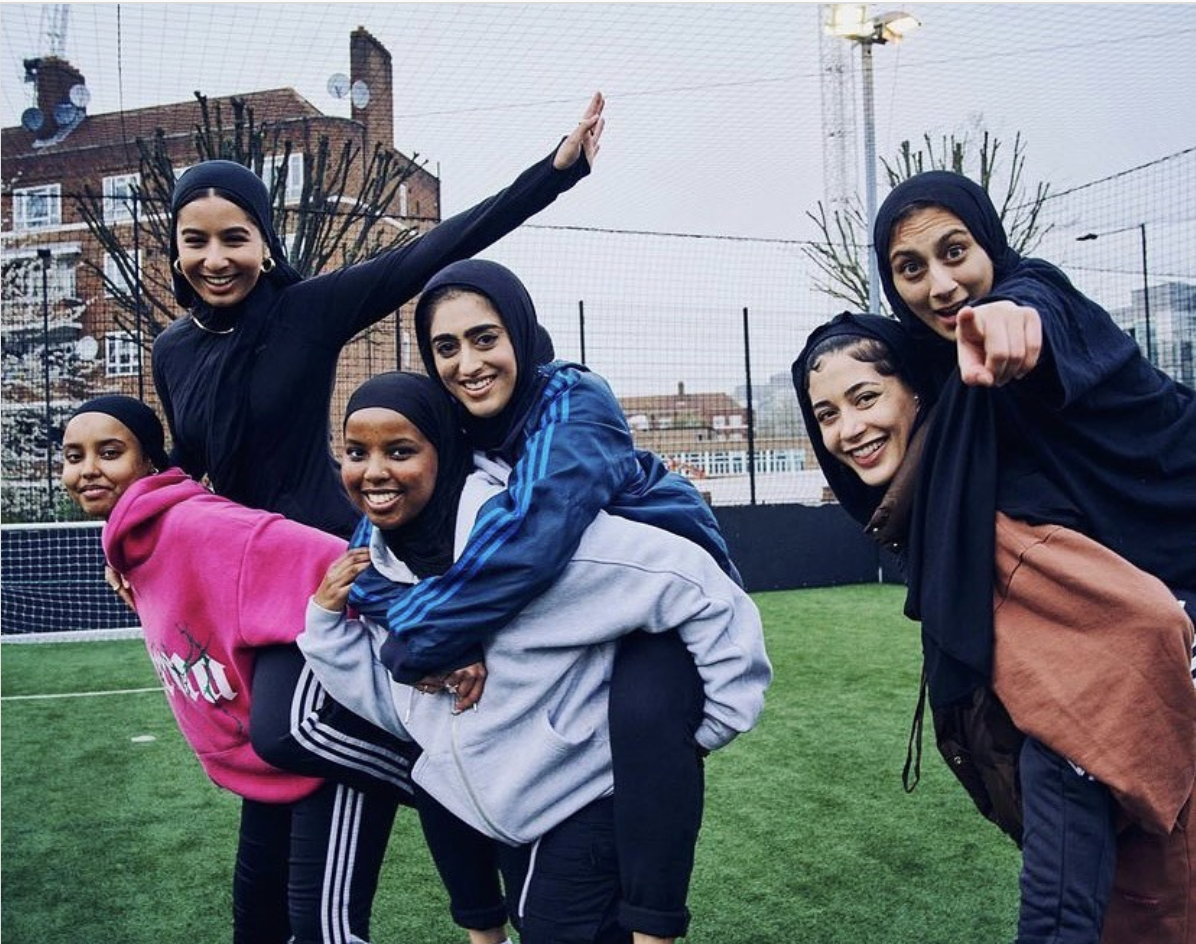 On a soccer pitch in a central London park, Sisterhood Football Club – a Muslim women’s team – is making a substitution.

“Your hijab, tuck it in. It can’t get in the way,” a teammate calls out as the replacement player runs on.

Despite the warmth of the afternoon, all of Sisterhood’s players are clothed from head to foot in the club’s all-black colours. Some wear training trousers, almost all of them have hijab head scarves and one is in a body-length abaya robe.

On the sidelines, a squad member unfurls a mat and kneels to pray while her teammates play on against a team led by Brazilian women in bright pink and blue shirts and shorts.

Founded in 2018, Sisterhood has doubled in size to almost 100 players, allowing its members to enjoy playing football without anyone querying their Muslim dress code or asking why they refrain from socialising in a pub after their games.

“It’s a football club for Muslim women to come and feel free and relaxed and be able to play in their attire,” Kamara Davis, 30, said.

She converted to Islam at age 17 and felt that she would never play soccer again because it seemed incompatible with the religion’s traditional dress. But when she heard about Sisterhood, she jumped at the chance to join.

“Honestly, it just feels so good, it’s like a release. It feels really nice when I am able to shoot the ball with power,” Kamara said.

The club also offers a chance for Muslim women to enjoy a break from traditional roles that many say are expected of them.

Fatima Ali, 26, said some families struggled at first to understand why their young women members wanted to play sport. “I think a lot of people have approved of it,” she said. “But it is still going to take time, it’s not just a one-step process.”

“Even your brothers might be like what’s the point of you going all the way from west London to the south-east but I’ll be like: ‘I enjoy playing, we’ve got a team, this is it, we’ve got a match, we’ve got to go to do this’.”

Yasmin Abdullahi, Sisterhood’s Somali-British founder, recalled the surprise of many fellow female Muslim students when she told them that she was playing football for London University’s Goldsmiths College whilst a student.

“They could not believe that they were seeing a girl that wears a hijab and saying that she plays football,” Abdullahi, a 30-year-old professional fashion model, said.

So she set up the club as a way to reconcile the interest in playing sports among many Muslim women and their adherence to their faith. To underscore the point, Sisterhood’s club badge features the image of a hijab, which was barred by soccer’s world governing body FIFA on safety grounds in 2007. The ban was only relaxed in 2012, with the hijab fully permitted in 2014.

Like many of Sisterhood’s players, Abdullahi is excited about the upcoming World Cup in Qatar. “What comes with the World Cup is such a beautiful experience, watching matches with your family and your friends.”

But like other club members, Abdullahi drew the contrast between the funding for the England men’s team compared with the national women’s team which won the Women’s European Championship this year for the first time.

“If they’d had equal investment and equal opportunity, where would the women be,” she asked.

Sisterhood runs a weekly training session and its first team competes in the Ladies Super Liga for 5- and 7-a-side teams.

Sara Taleghani said she struggled to reconcile her faith and her hopes of playing sports when she was at school in Ireland.

“I constantly had coaches trying to compromise my religion,” Taleghani, who works as a social media manager for a public relations agency, said.

Teachers used to say that her head scarf posed a hazard and they insisted that she wore shorts. “I think that’s the reason I stopped playing sports at school,” Taleghani said.

For Faezeh Deriss, 23, who recently completed a degree in child psychology, being able to wear what she wants while playing is vital.

“I’ve been to a couple of other football places but there weren’t any girls who looked like me,” she said. “Other teams I played with, tried to make me wear shorts. I tried wearing shorts with leggings underneath but it didn’t feel right.”

There was no such conflict at Sisterhood. “I feel confident saying to the team that I am just going to go and pray. It’s not an issue,” Deriss said.

Taleghani said she was encouraged to see other Muslim women’s football teams but she had a sense of regret that some players of her generation will never fulfil their potential, given how recently they were given the chance to play.

“If there had been spaces like this when we were growing up, I know a few girls who would have made it as pros,” she said.

For Abdullahi, Sisterhood’s founder, the most important achievement of the club is the sense of togetherness among its members many of whom have become friends.

“I think the thing that honestly brings tears to my eyes is the fact that we’ve actually built our little community,” Abdullahi said. “The name Sisterhood FC, it’s not by accident like we have literally built a sisterhood.”