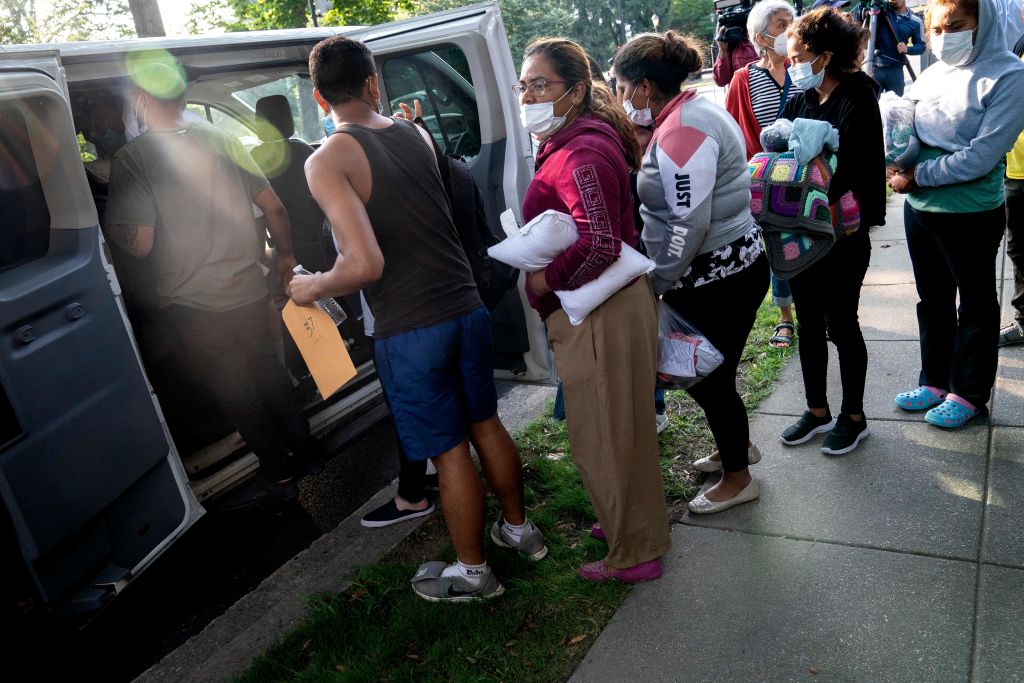 Around 50 of the migrants, including children, landed Wednesday on the island, where Democratic presidents from John F. Kennedy to Bill Clinton have summered, and former president Barack Obama owns an estate.

“Immigrants are being dropped off on Martha’s Vineyard by chartered flights from Texas. Many don’t know where they are. They say they were told they would be given housing and jobs,” said Dylan Fernandes, a local state legislator.

Half-a-day later two buses also from Texas deposited dozens of migrants in front of the Washington residence of Vice President Kamala Harris, part of a five-month-old operation by Texas Republican Governor Greg Abbott to pressure Democrats on the immigration issue.

“We are not a sanctuary state. . . We will help facilitate that transport for you to be able to go to greener pastures,” DeSantis said at an official event in Florida Thursday.

“In Florida, we take what is happening at the southern border seriously,” he said.

Busing thousands of migrants
The moves came as DeSantis and Abbott, two of the country’s most prominent and combative Republican governors, have sought to highlight the issue of tens of thousands of migrants trying to cross the southern border into the United States each month.

Abbott, whose state is the first destination for most of the migrants crossing from Mexico, has since April sent about 10,000 of them northward, mainly to Washington, Chicago and New York. These cities have declared themselves “sanctuaries” for migrants — meaning they will not be arrested solely for not having legal immigrant status.

Yet most of those being transported have been permitted to stay in the country by border officials after officially requesting asylum until their cases are reviewed.

The Texas governor, who is seeking re-election in November, said Thursday that Vice President Harris claims the border is secure and denies the existence of an immigration crisis.

“We’re sending migrants to her backyard to call on the Biden administration to do its job & secure the border,” he tweeted.

DeSantis, also in a re-election battle, has supported Abbott, and is also a top contender to run for president under the Republican banner in 2024.

Charlie Crist, the Democrat challenging DeSantis for the Florida governorship, said sending the migrants to Martha’s Vineyard was a wholly political move.

“Florida is spending $12 million to fly innocent migrant children out of our state when that money could be spent on fighting to help Floridians and lower costs,” Crist said on Twitter.

“Everything Ron DeSantis does is to score political points and feed red meat to his base in his thinly veiled attempt to run for president.”

Christina Pushaw, a spokesperson for DeSantis, taunted the Martha’s Vineyard community, which announced efforts to house and feed the migrants.

“Residents of Martha’s Vineyard overwhelmingly support illegal immigration and call for more diversity. Governor DeSantis was kind enough to grant their wishes,” she wrote on Twitter.

“There may be space at the Obamas’ mansion for a few dozen illegal aliens,” she said.