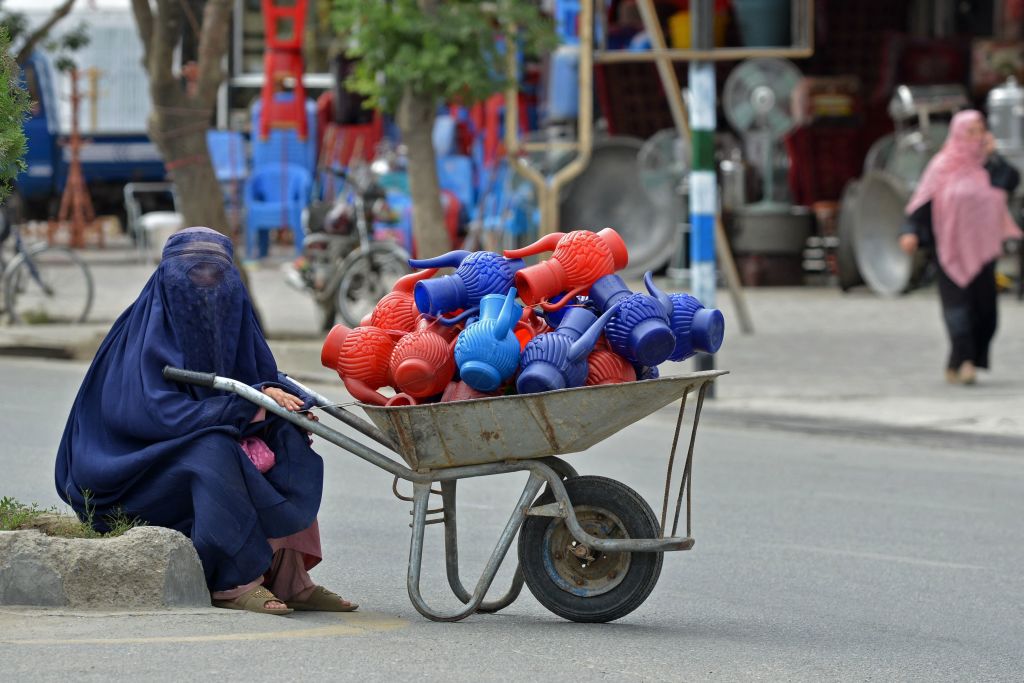 An Afghan burqa-clad woman sits next to a wheelbarrow loaded with plastic water cans along a street in Kabul on May 31, 2022. (Photo by Sahel ARMAN / AFP) (Photo by SAHEL ARMAN/AFP via Getty Images)

Ahead of the religious scholars’ grand gathering of Taliban, the deputy Prime Minister of the Taliban, Mawlawi Abdul Salam Hanafi announced on Wednesday that the meeting will convene without the participation of women.

Over 3,000 religious scholars, tribal elders, intellectuals, influential figures and national traders will attend the gathering at the Loya Jirga Hall in Kabul on Thursday without the participation of women, stated the deputy Prime Minister, Khaama Press reported.

“The women are our mothers, sisters, we greatly respect them, when their sons are in the gathering it signifies that they are also involved, in a way, in the gathering,” he added.

On being asked whether women could become a part of the assembly, deputy minister Hanafi responded that male delegates would speak on their behalf.

According to Khaama Press, the senior Taliban official stated that the assembly was called at the Ulema’s request and the Taliban organized it so that they could talk over a variety of topics, like Islamic regime, national unity, and the improvement of economic and social affairs.

However, civil societies have strongly condemned the decision and have called the gathering illegitimate in absence of women.

It remains unclear what issues would be discussed under the gathering’s agenda and whether the issue of reopening girls’ schools and women’s rights is considered an integral part of the talks, Khaama Press reported.

Taliban has suspended the secondary education of girls and enforced a strict form of Hijab. They have also provided no opportunities for Afghan women to participate in political and public life, to fit the pattern of absolute gender segregation that is aimed at making women invisible in society.

Afghan women had enjoyed unfettered freedom in the country for so many years but are now staring at a bleak future due to a number of restrictions imposed by the Taliban governing aspects of their lives within ten months of Afghanistan’s takeover.

Women employees in some banks have already stopped working. Even women police officers have received threats.

Away from the urban areas, women and girls are not allowed to move out on the streets or travel without a male family member accompanying them.

Women are being curtailed from wearing make-up as well as from their reproductive rights.

Unrecognized by most of the international community, the Taliban-led government has committed to disrespecting the human rights of women. The atrocities of the Taliban against Afghan women have been on an incessant surge since the organization seized power in Afghanistan in August last year, banning young girls and women of humanitarian rights.