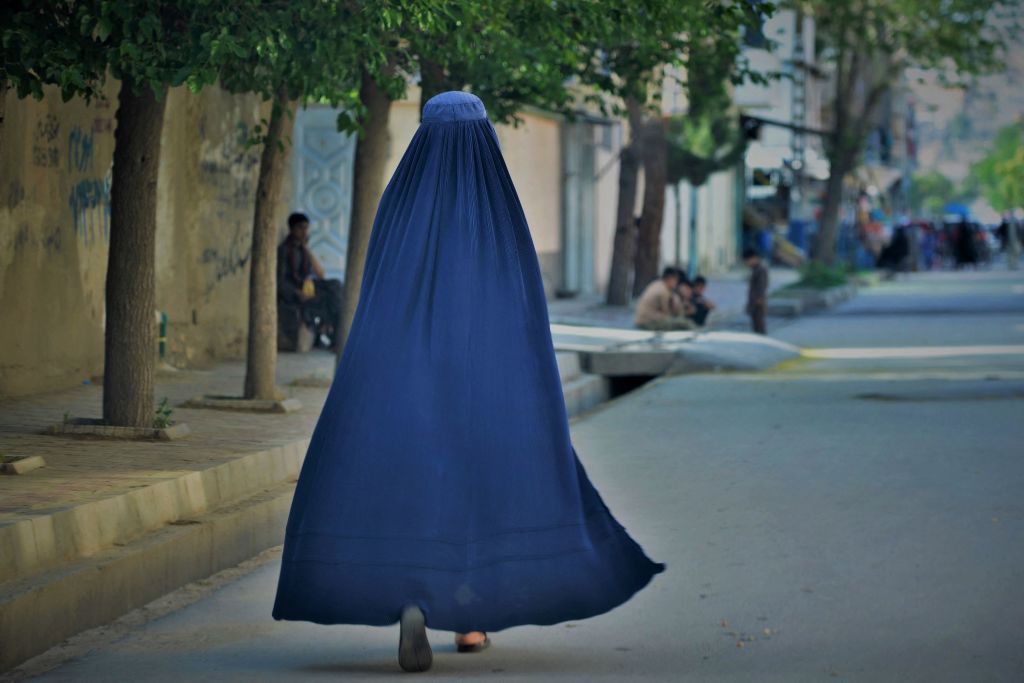 TOPSHOT – A burqa-clad woman walks along a street in Kabul on May 7, 2022. – The Taliban on May 7 imposed some of the harshest restrictions on Afghanistan’s women since they seized power, ordering them to cover fully in public, ideally with the traditional burqa. (Photo by Ahmad SAHEL ARMAN / AFP) (Photo by AHMAD SAHEL ARMAN/AFP via Getty Images)

Taliban crackdown on Afghan women and girls continues as one of the Taliban guards barred female students from entering the campus for not wearing a Burqa on Sunday.
The incident occurred at the Badakhshan University in northeastern Afghanistan.

The Afghan girls were forced to remain outside the entry gate as the students were not following the norms of the Taliban’s preferred attires, Khaama Press reported.

Taliban’s restriction on women’s freedom of movement, speech, expression, work opportunities, and attire does not just end here. The group has also barred girls from attending school from sixth grade since taking control of war-torn Afghanistan.

Khaama Press reported quoting the president of Badakhshan University, Naqibullah Qazizada who said that the terror outfit’s violence and unlawful conduct toward the students will be taken care of and the student’s request would be realized.

After the Taliban seized control of Afghanistan on August 15, 2021, they immediately began rolling back the rights of women and girls. Women began to protest on the streets since Taliban’s first week in power, despite the grave risks they faced in doing so.
By early September, women-led protests were taking place in Herat province in western Afghanistan and quickly spread across multiple provinces.

According to Human Rights Watch, the Taliban response was brutal from the beginning, beating protesters, disrupting protests, and detaining and torturing journalists covering the demonstrations. The Taliban also banned unauthorized protests. Over time, the Taliban’s abusive responses escalated, with a particularly brutal response to a protest on January 16 in Kabul, when Taliban members threatened, intimidated, and physically assaulted protesters, using pepper spray and electric shock devices.

Notably, the situation of human rights in Afghanistan has worsened since the collapse of the Afghan government and the Taliban’s return to power in August last year. Although the fighting in the country has ended, serious human rights violations continue unabated, especially against women and minorities.

Besides this, the continuously soaring prices of food products in the country have emerged as a new challenge for Afghans. In a short span of fewer than three months, food prices have almost doubled, reported Khaama Press.