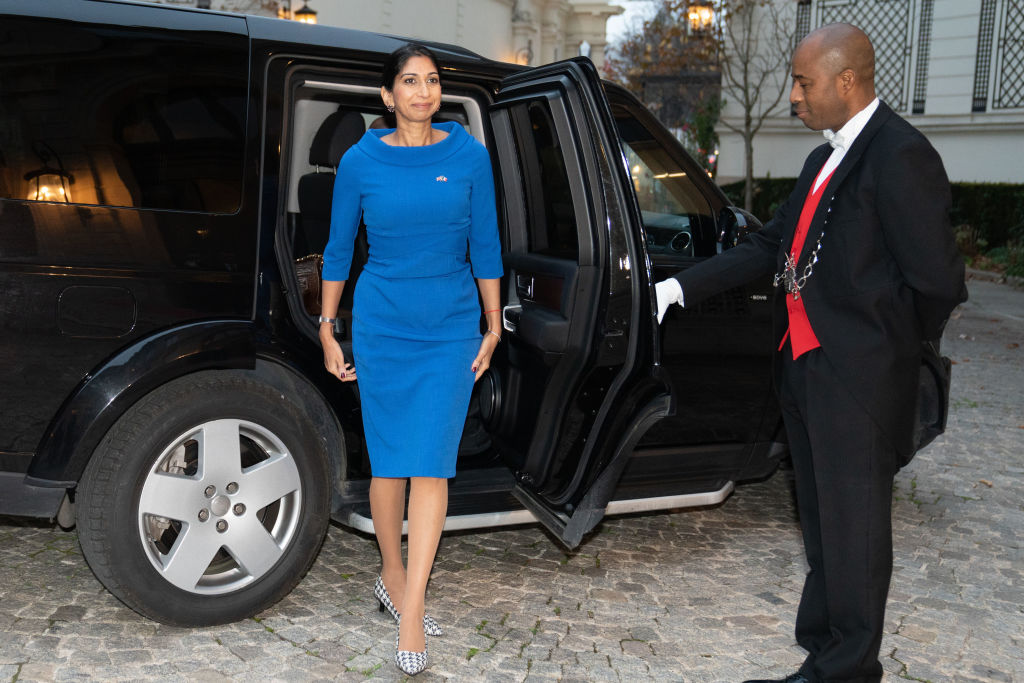 PARIS, FRANCE – NOVEMBER 14: Home Secretary Suella Braverman arrives at the Interior Ministry in Paris, France where she signed an historic deal with her French counterpart, Interior Minister Gerald Darmanin, on November 14, 2022 in Paris, France. The deal aims to tackle the small boats crisis as pressure mounts on the British immigration system, with Channel crossings topping 40,000 so far this year. (Photo by Stefan Rousseau – Pool/Getty Images)

The Indian-origin minister is in France to finalise the new arrangement, which will also see specialist UK officers embedded with their French counterparts for the first time as part of the new financial agreement.

Under the new UK-France joint agreement, the number of officers patrolling the French coast at Calais to stop people setting off to the English coast at Dover will rise from 200 to 300.

“There are no quick fixes, but this new arrangement will mean we can significantly increase the number of French gendarmes patrolling the beaches in northern France and ensure UK and French officers are working hand in hand to stop the people smugglers,” Braverman said.

“We must do everything we can to stop people making these dangerous journeys and crack down on the criminal gangs. This is a global challenge requiring global solutions, and it is in the interests of both the UK and French governments to work together to solve this complex problem,” she said.

British Prime Minister Rishi Sunak also flagged the issue as an “absolute priority” and said he was “confident we can bring the numbers down”.

“I do think that the absolute priority that British people have right now, as do I, is to grip illegal migration,” Sunak told reporters en route to Indonesia for the G20 summit as the agreement was announced in London.

According to official estimates, more than 40,000 people have crossed in small boats so far this year, up from 28,526 last year and 8,404 the year before.

The new deal with France includes a 40 per cent increase in the number of UK-funded officers patrolling French beaches, to come on stream in the coming months.

The UK Home Office said the pact is aimed at enhanced information sharing, improved understanding of the threat, and ensuring UK expertise is at the heart of efforts to disrupt crossings and clamp down on people smugglers.

This more “integrated approach” will also include strengthened operational cooperation, including joint UK-France analysis teams supporting the coordination and exchange of information by French command headquarters.

The Home Office noted: “Joint working between UK and French officers so far has secured more than 140 convictions connected to people smuggling since the start of 2020, and these criminals now face a combined 400 years behind bars.

“The UK-France Joint Intelligence Cell, which has so far dismantled 55 organised crime groups and secured over 500 arrests since its inception in 2020, will also be expanded.” The latest multi-year arrangement is expected to bolster security at ports to help clamp down on illegal entry by funding investment in cutting-edge surveillance technology, drones, detection dog teams, CCTV and helicopters to help detect and prevent crossings.

It will also go towards supporting reception and removal centres in France for migrants whose journeys to the UK are prevented, to further deter crossing attempts.

A new task force will also be set up, focused on reversing the recent rise in Albanian nationals and organised crime groups exploiting illegal migration routes into Western Europe and the UK.

“This enhanced approach will boost joint British and French collaboration, which has already prevented over 30,000 illegal crossing attempts since the start of the year – more than 50 per cent more than at the same stage last year,” the Home Office said.

“The renewed partnership marks the next step in joint efforts to reduce these dangerous crossings and paves the way for deeper cooperation between the two countries in future, looking ahead to next year’s UK-France leaders’ summit,” it added.

Braverman is to travel to Frankfurt in Germany later this week, where she will meet her international counterparts from the G7 to discuss a range of priority issues including tackling serious organised crime.

Her office said that she also plans to meet with neighbouring countries as soon as possible as part of the UK’s ongoing cooperation with European partners to drive progress on the issue of illegal migration.

“The UK’s work with international partners is a key part of the government’s wide-ranging approach to fix the broken asylum system, break the business model of people smugglers facilitating these journeys and clamp down on illegal migration,” the Home Office said.

As part of measures, the Nationality and Borders Act will introduce life sentences for people smugglers and increase the maximum penalty for entering the UK illegally.

The Home Office also hailed the government’s controversial “world-leading partnership with Rwanda”, which will see some illegal migrants relocated there to have their claims considered in the African country.