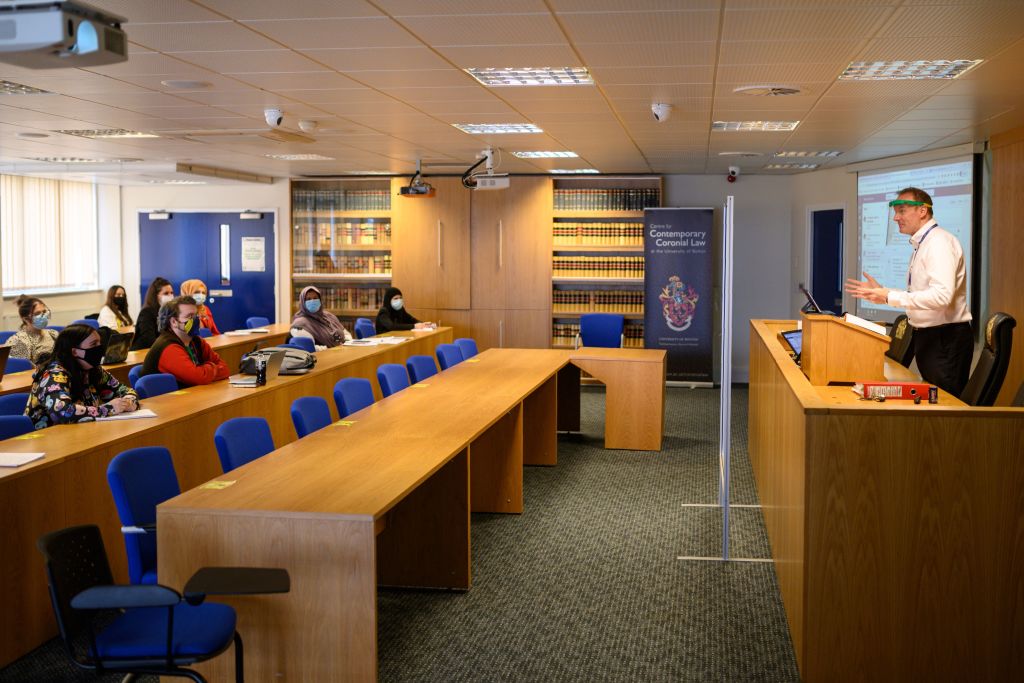 Lecturer Ian Bowden teaches law students wearing face coverings to help mitigate the spread of the novel coronavirus COVID-19, from behind a perspex screen during a lecture in a classroom designed to replicate a court room at the University of Bolton, in Bolton, northern England on October 7, 2020. – The University of Bolton has introduced numerous Covid-safety measures across its campus including: airport-style temperature scanners, socially distanced seating, perspex screens and visors for lecturers, a bicycle loan scheme for students, one-way routes throughout campus buildings and additional online resources for student learning. Hundreds of thousands of students have begun a new academic year at universities across the UK. (Photo by OLI SCARFF / AFP) (Photo by OLI SCARFF/AFP via Getty Images)

Britain’s student loan borrowers will be further protected from rising inflation rates with additional cuts to interest rates for those on Plan 2 and Plan 3 loans.

Student loan interest rates will now be capped at 6.3 per cent from September 2022. The government intervened in June to protect borrowers in response to the rise in the rate of RPI due to global economic pressures which meant student loan borrowers faced a 12 per cent interest rate in September.

To provide reassurance for student loan borrowers on Plan 2 (undergraduate) and Plan 3 (Postgraduate) loans, the Government used predicted market rates to bring forward a cap on interest rates to a maximum of 7.3%. The actual market rate is now 6.3 per cent, so the cap has been reduced to this figure.

By setting an interest rate of 6.3 per cent rather than the expected 12% this will bring down the student loan interest rates by the largest amount on record and will mean, for example, a borrower with a student loan balance of £45,000 would reduce their accumulating interest by around £210 per month compared to 12% interest rates. This is on the total value of the loan, as monthly repayments do not change.

The government is taking every opportunity to protect the public from the rising cost of living and global economic pressures.

Minister for skills, further and higher education Andrea Jenkyns said, “We understand that many people are worried about the impact of rising prices and we want to reassure people that we are we are stepping up to provide support where we can.

“For those starting higher education in September 2023 and any students considering that next step at the moment, we have cut future interest rates so that no new graduate will ever again have to pay back more than they have borrowed in real terms.”

Monthly student loan repayments are calculated by income rather than interest rates or the amount borrowed. Unlike for commercials loans, repayments will stop for any borrowers who earn below the relevant repayment threshold.

A spokesperson for the Student Loans Company said, “The change in interest rates is automatically applied so customers don’t need to take any action. We encourage customers to use SLC’s online repayment service to regularly check their loan balance and repayment information, as well as ensure their contact information is up-to-date.”

For new students from August 2023, student finance will be put on a more sustainable footing. Student loan interest rates will be reduced so that they will not, in real terms, repay more than they borrow.

In response to the rising inflation, the government is providing support for households to help those struggling to make their incomes stretch to cover the basics. The government is also providing eight million of the most vulnerable households with £1,200 extra support this year, with all domestic electricity customers receiving at least £400.

Last week, it was announced that National insurance contribution threshold will be raised, giving the typical worker a tax cut of £330 per year and from next week (from 14 July), millions of low-income households will start to receive the first instalment of their Cost of Living Payment.