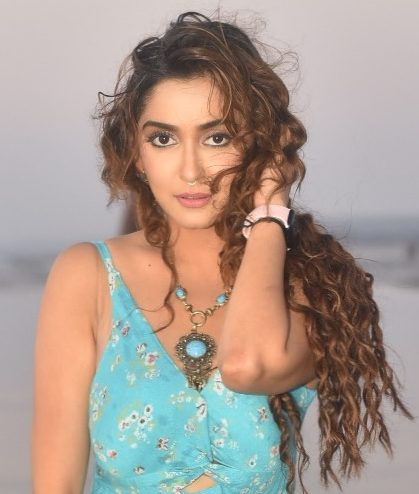 POPULAR actress Srishti Jain has shown off an impressive range since making her TV debut in acclaimed drama Suhani Si Ek Ladki in 2016.

She has since then lit up hit serials Meri Durga, Main Maike Chali Jaungi, Tum Dekhte Rahiyo and Hamari Wali Good News. The superbly talented 25-year-old is now turning her attention to cinema and will make her big screen debut in a forthcoming Punjabi movie. It will mark a new phase for a versatile talent, who has consistently taken up performance-driven roles in diverse projects.

Which of your characters have you enjoyed playing the most?
I really can’t pick between the roles I’ve played, as they’re all special to me. But if I have to pick one I really enjoyed and challenged me most, it will have to be Durga (from Meri Durga). There were a lot of physical and emotional challenges during that show.

Was that the most challenging among the roles you have played?
Yes, it was, as I was playing an athlete who wins at nationals, so it had a lot of track race and training scenes involved. Also, I did quite a few action sequences, which I enjoyed so much.

Tell us about your Punjabi film debut?
I believe you don’t grow if you stay in your comfort zone. Doing a Punjabi film, taking upon learning a new language and trying out a different medium seemed like the right thing to do at this time in my career. It’s a fun project and the team’s great. I can’t share a lot of details, but it’s an action film. I’m the romance and colour part of it.

Is the plan now to focus on films?
I would like to wait and see what opportunities open up after this film. I would love to still do TV if something really interesting comes up. But as of now, I want to try my hand at films and the web.

Do you have a dream role?
I have wanted to be an action hero since I was a kid. So, I guess that’s my dream role. I want to do an action-packed film. I also plan on taking up martial arts post this film, so that I can attract such opportunities.

Who would you love to work with?
Sushant Singh Rajput was an actor I really wanted to work with! I looked up to him. It’s sad that I’ll never be able to do that. Rajkumar Hirani, Farhan Akhtar and Anurag Kashyap are directors I do want to work with.

Do you have any ambitions or plans away from acting?
I always wanted to have my own clothing line and am working towards it. I hope I can get it up and running soon. Fingers crossed. I also want to have my own production house. I want to produce and direct.

What inspires you?
My dreams and my family inspire me most. My mom and dad are both such hard-working individuals. I’ve seen them both work and always make an amazing life for my sister and I. And I’ve always had such big dreams. I don’t think I’ll be able to stop unless I’ve fulfilled them.

If you could master something new, what would it be?
Like I said, I want to train in martial arts. I think a girl who can fight on screen just adds to the entire aura. It’s also something that will make me feel very empowered.

Tell us something about you not many people know?
I write poems, it’s something I do in my free time. Not a lot of people know. I also am very intuitive. I always get a feeling if something is good or bad for me, be it a situation or people. My intuition is very very strong.

Why do you love being an actress?
It’s been my only dream since I was five. But you know ever since I’ve actually started acting, I have realised that I love everything about the shooting process, the before prep, being in front of the camera, enacting the writer’s vision and being able to do justice to the character that I am playing. Every day, it’s something else that’s exciting, which I’m doing! I love it. I know no other way to live now.