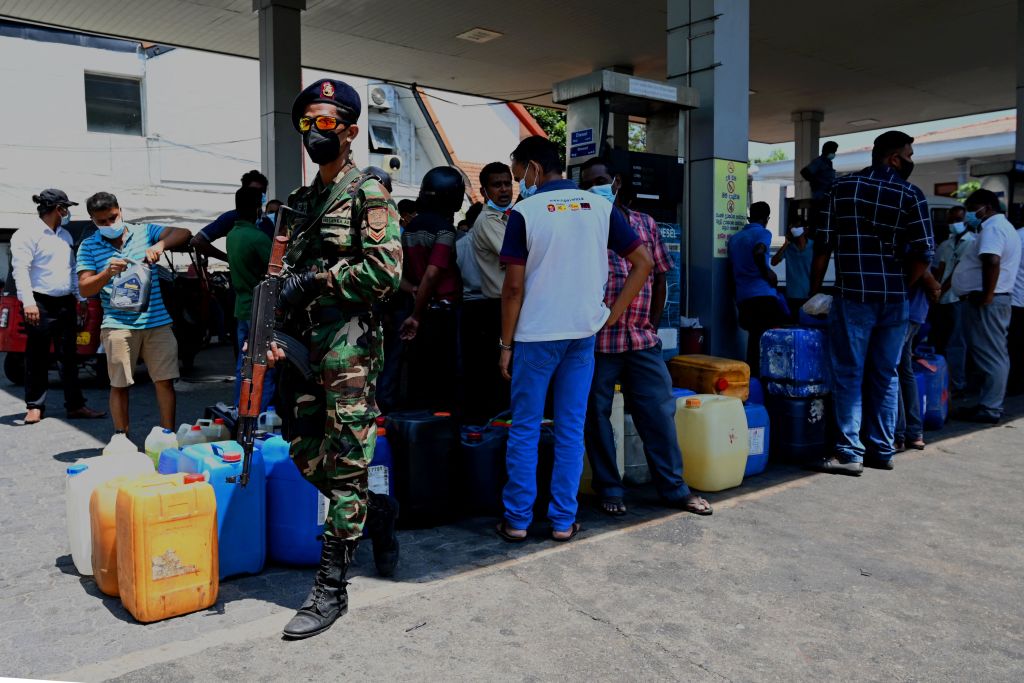 A soldier stands guard as people stand in a queue to buy diesel at a Ceylon Petroleum Corporation fuel station in Colombo on March 29, 2022. (Photo by Ishara S. KODIKARA / AFP) (Photo by ISHARA S. KODIKARA/AFP via Getty Images)

Inflation in crisis-hit Sri Lanka has surged past 50 per cent for the month of June, the statistics department said on Thursday, as the country’s economy came to a grinding halt after it ran out of foreign exchange reserves to import fuel and other essentials.

The headline inflation for the month of June surged to 54.6 per cent, up from the 39 per cent reported last month, according to the Colombo Consumer Price Index (CCPI).

The year-on-year food inflation also surged by 80 per cent, up from 57 per cent reported last month, it said.

The government’s statistics office said on Tuesday that the economic growth in the first quarter of this year is projected to see a minus 1.6 per cent growth due to the ongoing economic crisis.

A release said that fuel shortages had impacted all sectors with reduced production contributing to the negative growth.

The Sri Lankan economy has virtually come to a grinding halt after it has run out of foreign exchange reserves to import fuel and other essential commodities.

Meanwhile, the National Transport Commission said a 22 per cent bus fare hike would be implemented from Friday midnight, the fourth hike in public transport fares since the Central Bank decided to allow a free float of the local rupee against the US dollar on March 7.

On Thursday, the International Monetary Fund said it has concluded “constructive and productive” discussions with Sri Lankan authorities, but warned that the crisis-ridden island nation needs to do more on debt restructuring and step up structural reforms to address corruption vulnerabilities as well as take steps to tackle inflation before a bailout package is finalised.

“Sri Lanka is going through a severe economic crisis. The economy is expected to contract significantly in 2022, while inflation is high and rising. The critically low level of foreign reserves has hampered the import of essential goods,” the IMF said in a statement.

On Monday, the Sri Lankan government announced that only essential services will operate from midnight till July 10 and all other operations will be temporarily suspended as the island nation of 22 million faces an acute fuel shortage.

The nearly-bankrupt country, with an acute foreign currency crisis that resulted in foreign debt default, had announced in April that it is suspending nearly USD 7 billion foreign debt repayment due for this year out of about USD 25 billion due through 2026.