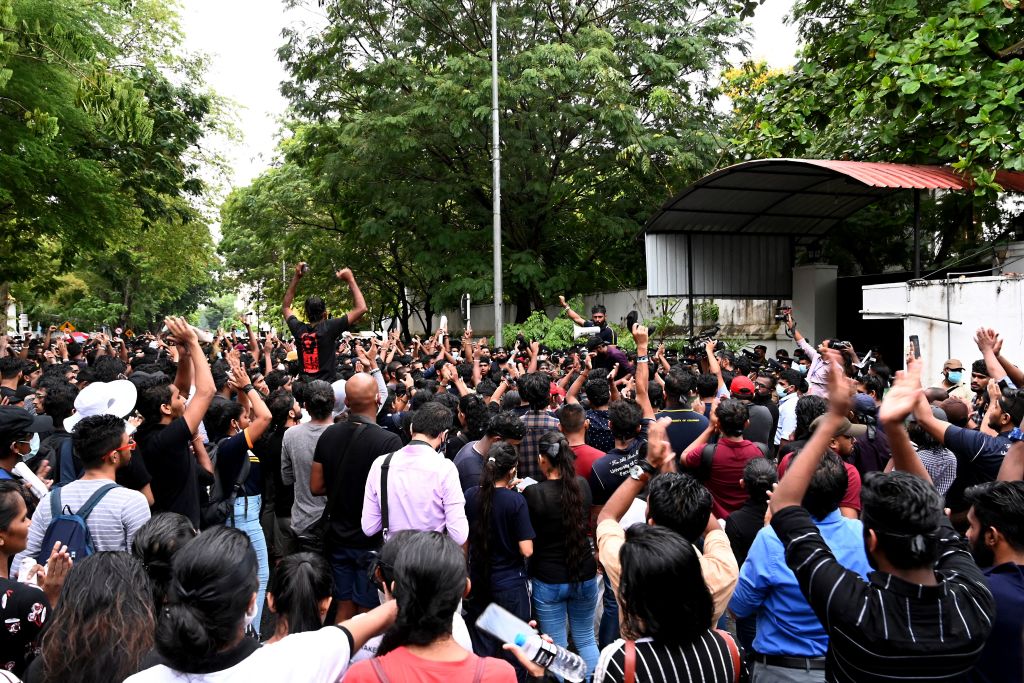 Severe shortages of food, fuel and other essentials – along with record inflation and crippling power cuts – have inflicted widespread misery in the country’s most painful downturn since independence from Britain in 1948.

President Gotabaya Rajapaksa’s once-powerful ruling coalition is in turmoil after a string of defections, capped on Tuesday (5) by the announcement of the new finance minister’s resignation just one day after taking office.

Public anger is at a fever pitch, with crowds attempting to storm the homes of several government figures since the weekend and large demonstrations elsewhere in the country.

One newly independent lawmaker who broke ranks with the president’s party told parliament it was time for the leader to step down and make room for others to address the worsening crisis.

“If we don’t act now, there will be a river of blood in the country,” said Wijeyadasa Rajapakshe.

“We have to forget party politics and ensure an interim government.”

Tuesday’s parliamentary session was the first since dozens of MPs withdrew their support for Rajapaksa’s government, including 16 lawmakers from the president’s own Sri Lanka Podujana Party (SLPP) and its former coalition allies.

The government is now five short of a majority in the 225-member House, but it was unclear whether legislators would attempt to introduce a no-confidence motion that would compel it to resign.

Opposition parties have already rebuffed the president’s call to join a unity administration helmed by him and his elder brother, prime minister Mahinda Rajapaksa.

Their government imposed a state of emergency last week in an effort to quell rising street protests, but the ordinance is set to expire next week without parliamentary approval.

Nimal Lanza, a former minister who has also abandoned Rajapaksa’s administration, conceded that the ruling party no longer had a mandate to govern and threw his support behind the crowds calling for the president’s resignation.

“I worship and appeal to you to take the side of the protesters,” he told parliament, addressing the prime minister, who attended the session, but remained silent.

Every member of Sri Lanka’s cabinet except the president and prime minister Mahinda resigned late Sunday (3), but an overture to opposition parties was rejected within hours.

Former justice minister Ali Sabry was appointed to helm the finance ministry on Monday (4), replacing the president’s brother Basil Rajapaksa, but abruptly resigned after just one day in office.

“Whilst I regret the inconvenience caused, I believe I have always acted in the best interests of the country,” Sabry said in a statement, adding that a more capable candidate was needed to rescue the country from its parlous financial position.

Boisterous demonstrations have spread across the country of 22 million despite the emergency laws allowing troops to detain participants.

Crowds have attempted to storm the homes of more than a dozen government figures, including the president’s house in Colombo.

Protesters there torched the vehicles of security forces, who responded by firing rubber bullets and tear gas.

Most demonstrations have been peaceful, with Catholic clergy and nuns led by Sri Lanka’s Cardinal Malcolm Ranjith leading a silent procession in the capital.

A critical lack of foreign currency has left Sri Lanka struggling to service its ballooning $51 billion (£38.84 bn) foreign debt, with the pandemic torpedoing vital revenue from tourism and remittances.

The result has seen unprecedented food and fuel shortages along with record inflation and crippling power cuts, with no sign of an end to the economic woes.

The government plans to negotiate an IMF bailout, but talks are yet to begin.