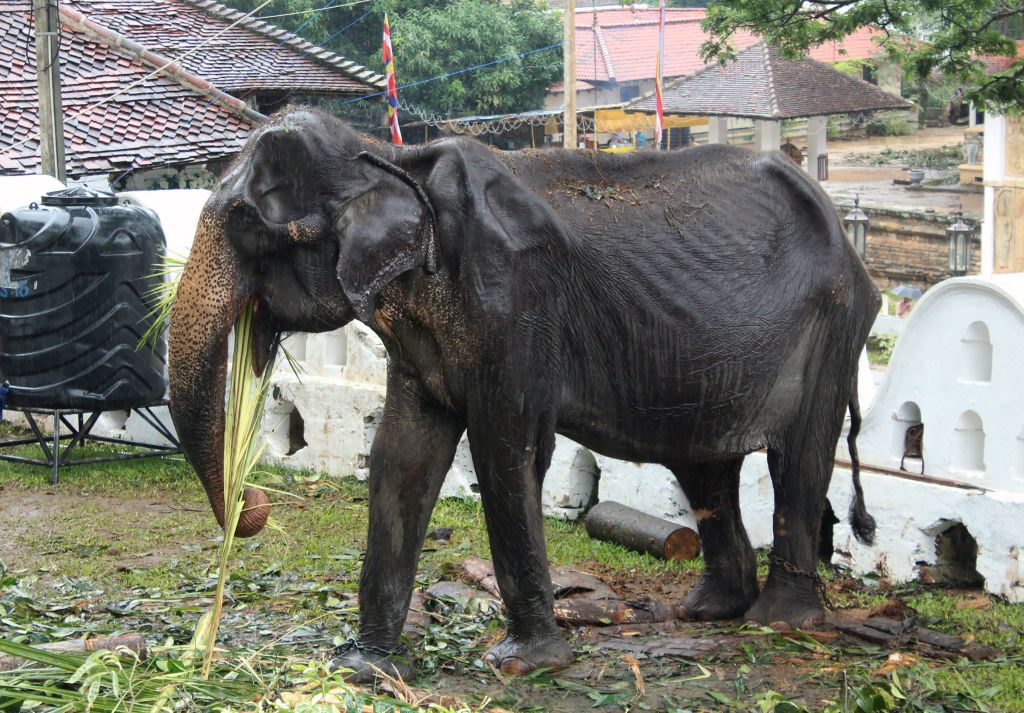 This photo taken on August 13, 2019 shows 70-year-old emaciated elephant Tikiri eating at the Temple of the Tooth in the central city of Kandy, where she was brought to attend an annual Buddhust pageant. (photo by STR/AFP/Getty Images)

An emaciated 70-year-old elephant that caused a social media outcry after being forced to take part in an annual Buddhist pageant in Sri Lanka has died, officials said Wednesday.

The government has ordered an autopsy for Tikiri, a domesticated Asian elephant that died Tuesday night in Kegalle, 80 kilometres (50 miles) east of the capital Colombo, a wildlife department official said.

Elephant expert Jayantha Jayewardene said the jumbo had been ill-treated.

“Tikiri was severely undernourished,” Jayewardene told AFP. “It is a wonder that she lived this long.”

The animal was withdrawn from the finale of the annual Temple of the Tooth pageant in Kandy last month after a social media firestorm erupted against parading the feeble animal.

Lek Chailert, the founder of the Save Elephant Foundation, wrote on social media that spectators did not realise how weak Tikiri was because of her costume.

After the public outcry, Wildlife Minister John Amaratunga ordered an investigation into why Tikiri was made to participate in the annual parade despite her failing health, but the outcome was not made known.

The Temple of the Tooth, Buddhism’s holiest shrine on the island, holds the annual festival with traditional drummers and dancers as well as nearly 100 elephants.

Many rich Sri Lankans keep elephants as pets, but there have been numerous complaints of ill-treatment and cruelty.

Guinness World Records says the average age of an Asian elephant is around 60 years, while the oldest on record was Lin Wang, a bull who carried supplies for the Japanese army in what was then Burma during World War II before dying in a Taiwan zoo in 2003 aged 86.