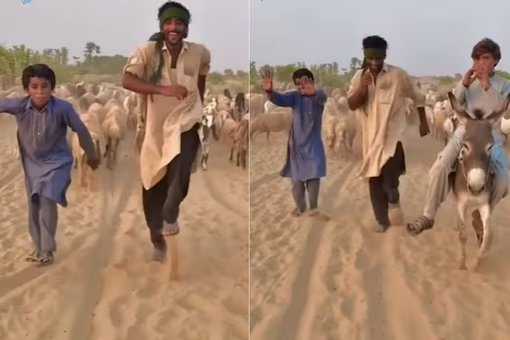 A video of a shepherd dancing to the popular song “Peeche Barati Aage Band Baja” from the Bollywood film Hum Kisise Kum Nahin (2002) has taken the internet by storm. Thousands of people have seen the video ever since it was uploaded on Instagram by a handle that goes by the name of Oosm.

The video seems to be shot in a village as the shepherd takes his herd through a barren land. In addition to the shepherd, two little boys are also seen in the video. One of the boys follows the shepherd and expertly matches dance steps with him, while the other plays flute of sorts and rides a donkey. It appears as if the animals are playing the role of background dancers in the video.

People on social media are showering loads of love on the video. Resultantly, it has garnered thousands of views and likes.

A number of users were in awe of the dancing style of the shepherd.

“Really friend this video is awesome. I have not liked anyone’s video but I have liked yours. You have great dance moves,” one user wrote.

Directed by David Dhawan, Hum Kisise Kum Nahin was not a success at the box office but some of its songs still remain popular. It starred Ajay Devgn, Aishwarya Rai Bachchan, and Sanjay Dutt in lead roles, while Amitabh Bachchan played a pivotal supporting character.