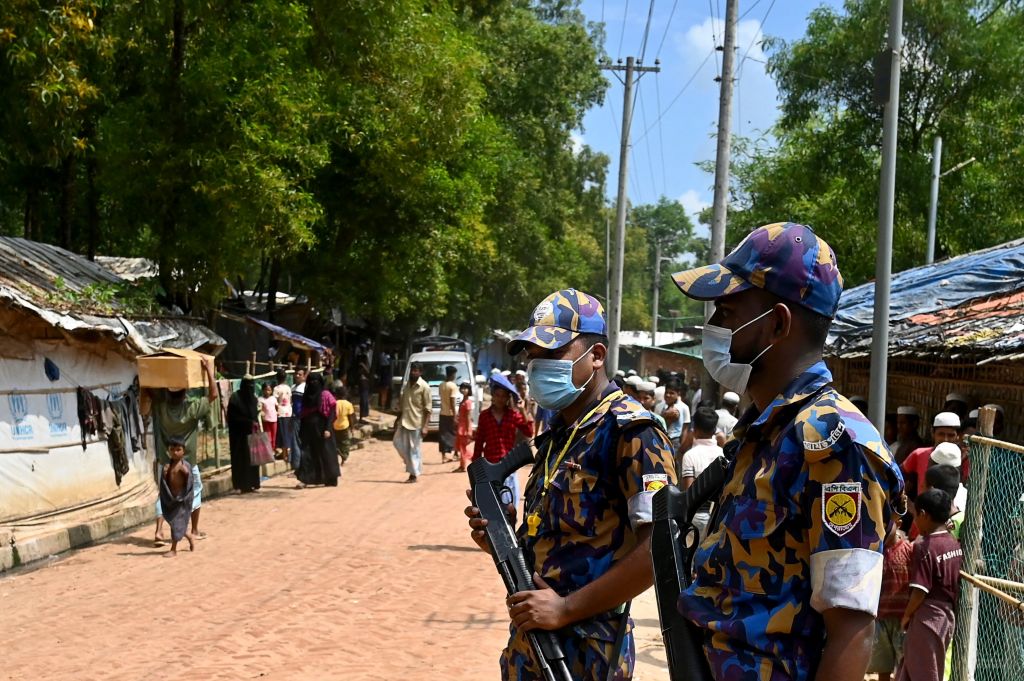 Members of the Armed Police Battalion stand guard near the office of slain community Rohingya leader Mohib Ullah, who was shoot dead by gunmen last month, at Kutupalong refugee camp in Ukhia on October 6, 2021. (Photo by MUNIR UZ ZAMAN/AFP via Getty Images)

GUNMEN killed at least seven people and left others wounded in an assault on Friday (22) on an Islamic seminary in a Rohingya refugee camp on the Bangladesh-Myanmar border, police said.

The attackers shot some victims and stabbed others with knives, a regional police chief said.

The killings come as tensions mount in the camps that house more than 900,000 refugees from Myanmar, after a Rohingya community leader was shot dead outside his office three weeks ago.

Four people were killed instantly in Friday’s attack and three others died at a hospital in the Balukhali camp. Police did not say how many people were wounded.

“We arrested one attacker immediately after the incident,” Shihab Kaisar Khan, regional chief for an armed police battalion, told reporters.

The man was found with a gun, six rounds of ammunition and a knife, he added.

Many Rohingya activists have gone into hiding since the killing of rights advocate Mohib Ullah by unknown assailants.

Some activists have blamed the Arakan Rohingya Salvation Army (ARSA) for the killing. ARSA is the militant group behind attacks on Myanmar security forces in 2017 that set off a military clampdown and a mass exodus into Bangladesh of 740,000 Rohingya.

The armed outfit has denied the allegations.

Activists say there is a mounting “climate of fear” in the camps. Police said security had been tightened as they investigate the causes of the latest shooting.