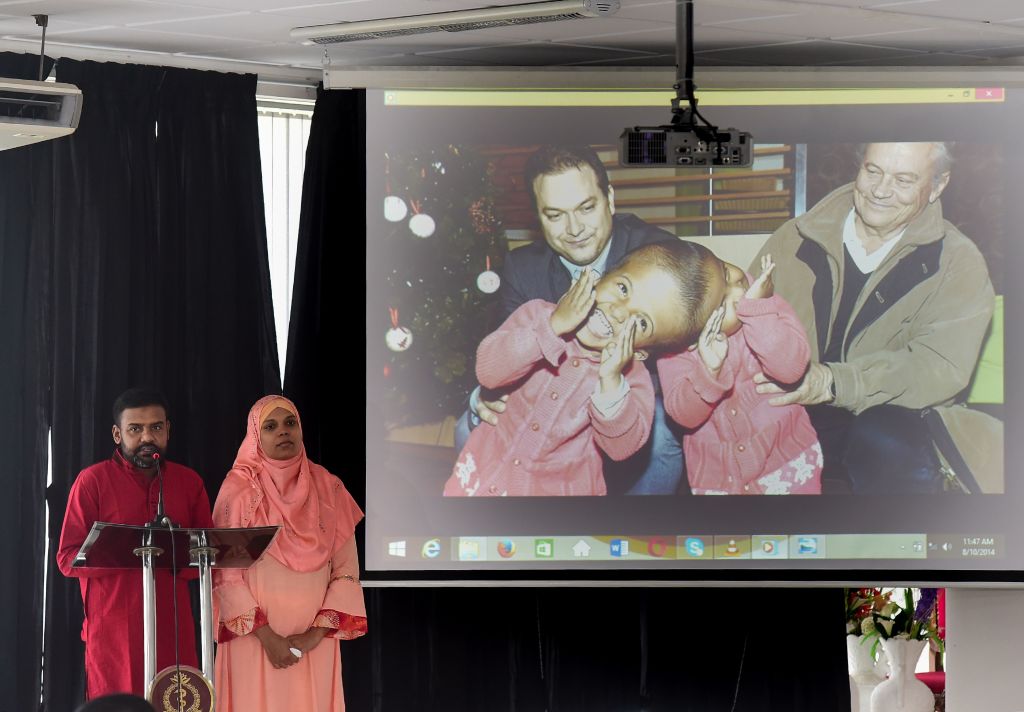 Parents of the conjoined twins speaks during a press conference, after doctors separate Bangladeshi twins joined at head, at the Combined Military Hospital (CMH) in Dhaka on August 10, 2019. – Bangladeshi twins who were joined at the head were recovering on August 2 after Hungarian surgeons performed a marathon 30-hour operation to separate their skulls and brains. (Photo by MUNIR UZ ZAMAN/AFP/Getty Images)

Conjoined Bangladeshi twins who were separated last week are in a stable condition, the team of Hungarian and Bangladeshi doctors who carried out the marathon operation said Saturday.

Three-year-old Rabeya and Rukaya who were joined at the head suffered from a rare embryological disorder affecting an estimated one in every five to six million births.

The girls were recovering after the 30-hour operation to separate their skulls and brains at the Combined Military Hospital (CMH) in Dhaka.

A surgical team of 35 Hungarians and more than 100 Bangladeshi doctors took part in the delicate procedure which they dubbed “Operation Freedom”.

The girls were in stable condition after the final separation, the last phase in a lengthy series of surgeries since last year, said Gergely Pataki, founder of Action for Defenceless People Foundation (ADPF) which led the huge team of doctors.

“But keeping in mind that such rare complicated surgical procedures has its risks, complications might still occur,” he told reporters at a press conference in CMH.

The girls have undergone two neurosurgical operations and 44 plastic surgeries so far.

Before the surgery doctors had said there was only a 50 percent chance of the twins surviving.

According to ADPF, only a handful of operations to separate twins joined at the head have been successful.

The Hungarian charity was set up in 2002 by neurosurgeon Andras Csokay and plastic surgeon Pataki to provide free surgery to poor people in Hungary and abroad.

In the first phase of surgery in Bangladesh last year, the shared blood vessels of the twins’ brains were separated in a 14-hour operation.

The twins’ overwhelmed mother Taslima Khatun said she cried tears of joy when one her daughters spoke to her on Saturday.

“One of my babies this morning told me, ‘Mother take me on your lap.’ This gave me huge peace of mind. I’m so very happy,” she said.

She was however concerned about whether the twins would make a complete recovery.

Anaesthesiologist Marcell Csapody said they were “hopeful and optimistic” the twins would make a full recovery but had to be realistic as the youngsters were not yet completely out of danger.

“We have to be optimistic and (simultaneously) realistic,” he said.

ADPF has performed around 500 reconstructive surgery operations in Asia and Africa, including for Rohingya Muslim refugees in Bangladesh.