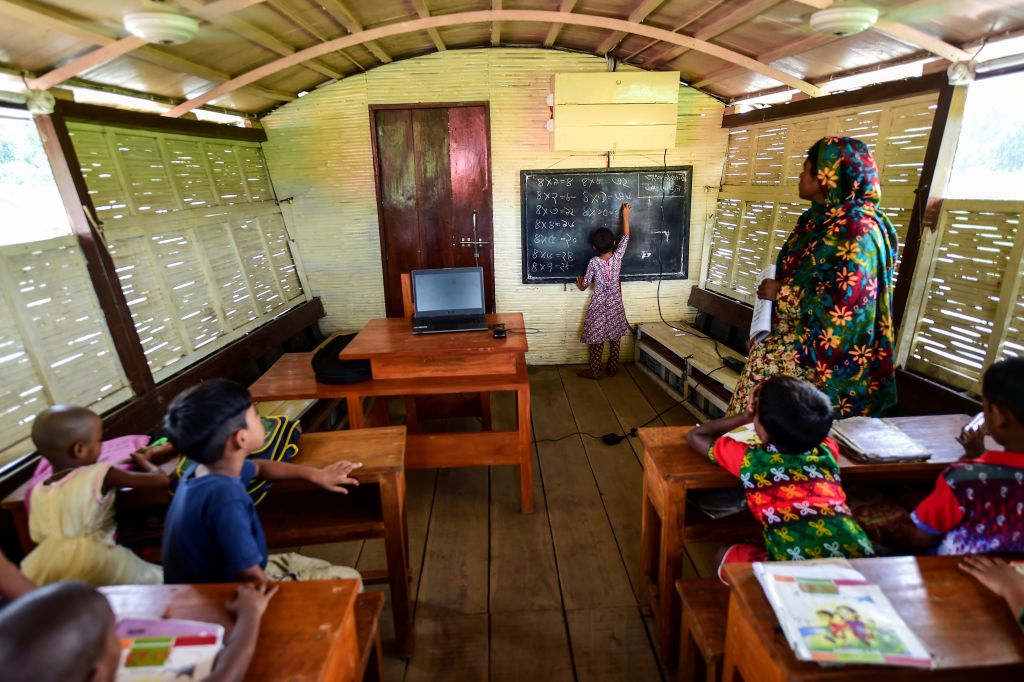 Dozens of students packed onto a boat docked in a flood-prone area of Bangladesh listen closely to a lesson highlighting the natural life of the rivers around them.

It is a normal day on a school boat project which aims to keep students in classes during monsoon season – and teach them about a changing climate in a country facing increasingly devastating floods fuelled by global warming.

The project is at the vanguard of a global movement pushing for schools to teach children about the impact of a rapidly warming world, with countries from Italy to New Zealand also putting climate change onto the curriculum.

Students aged five to 11 in northern Bangladesh study a curriculum based on water and environment, from a nature-based alphabet to watching documentaries on climate change and how to farm more sustainably, taught on about 20 wooden boats.

“They are actually standing on the ground zero of climate change,” said Mohammed Rezwan, executive director of the Dhaka-based Shidhulai Swanirvar Sangstha non-profit group which runs the project.

“They are the future citizens. If we provide them with timely education on climate and how to survive the present challenges and prepare them for future, bigger, challenges then actually they will be able to adapt to the changing climate.”

Education has been highlighted as a key plank in tackling climate change by the United Nations education body UNESCO amid warnings from scientists that world leaders are failing to take sufficient action to curb global warming.

The move comes as students worldwide follow the lead of Swedish climate activist Greta Thunberg and strike on Fridays, calling for governments and companies to take action to curb rising greenhouse gas emissions.

But many students taking part in the swelling global youth climate movement say they are being failed by their schools.

The youth-led Teach the Future campaign network in Britain is demanding a new UK law that would instruct all schools to teach climate issues.

The group’s draft climate emergency education bill, thought to be the first education legislation in Britain to have been written by students, was unveiled at a packed event in the lower house of parliament on Wednesday this week.

Teenagers rubbed shoulders with at least 60 lawmakers from across the main parties at the launch, hosted by the youngest elected member of parliament, 23-year-old Nadia Whittome.

“We have done our homework,” said Zamzam Ibrahim, 25, president of the National Union of Students which co-founded Teach the Future, as she presented the campaign’s demands.

“To avoid us repeating the failures of the past, our education system must do better to equip young people with the knowledge, the skills and the agency to tackle these crises.”

Many eduction experts, from Ethiopia to Germany, believe schools must do better on teaching climate issues, said Angus Mackay, a director at the U.N. Institute for Training and Research (UNITAR).

“Even where climate is very clearly within the curriculum it tends to be limited to, say, geography, and the information is sometimes quite out-of-date.”

UNITAR has created a package of courses for teachers which, if completed, allows them to gain accreditation as a qualified climate teacher to help tackle the knowledge gap.

Schools should also cover climate issues across subjects ranging from maths to science to home economics, added Mackay, in order to train the current “climate generation” to consider sustainability across every area of life.

While much attention has focused on a lack of climate topics in classes, some climate education experts have also pointed to a need to look at mental health to help students struggling with the scale of the issue.

A small study based on 383 undergraduate biology students at the U.S. University of Michigan found lessons on climate change left students feeling worried and powerless, finding that lessons should aim to empower students to take action.

Child psychologists and researchers have warned children are suffering from ecological grief over the damage caused by climate change and its impact on their lives, which can be fuelled if they are overloaded with bad news.

Climate educator Megan Herbert, who wrote a picture book in 2017 on climate change aimed at children aged five upwards, said parents and teachers should be aware of the risk of overwhelming young people but not be put off from discussing the issue.

Extreme weather events, news coverage, and increased discussion of the issue in popular culture all mean that many children are becoming aware of global warming at a young age.

“This is something that’s part of their future whether they like it or not. It’s a responsibility to talk to them about it,” said Herbert, author of “The Tantrum that Saved the World” about a girl whose home is besieged by animal and human climate refugees.

“It’s up to us to really work the healthiest ways to talk about this so that children aren’t paralysed with fear and they know there are solutions.”