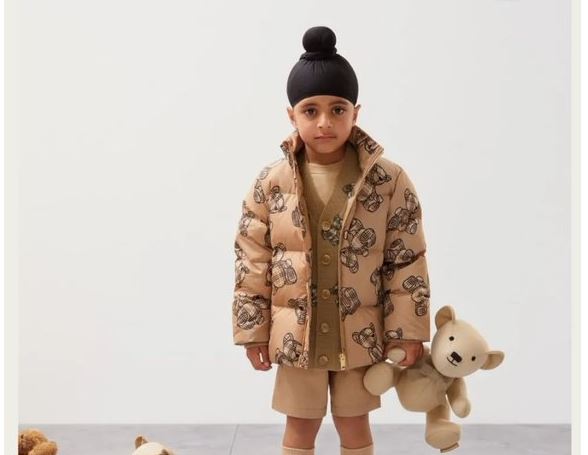 Londoner Sahib Singh was recently featured in Burberry’s Children Autumn-Winter 2022 collection advertisement, sporting a patka, a head covering which is worn by many Sikh children before they begin wearing a turban.

He is surrounded by teddies inspired by the iconic Burberry Thomas Bear, wearing the label’s signature honey-brown shade.

“So proud of my son Sahib Singh, the first sikh boy wearing a patka to represent #Burberry,” his father Ranj Singh Bhogal wrote on Twitter.

“We are still trying to comprehend how big this has gotten!” he told Vogue magazine. “The South Asian community has pulled out all the stops to shower love on our little Singh.”

Post the photo shoot, Sahib is inundated with congratulatory messages. Many on social media are now promoting the photographs as an example for promoting ‘inclusivity and diversity’.

His mother Harjot Kaur, who runs his Instagram account, termed the assignment ‘truly a milestone moment’. Kaur said she wished for all Sikh boys to be proud of their heritage. “Wear their patkas and paghs (turbans) with pride and confidence,” she added.

Kaur wrote on Instagram: “We have felt a few disappointments when Sahib isn’t chosen for a job. We have never told him about any shoots until he’s fully confirmed as he doesn’t need to feel the emotions involved. The joy and pride I felt at the shoot was overwhelming. I couldn’t hold back tears. So grateful to them (Burberry) for pushing boundaries.”

Singh is represented by South Coast Kidz, a leading children’s talent agency in the UK. He has previously worked with brands like John Lewis, a fashion and home furnishing company.