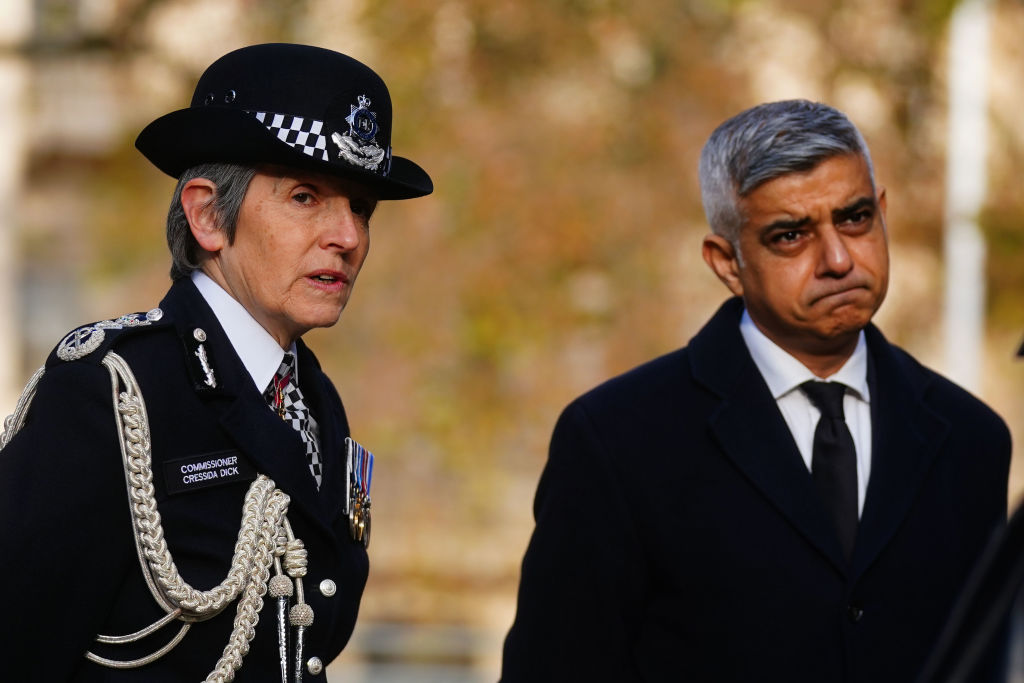 LONDON, ENGLAND – NOVEMBER 29: Metropolitan Police Commissioner Dame Cressida Dick with Mayor of London Sadiq Khan stand at the National Police Memorial on the Mall ahead of a memorial service to remember and celebrate the life of Metropolitan Police Sergeant Matt Ratana at The Royal Military Chapel in Westminster on November 29, 2021 in London, England. Sgt Ratana was fatally shot in September 2020 by a handcuffed suspect, Louis De Zoysa, who was being taken into custody at the Croydon custody centre. Sgt Ratana did not receive a full force funeral at the time due to Covid-19 restrictions. (Photo by Victoria Jones – Pool/Getty Images)

London mayor Sadiq Khan has said that he has ‘been disturbed by the apparent degree of bias’ in the draft report over the handling of former Metropolitan police commissioner Cressida Dick, media reports said.

Sadiq Khan has written to home secretary Priti Patel regarding the report by Sir Tom Winsor, the former chief inspector of constabulary.

The Guardian reported that the report has found that Khan did not follow due process and that Dick was unfairly treated.

It also called the mayor’s actions and decision-making “irrational” and “unreasonable”.

According to reports, Khan is consulting lawyers and believes the report is factually incorrect as well.

“While Sir Tom has inexplicably refused to provide me with a final version of his report to you, his draft findings … were clearly biased, and in many instances outside his terms of reference and unsupported by the evidence,” Khan wrote in the letter.

“It is clear from the draft that was provided and subsequent exchanges that he intends to present as fact accounts from the previous commissioner and her team, while ignoring or downplaying the extensive contradictory evidence provided.

“Sir Tom Winsor has failed to recognise almost any of the litany of scandals that occurred in the last two years, many of which you and I discussed at the time, which led to my loss of confidence in the commissioner.”

Dame Cressida quit in February when Khan said he had lost confidence in her leadership. She was the first woman to lead the UK’s biggest police force.

She said she had to resign from the role after London’s mayor made it clear to her he had no confidence in her leadership.

It followed cases of sexism and misogyny among some Met officers. She also faced criticism over the murder of Sarah Everard by a serving Met officer last year, and a series of other scandals.

A spokesperson for the mayor has said that Khan lost confidence in the commissioner after a series of scandals saw trust in the Met police plummet to record lows.

A Home Office spokesperson said: “Following the standing aside of the Commissioner earlier this year, the Home Secretary asked Sir Tom Winsor to carry out a formal review into the circumstances leading up to Dame Cressida’s departure from her role.

“The decision on the publication of the report will be made in due course.”

Dick left with a severance package of £166,000, negotiated with City Hall. Her replacement, Sir Mark Rowley, is due to start as commissioner on 12 September.