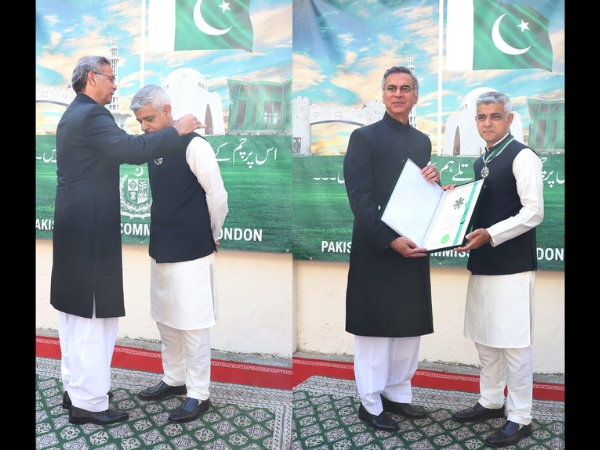 The Independence Day of Pakistan was marked by a flag-hoisting ceremony at the Pakistan High Commission London on Sunday (14) as the South Asian nation turned 75. Sadiq Khan, the mayor of London, was also felicitated at the event.

Moazzam Ahmad Khan, Pakistani High commissioner to the UK, hoisted the national flag of Pakistan in the presence of the diaspora community and British friends of Pakistan who turned up in large numbers to attend the Diamond Jubilee celebration of Pakistan.

In his address to the community, Khan wished Pakistanis on the 75th anniversary of the country’s Independence and termed it an important milestone in the national life. He paid glowing tributes to Quaid-i-Azam Muhammad Ali Jinnah, Allama Iqbal and other heroes of the Pakistan Movement who achieved an independent state for the Muslims of the sub-continent.

Giving an historical overview of Pakistan, the high commissioner said Pakistan had seen many ebbs and flows in its short history of 75 years but had successfully overcome all the external and internal challenges.

On Pakistan-UK relations, Khan underscored the importance of historical and deep-rooted bilateral ties and expressed that growing bilateral trade and economic ties were a manifestation of the mutually beneficial relations.

He commended the Pakistani diaspora for their vital role in forging closer ties between the two countries.

At the ceremony, Sadiq Khan became the first British politician to receive the prestigious Sitara-i-Pakistan for his contribution towards building closer and cordial ties between Pakistan and the UK, as well as his services to various communities in the UK.

On receiving Sitara-i-Pakistan, Sadiq Khan, said, “I am both humbled and honoured to accept the Sitara-i-Pakistan on this special day as Pakistan marks 75 years of independence. Over the past few decades, we’ve undoubtedly seen the fruits of the relationship between our two countries, especially here in London, where those of Pakistani heritage have made – and continue to make – a hugely positive contribution to our society, economy and culture.

“I look forward to continuing to work with the High Commission to strengthen our relationships and promote opportunities for growth as we work to build a better London for everyone.”

A beautiful portrait of the Quaid-i-Azam, painted by a young British Pakistani artist Amina Ansari, was also unveiled on the occasion to pay special tribute to the founder of the Pakistani nation.

The ceremony concluded with popular national songs by local singers.

Similar events were held at Pakistan Consulates at Birmingham, Manchester, Bradford and Glasgow.

The event coincided with the completion of 75 years of Pakistan-UK diplomatic relations.