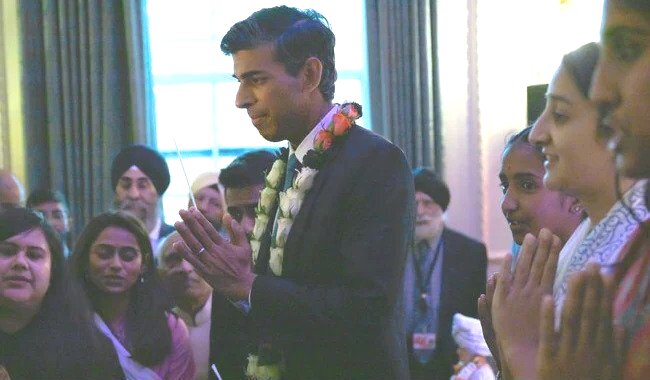 While mentioning the sacrifices made by his Nani, Sraksha, who grew up in rural Africa and later moved to UK, Sunak said, “Now, I think about today, I think about yesterday, I think of my Naniji, when she boarded that plane, as I told you about some decades ago, on her own to come into this country, not knowing when she would see her family again, and she’s not with me today. And I think what she would have thought about me standing here in front of you.”

Speaking at his first public engagement as prime minister, Sunak added, “I’ve said to many of you before, my story is your story. It is our collective story about what our families have done, what they have been through. And what it says is something amazing about our country. And the most incredible thing I did as chancellor was to light those diyas on Downing Street very soon after I was there. And I know how much that meant to all of you how much it meant to people around the world.”

Sunak’s Nani was born to Hindu Punjabi parents in Tanzania’s lion country. At the age of 16, she entered into an arranged marriage with Rishi’s Indian grandfather, Raghubir Berry, a railway engineer.

Usha, Sunak’s mother, was one of the couple’s three children. In 1966, Sraksha decided to take the risky step of moving to Britain, selling her bridal jewellery to pay for a one-way trip.

She gambled everything to give her children a better future, making her way alone to Leicester where she found a job as a bookkeeper. A year later her family joined her in Britain.

Sunak said that he learnt the value of hard work from his parents. “Wanting to be in service is because of my parents, and many of you have heard me talk about them in the past and the values that they raised me when working in my mom’s shop. And those values were about hard work. They’re about sacrifice, about education, and family,” he said.

The entrance hallway of No 10 through to the famous staircase was decked in flowers and Diwali lights. Sunak entered the room to huge cheers from the guests.

The new prime minister lit the Diwali lights and Vedic Shoklas were chanted by Hindu Priests and children.

Sunak highlighted that King Charles, in a goodwill gesture, offered him sweets as he performed his duty as head of state and formally appointed the new Conservative leader. “Quick confession I haven’t done all the usual things that I do. I didn’t light any diyas. More importantly, I did manage to get to get to Leicester and get my mitai. You will be pleased to know, his majesty king Charles did have Diwali mitai for me,” the prime minister said.

“A very special Diwali gift for me to be able to now have this opportunity to serve our country. And that is something that I know all of us have in common, whether we are Hindu, Sikhs, Jain, this idea of service is so incredibly important to all of us. So I wanted to say on behalf of the whole country, which I can now do with all of you. Thank you for what you do for your community,” Sunak told the 200 guests who have gathered for the event.