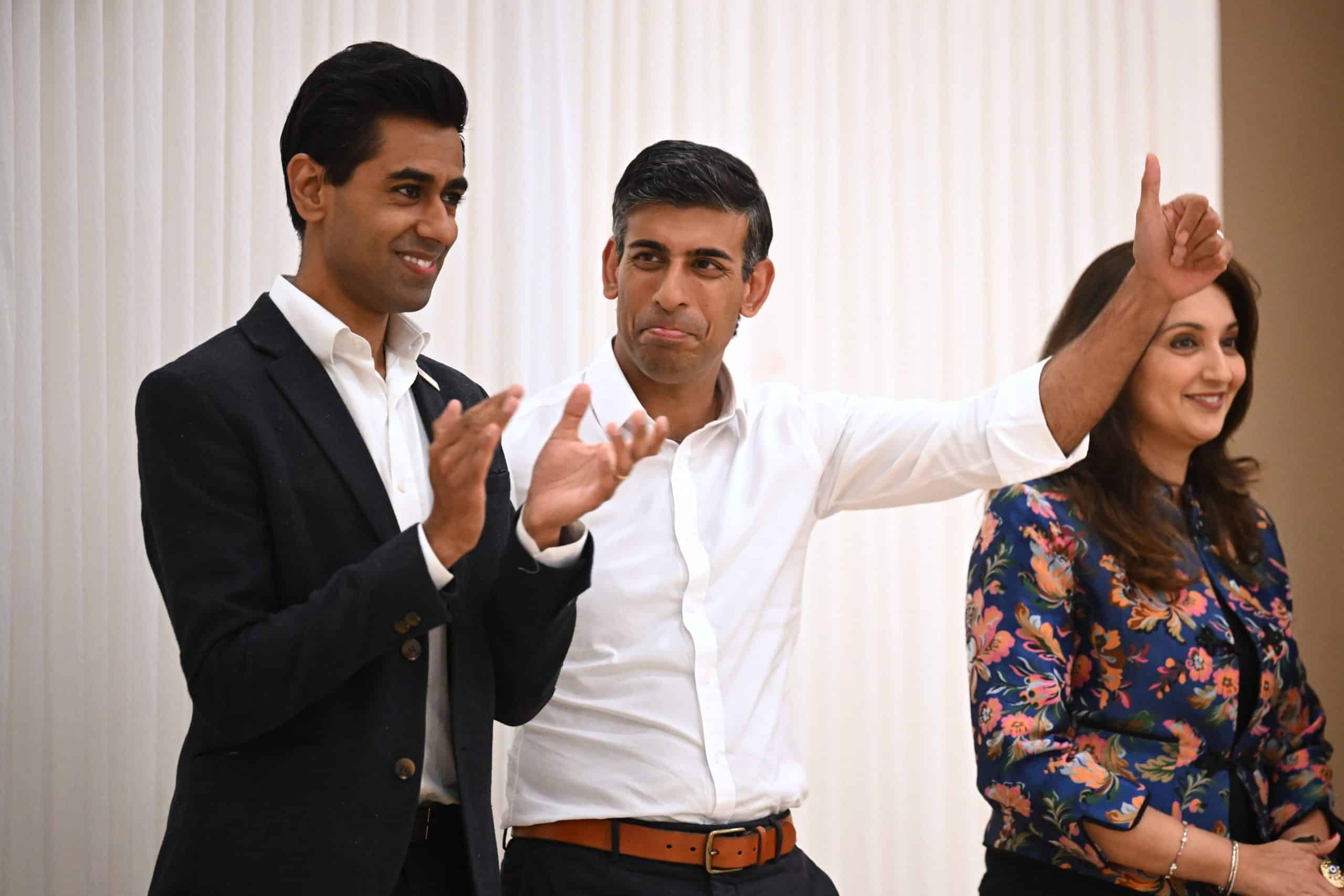 RISHI SUNAK, former chancellor and a candidate to be the next prime minister, received a hero’s welcome with loud cheering and Indian drums at a hustings event in north London on Monday (22).

Sunak’s popularity in the community was evident as more than 650 British Asians from across the country gathered to hear from him at an event hosted by the Conservatives Friends of India (CFIN).

The prime ministerial hopeful entered the Dhamecha Lohana Centre in south Harrow to applause, with a dhol player whipping up the audience into a frenzy of cheers and whistles.

“Aap sab mere parivar ho (you are all my family),” Sunak said in Hindi, after he had greeted the gathering with a mix of traditional greetings including “namaste, salaam, kem cho” and “kidda”.

The British Punjabi showed his affable side as he spent time interacting with guests who queued to greet him and take selfies.

Sunak’s self-proclaimed underdog status as the candidate trailing in all the polls seemed irrelevant as he mingled with the crowd like a rock star. He responded to comments of ‘see you at No 10 Downing Street’ with an emphatic: “That’s the plan, I’m giving it everything I got.”

The 42-year-old paid tribute to British Asian politicians who came before him, including Conservative peers Lord Dolar Popat and CFIN co-chair Lord Rami Ranger, who he said had “shattered the glass ceiling and served as an inspiration to my generation of politicians”.

“Without your incredible work and sacrifices, I wouldn’t be standing here,” Sunak added.

He was showered with blessings by elderly attendees in the crowd, while younger Asians patted him on the back. Eight-year-old Tanish Sahu got a special picture as Sunak carried the boy in his arms.

The son of Indian parents whose family immigrated from Punjab, India, to East Africa before arriving in the UK, Sunak could become Britain’s first south Asian prime minister if he beats foreign secretary and frontrunner Liz Truss in the leadership race.

Addressing the gathering, Sunak said, “Sixty years after my naniji (maternal grandmother) boarded a plane from East Africa to come here, her two great-granddaughters – my two young girls – played in the street outside their home, painted rangoli on the doorstep, lit diyas and had fun like so many other families on Diwali day. But the street was Downing Street and the door was the door to number 11.”

An audience member shouted, ‘Soon to be number 10’.

Sunak added, “I am enormously proud of where I’m from. It is a huge part of who I am. But it also gives me great joy to live and belong in a country where it was possible for someone like me to become chancellor. Now what we need to do, to make sure that is not the end of my story, but just the beginning.

“So I humbly ask for your support, not just to be your party leader, but also the next prime minister of our great country.”

Sunak currently trails Truss by 32 percentage points, a YouGov poll for Sky News showed last Thursday (18). She was on 66 per cent to Sunak’s 34 per cent.

However, his supporters – such as the transport secretary, Grant Shapps – have not given up hope, and believe he could claim an unexpected victory over Truss. Shapps pointed to the 2015 general election and the 2016 EU referendum, when polls and pundits were both proven wrong by the electorate.

On the key dividing line in the leadership contest between the two finalists, Sunak reiterated that his opponent’s tax plan would end up in a “moral failure” of a Tory government to let struggling households fall into “destitution” over the tough autumn and winter months, with imminent spiralling energy costs.

He told the audience, “I want to help everybody and focus extra help on vulnerable people… Liz’s plan is to say tax cuts for those people.

Sunak also made a thinly-veiled dig at his former boss and current prime minister Boris Johnson, whose tenure has been blighted by a series of controversies.

When Sunak resigned from the cabinet in July, a move that was seen as the first step to Johnson’s downfall, he said in his resignation letter that “the public rightly expect government to be conducted properly, competently and seriously”.

Sunak also took a swipe at London’s Labour mayor Sadiq Khan, as he thanked the Harrow public for the local election result in May which saw the Conservatives take control of the borough from Labour for the first time since 2013.

“We have got to face it and we now know how, because thanks to the heroic efforts of many people in this room, they worked hard, because they realised Harrow deserved better. They campaigned hard, they fought hard and because of your victory Harrow got better with a Conservative council.”

Speaking in front of a largely British Indian audience, Sunak also revealed that he wants to change the UK-India relationship to make it a more two-way exchange that opens up easy access to UK students and firms in India. India and the UK concluded the fifth round of negotiations towards their free trade agreement (FTA) last month, with the aim to sign a comprehensive and balanced FTA by the end of October.

“We know the UK-India relationship is important. We represent the living bridge between our two countries,” Sunak said, in response to a question about bilateral ties from CFIN co-chair Reena Ranger.

“We are all very aware of the opportunity for the UK to sell things and do things in India, but actually we need to look at that relationship differently because there is an enormous amount we here in the UK can learn from India.

He concluded by saying if he could leave behind one legacy as prime minister, it would be to make the UK’s education system the best in the world.

Sunak, who went to Winchester, Oxford, and then Stanford in the US, said, “I know it’s as important to all of you as it is to me. I wouldn’t be standing here if it wasn’t because my parents, like many of you here, saved and sacrificed to provide their children with the best education that they could.

“It is the most important thing families do to help their children have a better life. And I believe we should create an education system in this country that is the envy of the world. If I am asked what do you want your legacy to be? It will be that I have left this country with an unbelievable education system.”

Later, Amita Mishra, trustee of the Shree Jagannatha Society UK, handed over a set of gold-plated deities from India to Sunak.

“We are working on creating a Jagannath Temple in London and this gift is a special blessing all the way from India,” said Mishra. She was accompanied by a priest who recited a victory shloka from the Bhagavad Gita as the deities were handed over to Sunak on stage.

A British Sikh Tory in the crowd waited hours to get a special bottle of Jack Daniels whisky signed by Sunak – despite both him and the former chancellor being teetotallers.

“I don’t drink, but this is a special gift I received on my birthday and now with this signature it has become historic,” he said.