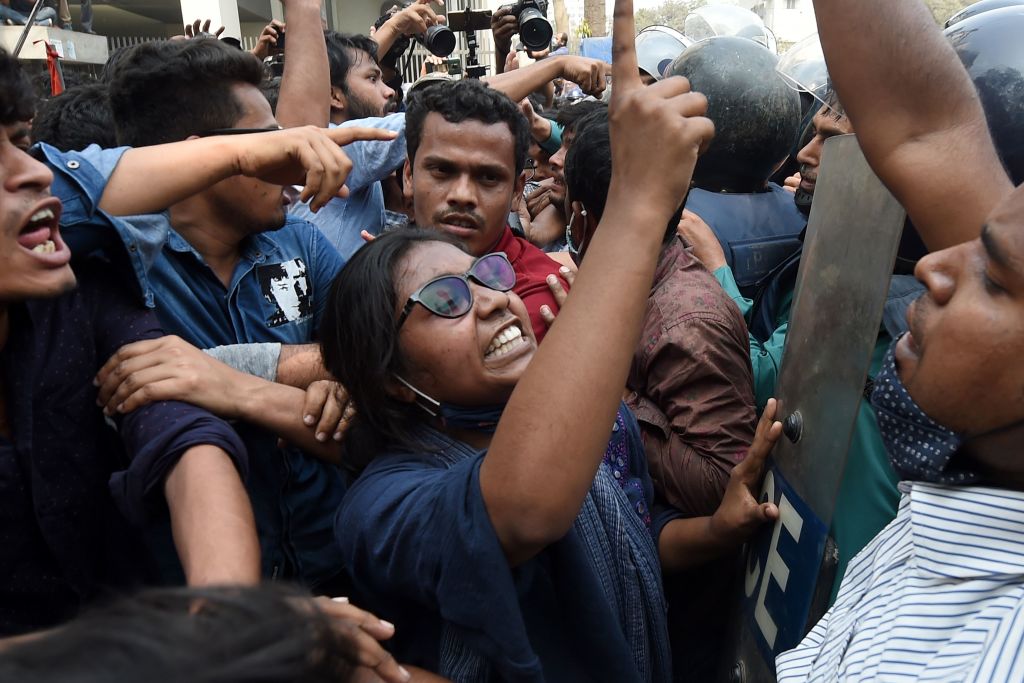 Activists from the left parties shout slogans during a demonstration in Dhaka on March 1, 2021, following the death of writer Mushtaq Ahmed in jail months after his arrest. (Photo by MUNIR UZ ZAMAN/AFP via Getty Images)

The rights watchdog released a report identifying 86 political activists, businessmen and student members of the opposition Bangladesh Nationalist Party (BNP) who went missing over the past decade.

It said disappearances have become a “hallmark” of prime minister Sheikh Hasina’s rule since 2009, a tool for curtailing free speech and criticism.

“We want the UN and other international experts to launch an independent investigation, because it has become quite clear that the Bangladesh authorities are willing to look away and even provide impunity for these kinds of abuses,” said Meenakshi Ganguly, HRW’s South Asia specialist.

HRW called for “targeted sanctions” on members of the Rapid Action Battalion, an elite police squad accused of carrying out many of the disappearances.

There was no comment on the allegations from the government or the Rapid Action Battalion, which has been accused in the past of rights abuses including extrajudicial killings.

Other rights organisations have said 600 people have been seized in the past decade, and that those who have been freed are too scared to speak out.

The Odhikar monitor reported 16 suspected enforced disappearances in the first half of 2021.

Senior government officials have in the past denied that security agencies had seized anyone, saying the alleged victims have gone into hiding.

In one of the cases listed by HRW, low-level BNP activist Mohammad Parvez Hossain disappeared in December 2013, allegedly abducted with three friends.

“They went out to buy birthday flowers for the son of a party colleague and never returned,” said his wife Farzana Akter, who was pregnant at the time.

A few weeks later, Hasina won a general election by a landslide.

She now relies on her family to help raise her 10-year-old daughter and eight-year-old son, who has never seen his father.

“If the government says my husband is in hiding, then why don’t they find him,” she said.

“He didn’t commit any crime, didn’t kill or rob anyone. He was not corrupt. Why would he be killed”.