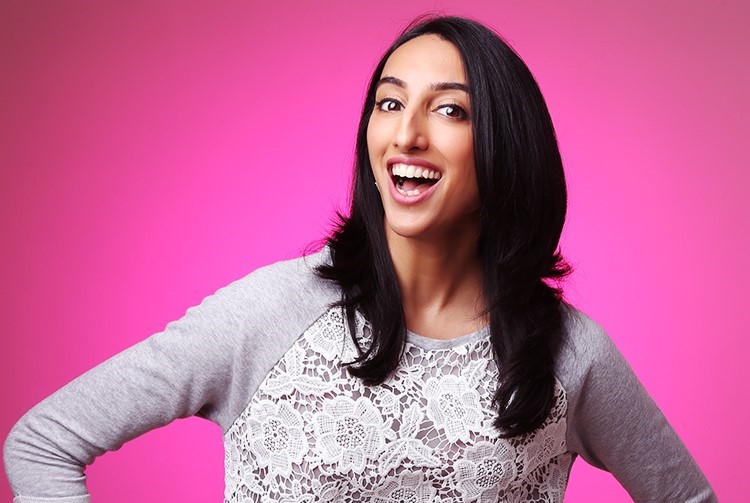 THE live British Asian comedy scene going from strength to strength is perfectly illustrated by the number of stand-up shows, top talents, and fast emerging newcomers like Tej Dhutia.

The funny comic introduced herself with a fabulous appearance on the televised BBC Asian Network show and is fast making a name for herself on the stand-up circuit. She is generating interest with her observation filled brand of humour and recently joined a great line-up on the popular Desi Central comedy shows.

Eastern Eye caught up with the Midlands-based talent you will be hearing a lot more about to discuss comedy, her forthcoming show, how being funny has helped in real life and why her husband doesn’t mind having jokes made about him.

What is it that first connected you to stand-up comedy?
I never planned to do stand-up comedy; I sort of just fell into it. I was on maternity leave from work and one day while breastfeeding my son, I came across an advert on social media to do stand-up for charity. Out of desperation to do something outside of being a mum, I signed up. I thought it would be a one-off thing, but it’s turned into so much more.

What was the experience like of performing as part of the BBC Asian Network show?
It was surreal. It was my first big gig, so I was super nervous, but I felt blessed to be given such a massive platform. I remember when I first read the email, I thought this can’t be happening to me. Comedy is my side hustle and it’s working out so well. I also felt vulnerable because it was going to air on BBC Three and people had the power to judge me from the comfort of their living rooms.

How do you feel being part of the Desi Central show with established names?
I’ve been going to Desi Central gigs since before I was doing stand-up, so it feels crazy to have my face on their posters. It is incredible to be on line-ups with established comedians. I feel like a baby comedian as they have much more experience, but they have all been supportive and fun to gig with.

What can we expect from your stand-up performance?
Story-telling and observational comedy is what I do. I’d say my humour knows no boundaries. I will joke about all the crude, rude things that I wasn’t allowed to talk about while growing up in a strict Indian household. I deliver an honest look on life and the experiences I encounter being a south-Asian daughter, wife, and mum with generational traumas on a journey of healing.

How does your husband feel about you making jokes about him?
(Laughs) He’s scared to talk to me in case I use what he says as material. We’ve been together 12 years now and he’s just happy I’ve finally found a way to channel my frustrations and issues and turn them into jokes, instead of taking them out on him. I’m kidding! Jokes aside, he’s a secure guy and supportive, and I love him dearly.

Who is your own comedy hero?
I don’t think I have one. I’m too busy being a mum, making roti, and accidentally vacuuming up Lego to just sit down and enjoy comedy on the telly.

Has being funny helped you in real-life situations?
Oh, yes. You have to develop a thick skin being a stand-up for when you get heckled. And as a result, people’s microaggressions don’t bother me anymore. I don’t take myself as seriously as I once did either. I would say people don’t bother me, but my kids can still wind me up and make me feel like a really crazy woman.

Who is the funniest person you know in real life?
I think I am the funniest person I know. Spoken like a true narcissist! I’m constantly doing something dumb or being mischievous and making myself laugh. Aside from me, I’d say my mum is so funny. I’ve got a bunch of jokes centred around her about the funny things she says and does.

Where is the strangest place or situation you have thought of a joke?
I think of my best jokes when I am in the shower.

What inspires you?
I want to normalise conversations about taboo subjects among the south-Asian diaspora. I battled with an identity crisis because I grew up in a strict Indian household, where I wasn’t allowed to discuss anything while watching it all happen around me in a western world. I grew up feeling lost and my comedy attempts to make sense of this and hopefully reach out to people that may be feeling the same.

Why do you love stand-up comedy?
I love stand-up because I can be unapologetically me. I can be silly and rude and uncensored (all the things a south-Asian woman shouldn’t be) and get away with it and it’s liberating. And on top of that, I get paid to do it. Stand-up comedy is my therapy.