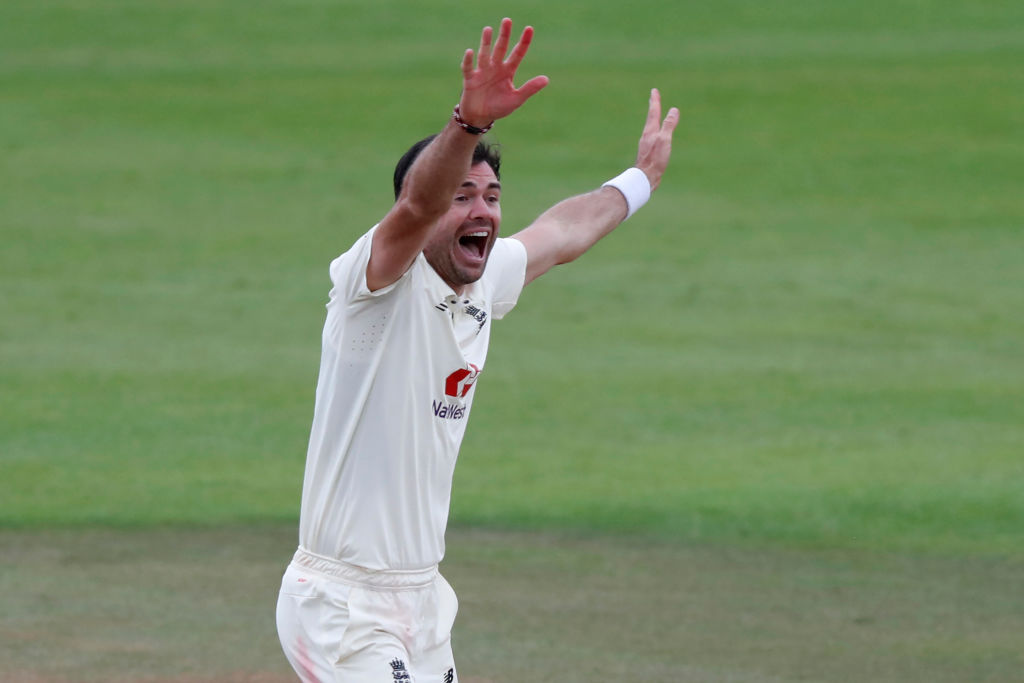 England’s James Anderson appeals successfully for a LBW (leg before wicket) decision against Pakistan’s Abid Ali, his 599th wicket in test cricket on the fourth day of the third Test cricket match between England and Pakistan at the Ageas Bowl in Southampton, southern England on August 24, 2020. (Photo by ALASTAIR GRANT/POOL/AFP via Getty Images)

JAMES ANDERSON was trapped in the England dressing room as bad weather delayed his bid to reach 600 Test wickets in the third and final Test against Pakistan at Southampton on Tuesday (25).

The last day should have started at 1000 GMT but, with rain still falling following an overnight downpour, the covers remained in place at the Ageas Bowl and there was no play before lunch.

Umpires Richard Illingworth and Michael Gough are due to hold an inspection at 1240 GMT.

It may still be several hours before the match can restart, though the forecast for the rest of the day is brighter.

England, 1-0 up in the three-match contest, are on the brink of their first Test series win over Pakistan for a decade.

If no more play is possible, 38-year-old paceman Anderson could be left on 599 Test wickets for some time.

There is uncertainty as to whether England’s rescheduled tour of Sri Lanka or a Test series in India pencilled in for the New Year will take place, with the coronavirus pandemic still a major threat to the cricket calendar.

Anderson was left just one wicket shy of becoming only the fourth bowler — and first paceman — to reach the landmark figure of 600 Test wickets as a combination of poor catching, bad weather and determined Pakistan batting thwarted him on Monday.

Anderson, denied an early breakthrough when Jos Buttler dropped a routine chance to reprieve Shan Masood, returned late in the day to have opener Abid Ali lbw for 42 after Masood had fallen lbw, playing no shot, to Stuart Broad.

But that was as good as it got for Anderson, who ended a day cut short by bad light and rain with miserly figures of 1-18 from 12 overs.

– ‘Massive achievement’ –
“It is a massive achievement,” England coach Chris Silverwood said of Anderson’s looming milestone after stumps on Monday. “To finish strong tomorrow and see Jimmy get his 600th would be fantastic. I want to win the game. That’s my first and foremost.”

Pakistan, following on, are 100-2 — still 210 runs behind England’s mammoth first innings 583-8 declared, which featured a double century from Zak Crawley.

Azhar Ali, the Pakistan captain, is 29 not out following his first-innings century and Babar Azam is unbeaten on four.

Abid, who faced 162 balls, said: “England have a world-class bowling attack but the plan was to bat longer and that’s what I did.

“Azhar played a good knock in the first innings and Babar is there so we still have hope of finishing on a high.”

The only bowlers ahead of Anderson in the all-time Test list are three retired spinners — Sri Lanka’s Muttiah Muralitharan (800), Australia’s Shane Warne (708) and India’s Anil Kumble (619).

He might even have reached the landmark late on Sunday had not three catches been dropped off his bowling with the new ball.

“No one means to drop them,” said Silverwood. “Last night (Sunday) was gloomy but it’s still not an excuse.

“And Jos’s wobbled horrible as it came to him.”