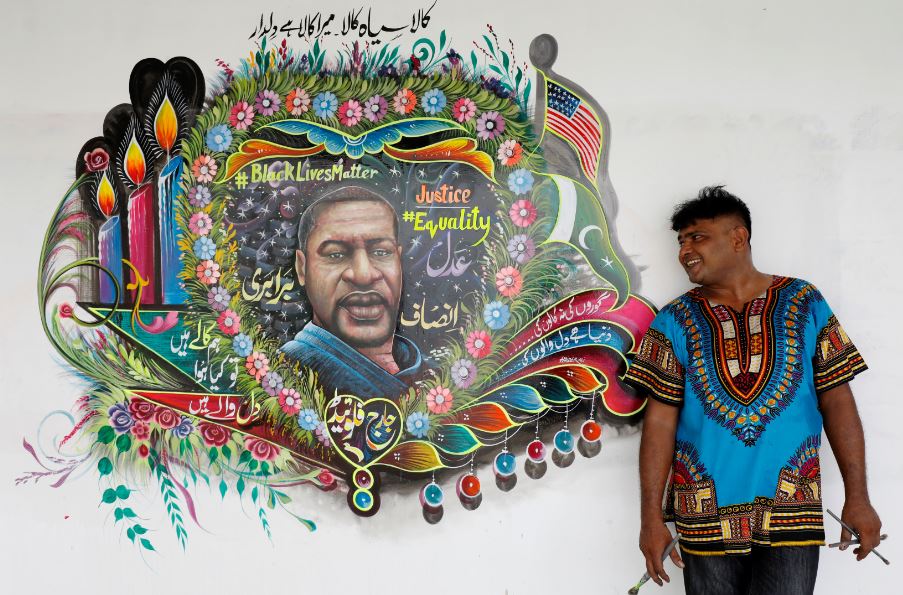 A truck artist  in Pakistan’s southern Sindh province has painted a large mural of the slain African American George Floyd on the wall of his home.

Haider Ali, 40, depicted Floyd surrounded by a colorful heart-shaped garland of flowers, with slogans such as #Black Lives Matter on one side and #justice and #equality on the other.

“This is a message of peace and love to all of Pakistan,” said Ali.

The mural stands out as a burst of colour on Ali’s porch wall in the southern port city of Karachi. On one side of the portrait, Ali painted candles burning in memory of Floyd and in the upper right-hand corner, an American and Pakistani flag next to one another.

The brutal killing of George Floyd by police in the US has sent shock waves across the world.

Ali, who said he was in tears when he watched the video of Floyd’s killing, makes his living as a truck artist in Sindh and often takes to the road, catching truckers in moments of rest, when they take a break and park their trucks at truck stops and on wide open fields by the roadside.

He said he has visited 40 states in the US, making the trip for the first time when he was 21. “I never faced any discrimination because I am a Muslim or a Pakistani,” he said. Being dark-skinned himself, Ali said he has been aware all his life of the many prejudices against people with dark skin in his own homeland.”

“Racism is more dangerous than coronavirus,” he affirms.

Floyd, a black man, gasped for breath in Minneapolis while being pressed under the knee of a white police officer for several minutes. His death sparked protests in the US and elsewhere, challenging activists from all backgrounds to rise up against abuse of police power, racism and inequality.