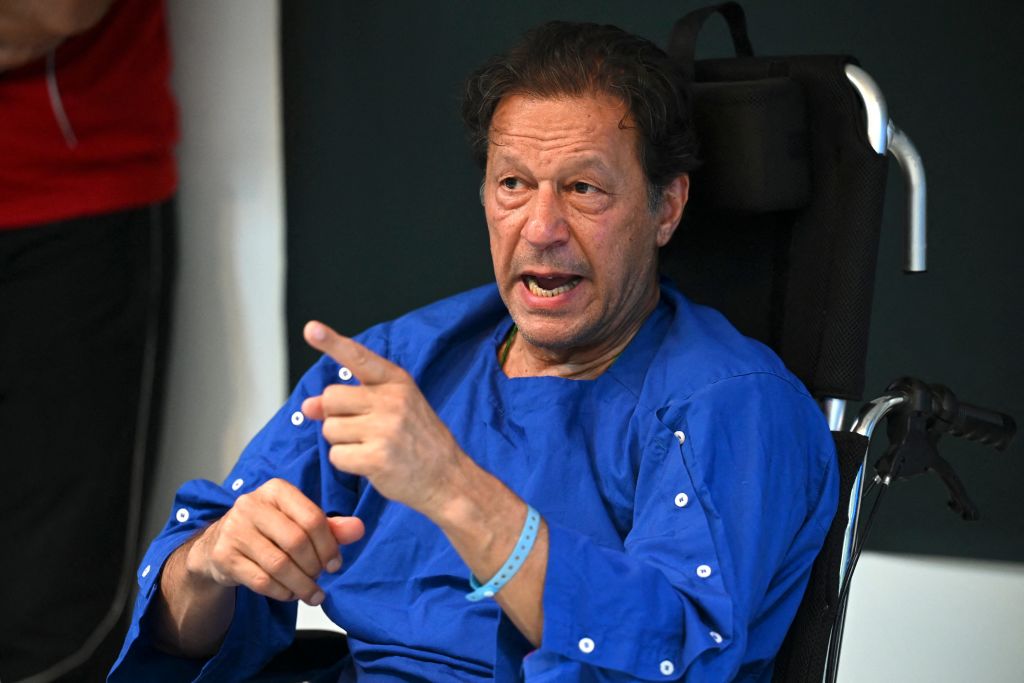 In this picture taken on on November 4, 2022, Pakistan’s former prime minister Imran Khan addresses the media representatives at a hospital in Lahore, a day after an assassination attempt on him. – The assassination attempt on Khan and his accusation it was a plot involving a senior intelligence officer has pushed Pakistan into a “dangerous phase”, analysts say. (Photo by Arif ALI / AFP) (Photo by ARIF ALI/AFP via Getty Images)

Former premier Imran Khan has lamented that the US has been using Pakistan like a “hired gun” in the war against terror and America’s ties with his country are “very undignified” as compared to a very “civilised relationship” with India.

His comments came days after Khan signalled his readiness to mend ties with the United States after repeatedly accusing Washington of conspiring to remove him from power in April.

When asked by Public Broadcasting Service, an American public broadcaster, about his recent U-turn and his past remarks that America treats Pakistan “like a slave,” Khan said: “Firstly, I mean, it is just a fact that the Pakistan-US relationship has been lopsided.”

Khan, 70, who was ousted in April in a no-confidence vote, in an interview with the Financial Times this month said he wants to mend relations with the US if re-elected and no longer blames it for his removal as Pakistan prime minister.

Khan earlier had been claiming that he was the result of a conspiracy between prime minister Shehbaz Sharif and the US, a top security partner to Pakistan that has provided the country with billions of dollars in military aid.

Khan has repeatedly claimed that Donald Lu, the top American official dealing with South Asia in the US State Department, was involved in a ‘foreign conspiracy’ to topple his government.

Khan, the chairman of the Pakistan Tehreek-e-Insaf (PTI) party, suffered bullet injuries in the right leg earlier this month when two gunmen fired a volley of bullets at him and others standing on a container-mounted truck in the Wazirabad area, where he was leading the march against the government to press for snap elections.

He has blamed Prime Minister Shehbaz Sharif, Interior Minister Rana Sanaullah and Major General Faisal Naseer for hatching a plot to assassinate him.

“Well, I was very lucky. I had three bullets in my right leg and some shrapnel in my left,” he said.

“So, the two the flesh wounds are healing well. But the bone where my bone got cracked by the third bullet, that’s causing me a bit of discomfort. But I expect, in the next two, three weeks, I should be walking, putting weight on my leg,” Khan said.

General elections must be held in Pakistan less than 60 days after the dissolution of the National Assembly, which is set to dissolve in August next year.

When asked about his protest march against the government and why is his party pressing for an early election, Khan said: “We talk about the injustice that is taking place in this country, where these this cabal of crooks have been foisted on us. And, secondly, the economy has gone to the ground. Financial markets outside Pakistan and within the country have lost confidence in this government.”

“And all the economic indicators are going down. So, if they don’t hold elections immediately, it doesn’t bother my party, because we are gaining all the time. But our worry is that they will leave the country in a state where it will be beyond anyone’s control,” he added.